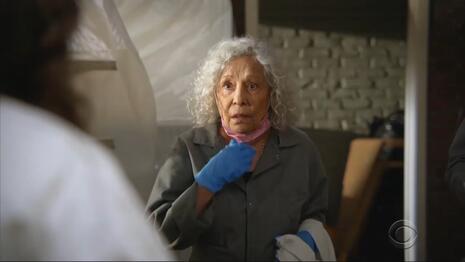 This season, CBS's woke courtroom drama All Rise has pushed the narrative of "systemic" cop killers and other BLM talking points.

This week, in the episode 'The Perils of the Plea,' on December 14, the show took the Black Lives Matter propaganda to a new level by having the victims of BLM's destruction defend the protests.

During the show, court stenographer Sara Castillo (Lindsay Mendez) visited her grandparents, Lupita (Renee Victor) and Miguel (Castulo Guerra), while they were working on rebuilding their store. An earlier episode had shown Sara come to comfort them as they cried over the damage. This time, Sara got upset when she erroneously thought they were criticizing the protests for it.

Sara: MM. Christmas without everyone's just not the same. I'm glad to be here with you two, though. Cures the holiday blues.

Lupita: Ever since the looting, I've been blue, too. Damn protests. It's all those people's fault.

Sara: Those people are protesters. They're not criminals. Not looters.

Sara: What is so funny?

Lupita: They've been nickel and diming us ever since the looting.

Sara: I thought you were against the protests.

Miguel: Unh-unh. They stand with us when we get deported. We stand with them when they're losing their lives.  ¿¿Que no?

Sara: Should have known better.

This dialogue is a display of woke intersectionalist fantasy. No, most immigrant small business owners do not stand with the BLM protesters who actively participated in or looked the other way as billions of dollars in property was destroyed in 2020. In fact, the Democratic Party's allegiance with BLM likely contributed to the surge in Latinos who voted for Trump. Black Lives Matter promotes the destruction of law and order. Without law and order, immigrant small businesses cannot survive.

The scene does get one fact correct: insurance often did not cover much of the damage that occurred during this year's BLM riots, despite liberals' dismissive assurances otherwise. Small business owners incurred the financial pain. Some may never be able to rebuild businesses they devoted their lives to creating.

At various points in the episode Sara's friend Emily (Jessica Camacho) dismisses the grandparents' loss by saying, "At least it's just property." Emily even castigates Sara for seeming too concerned with what was ruined. "It just seems like you have been more upset about lost property than lost lives," she says.

Leftists clearly have more experience with studying Marxism than starting a business. They have consistently dismissed the loss of people's property and livelihoods as no big deal. All Rise reflects this way of thinking. To use a term the woke like to toss around, the writers of All Rise showed a shocking lack of "empathy" in this episode for the human cost of property destruction.

This rant was brought to viewers in part by Ghirardelli and Vicks. You can fight back by letting these advertisers know what you think of them sponsoring such content.