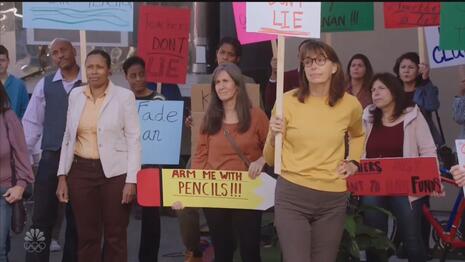 Apparently, writers for the NBC sitcom Kenan have been in a coma for a year and have no idea what happened to schools across the country as a result of teachers' union strong-arming during the pandemic. The show so thoroughly failed to "read the room" that it actually created an episode praising public school teachers who refuse to teach until they get more pay.

In the episode, 'Teacher's Strike,' on Tuesday, April 20, Atlanta public schoolteachers strike for more money. Kenan (Kenan Thompson) and his colleagues at the local television station where he works go crazy trying to juggle work and care for their kids on set, kind of like what many experienced due to COVID-related school closures in the last year. (Apparently, the coronavirus didn't hit the planet in the Kenan universe.)

Kenan brings a school board and teachers' union representative on his show to work out their differences and then gets in trouble when he incorrectly accuses the teacher of lying about pension investments made by the school board. Teachers picketing outside chant, "Teachers don't lie! Teachers don't lie!" when they see Kenan later.

Eventually, Kenan comes out to support the teachers' demands for higher pay and apologizes for ever doubting them:

Kenan: Okay, one, two, three, eyes on me. [All booing] Okay, sorry. Just a little joke. I know, I know... - Booooooo! - I never should have gone against y'all on TV. I'm sorry. I just wanted the strike to end because not having school sucks. My job is like a weekend, and your job is like my actual weekend, which is more like my week-- I don't want to go down that rabbit hole again. Look, the point is... I was selfish. But this isn't about me. This is about the kids. And, Linda, I'm sorry. You have gotten my daughters through a lot of tough times. So I am calling on all Atlanta parents to join me. 'Cause remember, the more you hate being with your kids, the more money our teachers deserve!

The idea that public school teaching on average is an underpaid profession is, of course, a persistent myth that does not square with actual data, but it benefits unions to push it.

The writers of Kenan seem somehow unaware that parents, especially in blue states and districts across the nation, have been forced into just the situation shown on Kenan for almost a year now precisely because teachers' unions have made unreasonable demands upon blue state governments where teachers' unions have enormous power. Governments politically beholden to the unions have acted like negotiators trapped in a hostage situation while children and families have suffered. Recent polling by Rasmussen found that public opinion of public teacher employee unions has declined markedly as a result.

There has probably never been a time when even left-wing parents have been more awakened to the corruption and extortionary power of teachers' unions. A Saturday Night Live alum praising teachers who refuse to work is one of the most tone-deaf moments on television this year.

This rant was brought to viewers in part by T-Mobile, Buick and Pantene. You can fight back by letting these advertisers know what you think of them sponsoring such content.