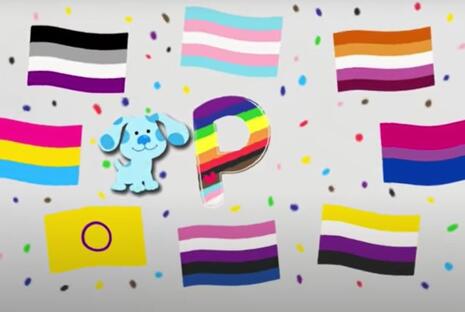 The past few years have seen a plethora of LGBTQIABCDEFG targeting of preschool, kindergarten, and elementary school audiences.

So, it is no surprise that Blue's Clues & You, Nickelodeon's reboot of the beloved children's classic, would insert sexual identitarianism into its programming.

On the show's official YouTube channel, it introduced the song ABC Song with Blue! Guess what the letter 'P' stands for? Pride, of course. A perfectly fine word on its own, but the imagery surrounding the letter leaves no doubt of the political and social messaging.

Because, of course, every parent wants their preschooler to be introduced to the symbolism of the asexual, pansexual, intersex and gender-fluid communities. Who doesn't want their toddler up-to-date on the latest in pansexual imagery?

Sammi Chan, a Nick Jr. animator, tweeted, "The first thing that came to my mind was P is for pride when I got the script. I am so excited that all of ya'll are as happy as I am! I also did all the letters and graphics for this episode to be as inclusive as possible for Black History Month! #PRIDE #BluesClues #LGBTQIA."

As Chan notes, a BIPOC (black, indigenous, people of color) gay flag is also incorporated into the song. Nickelodeon has been pushing BLM activism since last year, including with a disturbing PSA last June that left many children confused and frightened.

In the Post Millennial, writer Chad Felix Greene notes that LGBTQIA+ activists have now taken over the internet with sexual identity versions of the puppy "Blue," just as they previously did with My Little Pony. So, if parents do an internet search for Blue with their toddler on their lap, they may be surprised by what pops up.

It should be recognized by every rational adult, gay or straight, that preschool programming is not the place for sexual identity politics, or any identity politics for that matter. But the left politicizes every nook and cranny of our culture and will not leave sweet children's shows alone.

Some may call the song harmless because 3-year-olds cannot understand the larger sexual politics behind the imagery. But it is part of a bigger pattern of programming children early by inculcating them with loaded symbols so they will be good little left-wing sexual identitarians as they grow.