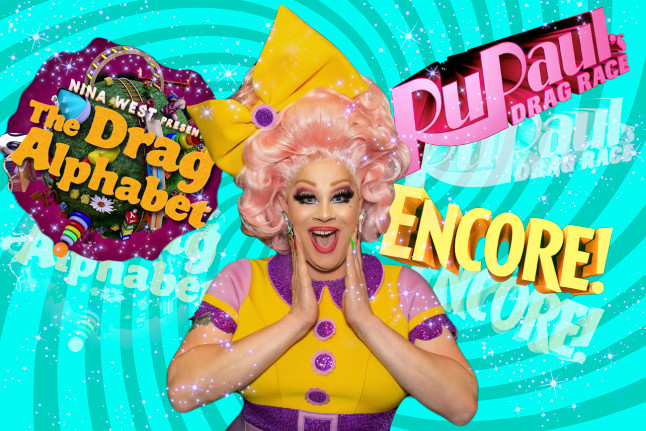 Have you ever wished your preschooler could learn the alphabet by reciting drag subculture words like "kiki" and "jush." Well, you are in luck! Now your four-year-old can recite her ABC's by imitating a drag queen.

Your kid will learn that "K is for kiki," "J is for jush," and "O is for okurr." That's a relief. I was worried preschoolers would only ever learn words like kitchen, juice and octopus. Just be sure your kid does not confuse "kiki" (a drag term for gossiping) with the similar drag term "kai kai" (a term for two queens engaging in sexual activity in drag).

Nina West, who won "Miss Congeniality" in Season 11 of RuPaul's Drag Race, and is one of Rep. Alexandria Ocasia-Cortez's favorite drag queens, has made a music video to teach children the alphabet.

"I wanted to refocus everyone to remind them that I wanted to also be in the children’s space," West told Decider. West's video includes a transgender child named "Ivy Alona."

West has done drag queen story time and insists that drag queens can provide age-appropriate content for children's spaces. This would be news to anybody who has been observing and monitoring the encroachment of drag culture into those spaces. Just recently, a video was posted to TikTok of a drag queen dancing in a sexually suggestive manner for a confused little girl while irresponsible and enabling adults looked on. Another drag queen flashed his crotch to children during a story hour event. Multiple drag queens at story hours across the United States.have been exposed as convicted sexual criminals. And, of course, the 11-year-old "drag queen" Desmond Is Amazing danced at a gay night club while adult men threw dollar bills at him.

Here at Newsbusters, we also wrote about RuPaul's Netflix show in which the queens referred to a 10-year-old child by the LGBTQ sexual term "top." Drag is not appropriate for children. It is a inherently sexualized subculture children do not need to be introduced to for any reason.

West told Decider that "representation matters." This is the new code phrase of the sexual left. ("Representation matters" was used recently to justify a throuple on HGTV's House Hunters.) Do not fall for it. Just as a stripper does not need to be represented to my children (even if the Super Bowl Halftime Show this year thought otherwise), a burlesque act like drag does not need to be represented to them either.

West said she hopes that she can eventually work with Disney. In light of Disney's own push into LGBTQ advocacy, I am sure she will eventually have her chance.