Liberal producer Chuck Lorre’s sitcom Bob Hearts Abishola might be new, but its ending certainly was not. Monday night’s pilot episode for the new CBS show about a Nigerian immigrant nurse (Abishola, played by Folake Olowofoyeku) and her white patient (Bob, played by Billy Gardell), ended with a signature Lorre vanity card that was a clear shot at President Trump and his campaign’s red MAGA hats.

The card simply showed an image of a yellow IMAG (Immigrants Make America Great) hat, the same one Lorre wore to promote his new show in August: 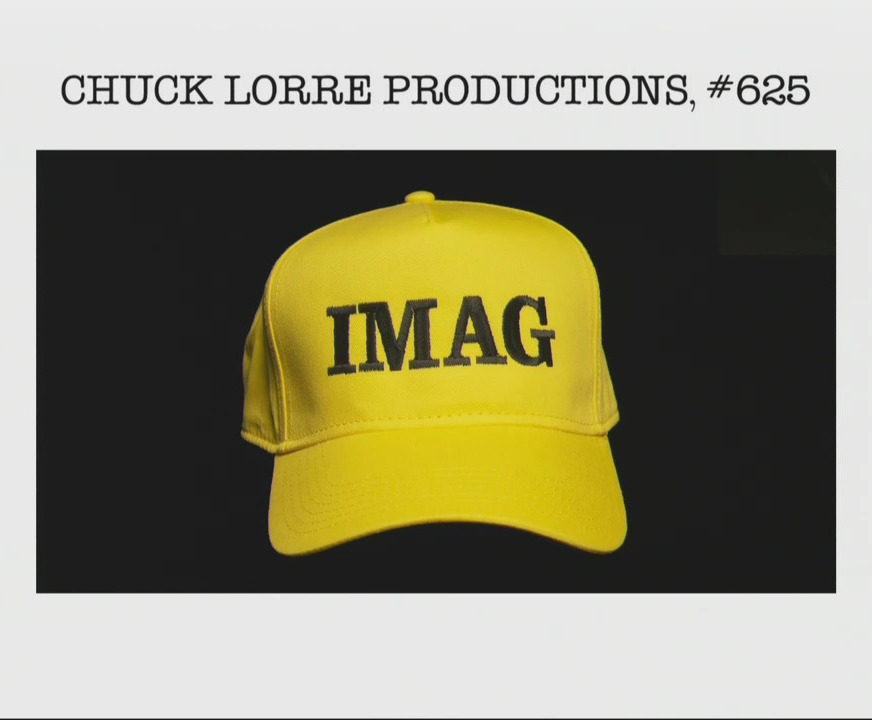 As for the show itself, unsurprisingly, Bob Hearts Abishola makes plenty of digs at the white man. When Bob knocks at Abishola’s door, Abishola’s aunt says, “There’s a white man at the door. Tell me, when has that ever been good?” Abishola’s friend says she should give the white man a chance because “a woman of your age cannot be picky.”

But for all the lame insults about the white guy, the new pilot may be the first show in recent memory to acknowledge that bigotry is often more complex than the simplistic “white persecutor versus oppressed minority” dichotomy. In one scene at the local school, Abishola gets in a fight with a non-immigrant black parent when the school principal reveals that the American-born son called Abishola’s son a racial slur. In response, Abishola insults the other mother’s boy, implying that the native-born black son will grow-up to be a failure. The intensity of that scene is the first I have seen in a sitcom. Usually, bigotry is only portrayed between black and white characters.

Abishola: I don't understand. My son does not make fights.

Teacher: Well, apparently some unfortunate words were said to him, and he lost his temper.

Mom 2: I don't care who said what. Her son assaulted my son.

Abishola: Yes, I got that part. Now, what was the unfortunate word your son said to my son?

Abishola: So, your son, who I assume is the same color as you, uses a racist word for my son. How is this possible?

Mom 2: Still no excuse for him throwing a chair at my Calvin.

Abishola: Hey, call me a jungle bitch and see how fast I throw a chair at you.

Teacher: Okay, okay, let's-let's all just take a deep breath and figure out how we can resolve this.

Abishola: Oh, I'm breathing fine. I'm breathing just fine. How about this? You teach your son to speak with respect towards my son, who is a straight a student. And there'll be no more fighting.

Mom 2: That's not good enough. Her kid should be suspended.

Abishola: Ah. And what grades does her Calvin get?

Abishola: Well, one of these two boys is going to be a doctor, and I'll give you a clue. It is not your Calvin.

As that scene also shows, the pilot is just not funny. There are almost no good laugh lines and the characters generally come across as one-dimensional stereotypes, awkwardly pausing for canned laughter. The attempts at “edgy” jokes just come across more often as mean-spirited pot shots (such as when a nurse says of a cold doctor, “They say he’s on the spectrum, but I think he’s just a dick.”)

Bob’s sister is a bleeding-heart liberal and her jokes are along these lines, too. She says, “Maybe now you'll stop eating defenseless animals,” when he’s having a heart attack in the opening scene, and “Maybe it's time we stop exploiting these people,” when there’s a dispute with the Malaysian manufacturer that produces the family company’s socks. Never mind that one of Donald Trump's signature campaign themes was stopping companies from outsourcing jobs to cheaper workers overseas. Strangely, Lorre does not see the incoherence in his own script.

Chuck Lorre may have become so focused on pushing his politics that he can no longer write for laughs. Viewers will not "heart" this turkey.