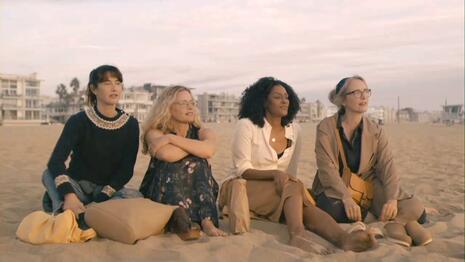 Liberal themes were frequent in HBO Max’s new dramedy series On the Verge about four middle-aged female friends and their families that was released on September 7. Their tween children all attend the same school, which is apparently a public one where they're learning the liberal agenda. In fact, there was plenty of liberal lecturing for viewers throughout the 12-episode series, from sexuality and gender to Donald Trump.

In one episode, Anne (Elizabeth Shue) discovers that her au pair Gretchen (Jennifer E. Gardner) is unexpectedly pregnant. Gretchen tells Anne that another au pair she knows is always depressed since having an abortion, making it seem as if she may be reluctant to have one herself.

Towards the end, Gretchen seems to be getting used to the idea of having a child and even remarks about the development of her baby, leading Anne to remark about the “miracle of life.” Anne seems to immediately regret her words, however, and quickly corrects herself, devaluing the life and worth of Gretchen’s unborn child to her face:

Anne: Knock knock. I brought you some food.

Anne: I’ll just leave it here and you can have it later. How are you feeling?

Anne: Yeah, have some. It’ll give you energy. You know, when I was, uhm, pregnant with Seb, the only thing I could tolerate were berries.

Gretchen: The website says that my baby is now the size of a blueberry.

Anne: Aww. The miracle of life. Well, you know, it’s not really a baby. It’s just a cluster of cells, so…

Anne has an effeminate son, Sebastian (Sutton Waldman), who's being recruited for the talent agency of one of the friends for his androgynous look, which is “very current right now” as “all the kids are doing it.” Anne supports her son's feminine traits while her husband George (Troy Garity) is slightly less keen on them. When Sebastian shows up in a leotard and tights for soccer practice, George protests and an argument ensues:

Anne: Oh, honey, you don’t have gymnastics today, you have soccer.

Sebastian: But mom, this is my version of athleticwear. At school they always tell us to live in our truth.

George: Sebastian, cut it out. Cut it out. You need to put on your uniform. Come on.

Anne: It is no big deal.

Sebastian: I can put the jersey over it.

Gretchen: Let me handle this, Anne.

Sebastian: The shorts are uncomfortable. I can wear the jersey over it! Dad, please!

Anne: Relax. It’s okay. He’s an individual. He believes in himself and he has to feel good about himself. That’s his identity and we have to stay out of it.

Anne: You really have to let it go.

Gretchen: We made a compromise.

Anne: I love your hair.

Sebastian becomes more feminine with each passing episode. One reviewer of the show referred to him as “Anne’s daughter,” and even I mistook him for a girl in one scene even though I’d already been introduced to his character.

By the final episode, Sebastian asks Anne if he’s “gay for sure,” (even though there was never any mention of him being gay during the whole series). Anne avoids the question by telling him he’s perfect, which is a loving response. But she could have added that it’s normal to have confusing feelings, emotions and attractions at his age and that it’s too soon for him to know how he will feel for the rest of his life.

Trump may have left office more than nine months ago, but Hollywood isn’t over hating on him. We're treated to a Trump jab as Anne’s business manager advises her to expand and expense as much as she wants, “And thank Trump.” Seeing the disdain for Trump on her face, he adds, “Oh no. See, I know your crowd. You like to hate on the guy, but what he has done for our economy.” Of course, being pro-Trump, he ends up being a bit of a misogynist as well as a bad business manager.

Justine (Julie Delpy) is the French character in the group. When she asks her French father when he’s going to come to America to visit, he says it’s too depressing to come here with “that guy” in power and mentions that everyone is talking about narcissists now (implying it’s because of Trump). Her husband Martin (Mathieu Demy) is upset that she believes Paris is too depressing to live there. “Isn’t it depressing here, too,” he asks, “with the psycho we have for a president?”

Another Trump insult comes when Justine gets angry at Anne for not picking up her phone during an emergency and insults her tongue in cheek, saying, “You know what you are? A pervert narcissist… Like Trump.”

As for what the kids are learning, Justine's husband remarks that their son Albert (Christopher Convery) is learning everything about transgender rights in his school but doesn’t know his multiplication tables. Albert worries one night about being white because "White people were slave traders, Mom." Rather than ease his conscience by informing him that Native American and black people were slave traders and owners as well, that many white people disagreed with slavery and fought to end it, and most importantly, that white people living today had nothing to do with any of it, she instead tells him their ancestors were French, although France was colonial:

Justine: Are you upset I’ll be leaving, love? You’ve been looking sad since yesterday. What is it?

Justine: You don’t want to stay alone with Daddy?

Albert: No. It’s just… Mommy, are we completely white?

Justine: What do you mean?

Albert: Do we have anything else other than white ancestors?

Albert: And we’re the terrible white people who did those things, Mom. Our ancestors. They would separate families, sell children, whip them.

Justine: Listen Albert, our ancestors were growing cabbage near Saint-Malo in Brittany, and on your dad’s side in Auvergne, mostly sheep farmers. We don’t have ancestors who were slave traders.

Justine: I mean, France was more colonial, which is not great, but…

Albert: What about my friends at school? Are they descendants of slave traders?

Justine: Well, I can’t speak for their ancestors, but for us, strictly cabbage and cheese.

In another episode, the four women go for a hike with four of their sons. The boys run ahead and discuss marital problems their parents are having, which turns into a very fatalistic take on global warming:

Sebastian: They’ve ruined everything for us. I hate them.

Albert: I guess we all need to die, so the planet can recover.

This show could definitely serve as a lesson for why not to send your kids to public school. Added with all of the liberal lecturing, I say this show needs to die so viewers can recover.