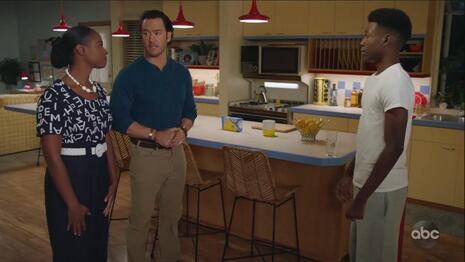 While the highly racial sitcom franchise black-ish, grown-ish and mixed-ish love to portray white people as clueless, annoying, racist, tone deaf and any other number of negative traits, it looks as if the writers of mixed-ish may have been so blinded by their love of hating on white people that they didn’t even realize they made a perfect argument against affirmative action.

On a show that features a mixed-race family, you’d think the jabs at white people would be less frequent, but you would be wrong. This is leftist Hollywood, after all. The show is about the life of black-ish’s main character Rainbow "Bow" Johnson (Tracee Ellis Ross) as she’s growing up in the '80s (Arica Himmel plays the young Bow) as the mixed-race child of white father, Paul (Mark-Paul Gosselaar), and black mother, Alicia (Tika Sumpter).

In Tuesday’s episode, “On My Own,” Paul brings a black student, Jay, home from MLK High School where Paul teaches and is eager to help him apply for colleges, dress for success, and more. Even though Paul and his lawyer wife are competing to see who can sway him the most as to which career path to take, Paul gets chastised for his part in helping Jay, because there’s apparently a “right way to help and a whiteway to help:”

Paul: I just really want him to do well. You know?

George: Mm-hmm. Yeah, I-I do know. I got a question for you. Is Jay Black?

George: It is not.

George: Ohh, so you're trying to save a brother.

George: Hey, look, I'm sure you are, but let me ask you something. Would you be as enthusiastic about helping this kid if he was White?

Paul: Are you saying that I'm only helping Jay because he's Black? I -- That's ridiculous.

Paul: If there's anything you borrowed from Vivica, get it back, because we're not talking to George again! Can you believe he said I'm only helping Jay because he's Black?

Alicia: I can believe it, yes. It's not your fault. It's just White instinct to go out and help Black people that don't need it.

Paul: How is it a bad thing that I'm doing everything I can to help Jay succeed?

Alicia: I mean, it might rob him of feeling ownership of all of his future accomplishments just because you want to feel good about yourself in this moment, but it's not a huge deal.

Paul: Wait. What are you saying?

Denise: All she's saying is there's a right way to help and a Whiteway to help.

Paul: That's insightful. What does that mean, exactly?

Denise: Honestly, I came up with the rhyme first, so I don't quite have a point yet.

Alicia: Her point is, White people love helping Black people so they can get credit, sort of like what you're doing with Jay.

Criticizing white people for wanting to help black people seems to be a theme in Hollywood right now. At least on the “ish” franchise.

Later, when Alicia and Paul have a heart to heart talk about the situation, Alicia admits she felt triggered because she hates that part of her success was in part thanks to help from Paul’s father and that getting a leg up can make someone feel less deserving of their success:

Alicia: Hey. You okay? What are you doing?

Paul: Oh, you know, just thinking about how I'm unconsciously oppressing my student by giving him help.

Alicia: I didn't say all that. I just called you gross.

Paul: You might as well have. You know, because of our relationship, I get to see firsthand how unfair the world can be for Black people, and I'm just desperate to help change that.

Alicia: Babe, I know your heart's in the right place.

Paul: But this week, I let it become all about me. You know, the reason I became a teacher at MLK was to help kids like Jay. But it just feels like, because I'm White, maybe I'm doing something else.

Alicia: Okay, so you overstepped. That doesn't mean you should quit helping altogether. It's just, when White people are helping Black people, they need to realize what it feels like to be on the receiving end of that help.

Paul: Right. Okay. I-I-I totally get what you're saying but assume for a second that I don’t and keep talking.

Alicia: It can make someone feel less-than, which may be why I lashed out at you. I've worked my whole life to be seen for my talent and abilities. And I kind of hate that part of my story is the fact that your dad gave me a huge leg up.

Paul: Oh, but, babe, nobody gets there completely on their own. Jack's dad is my dad's golfing buddy, and -- and the only law school that Bradley's ever gotten into is the one that his family founded. Do you think for a second that they doubt that they belong? No, even when they should. No. And regardless how you got there, your track record speaks for itself.

Wouldn’t the same apply to those helped by affirmative action? It can make someone feel "less-than." Rob them of feeling ownership for all future accomplishments and make them feel they must work harder to be seen for their talent and abilities.

Conservatives have been saying this all along. That people should be helped or not helped, hired or not hired, accepted into college or not accepted, etc., based on their talents and abilities, not on the color of their skin.

There are people flocking to America from all different countries and cultures to seek the type of opportunities they know can be found here - for everyone, no matter their color. People who risk their lives to escape truly oppressive systems and come to America because they know what real oppression looks like, and it’s not found in this great country.

For one, brief moment, it seems the writers of mixed-ish realized this, even if on a subconscious level, but I won’t hold my breath for that lesson to stick or show up in future episodes.

Conservatives Fight Back! This episode of mixed-ish was sponsored by Target and Charmin. Click each advertiser for their contact information so that you can let them know how you feel about this episode!