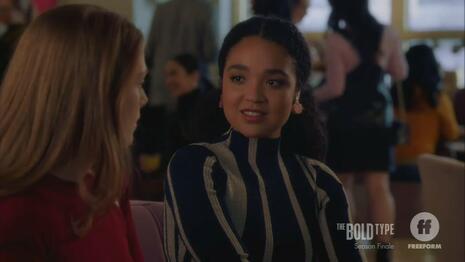 Leave it to one of the most liberal shows on television to cave to an actress who didn’t want her progressive character to play nice with a conservative character who she claims is “complicit in the oppression of so many,” and whose "politics are actively harmful.”

On Freeform’s The Bold Type, polyamorous Kat (played by liberal actress Aisha Dee) and politically conservative character Ava (Alex Paxton-Beesley) have had a long-running history of tension between them, culminating in Kat's shock that Ava is a lesbian.

That was enough to redeem Ava in Kat’s eyes as the two began falling for each other, but for Dee, Ava being a lesbian didn’t make her any less evil in her eyes because she’s still a “privileged conservative” (never mind that her character Kat admitted to being privileged herself in a previous episode.) This was an offense so great that Dee went public on Instagram last Wednesday with her complaints, writing:

“The decision to have Kat enter into a relationship with a privileged conservative woman felt confusing and out of character. Despite my personal feelings about the choice, I tried my best to tell the story with honesty, even though the Kat I know and love would never make these choices. It was heartbreaking to watch Kat’s story turn into a redemption story for someone else, someone who is complicit in the oppression of so many. Someone [whose] politics are actively harmful to her communities.”

According to Vulture, a statement was released by Freeform, Universal TV, and The Bold Type’s producer “applauding Dee,” that read, “Our goal on The Bold Type is and has always been to tell entertaining, authentic stories that are representative of the world that Kat, Jane, and Sutton live in — we can only do that if we listen.” I’m fairly certain conservatives live in Kat, Jane and Sutton’s world. A truly authentic story would reflect that and not vilify or stereotype conservative characters. The moment any human being is treated as less than and a bad person just because they’re not a Democrat, that’s when true danger begins. That type of thinking is a threat to all of humanity.

As if Dee’s attacks on conservatives weren’t insulting enough, her complaints led to this opinion piece in Teen Vogue, which made Dee’s prejudice look like child’s play. (But this piece in Remediality was so filled with hateful stereotypes and prejudice towards conservatives, I’m not going to do anything more than link to it for your reading displeasure.) According to the Teen Vogue author, The Bold Type apparently endangered “queer black people for entertainment,” and “bargained the safety of its one, queer, Black, female, main character for the sake of misguided, harmful discourse.”

Instead of continuing to reveal who Ava really is and painting her in a better light as Kat got to know her more, the writers caved to the backlash and changed the ending of Thursday’s episode, “Not Far from the Tree,” at the very last minute, proving that social justice warriors actually wield a lot of power and aren’t as “oppressed” or victimized as they claim to be:

According to Vulture, the original ending had Ava and Kat texting each other about their relationship being complicated for them both, but there was no breakup. So, we likely would have seen more of Ava in season 5. Now, it’s uncertain if she will be brought back.

“It’s disappointing but not surprising that left-wing writers would perpetuate the myth of social division around political ideology. There are countless numbers of politically discordant relationships (gay and straight) in America that work out just fine. “The Bold Type” does a disservice to the real understanding and growing acceptance amongst LGBTQ equality when love falls victim to a social justice-laden victim narrative.”

This entire controversy reflects a typical, myopic view from the Hollywood left, clouded by hate, intolerance and prejudice, the very things they claim to be against. There’s nothing “bold” about that. In fact, they chose to take the cowardly way out.

If you would like to raise a protest yourself, here are the advertiser's from the season finale episode: