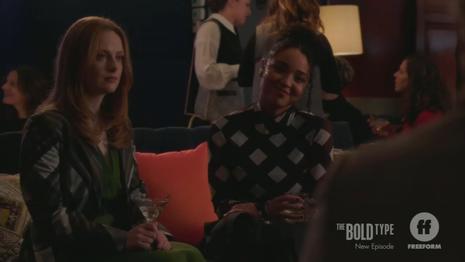 Sign of the times? Leave it to Freeform’s extremely liberal teen drama The Bold Type to push an anti-capitalist, “fight the patriarchal system” storyline on television as we watch violent, leftist mobs fighting to destroy America by calling for anarchy, lawlessness, and socialism in the real world. And, once again, the agenda-laden storyline is being delivered via Kat (Aisha Dee), who, as a black, heterosexual turned lesbian turned bisexual turned polyamorous feminist, is supposed to be the show’s most woke, oppressed, and intersectional character.

Kat’s nemesis of late has been Ava (Alex Paxton-Beesley), a staunch conservative who has carried a grudge against Kat for having her father fired from the board at Scarlet magazine where Kat used to work (until she was also fired for theft, but the theft was for a good liberal cause, so of course it was worth it to Kat). When Kat starts working as a bartender for a women’s club called The Belle, she discovers that Ava is a member, much to her chagrin.

But on Thursday’s episode, “The Truth Will Set You Free,” Kat decides to invite Ava to be a guest on her podcast after finding out that her friends were mesmerized while watching Ava "defending hardline immigration" on ABC News, despite seeing her as a “heartless monster” for her beliefs. Kat knows that debating Ava on her podcast will likely result in more listeners and will also convince her boss to let her do the podcast at the club.

At first Ava declines, telling Kat she doesn’t believe she’d be able to interview a Republican fairly, but after Kat woos her, she relents. It’s during the podcast that Kat tries to convince Ava that as women, they are both oppressed by “the system,” which is “capitalism and patriarchy:”

Kat: Okay, so when the issue of identity politics comes up in your circles, how do you combat the stigma that the conservative party is overall homophobic?

Ava: I don't combat it at all because it’s none of my business. I don't think that it should be brought up nor should that fire be fanned because sexuality whether homo, hetero, pan, a, or other, it doesn't define a person.

Kat: Okay, sure, it doesn't define a person, but it certainly adds to why they might be put into the category of other, and therefore oppressed under the system we're all in.

Ava: The system being...

Kat: Okay, I see you laughing, and I mean, you can go ahead and laugh if you want, but you are also a victim of the system. You're a woman living in the world, and you can't be immune to the effects of that.

Ahh, yes. “The system.” The system that’s so evil that people all over the world come to America for a chance at a better life and freedom. The system that allows everyone the chance to make their dreams a reality with hard work and determination. The system that the left proudly wants to destroy, both on television and in the real world.

Here’s a list of advertisers on The Bold Type that you can contact to let them know how you feel about this blatant attack on America and all it stands for: