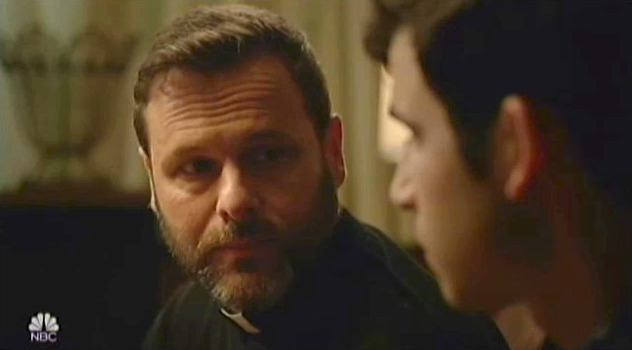 We may only be two episodes into NBC’s new drama Rise, but we’ve had enough liberal messages thrown at us to last two seasons. Tuesday’s episode, “Most of All to Dream,” featured a Catholic student who appears to be secretly gay, an effeminate priest who supports said student and his desire to take part in a controversial school play over the objections of his parents because he “can appreciate its message of the perils of living in a repressed society,” and a female student who just started transitioning wanting to change in the boys’ dressing room.

Last week, after telling Mr. Mazzu that he wasn’t comfortable playing a gay role and having to kiss fellow student Jeremy (Sean Grandillo) in the play, Simon (Ted Sutherland) ended up defiantly standing up to his Catholic parents in defense of his role and the play overall by the episode’s end. This week we see Simon and his parents discussing the issue with their priest. But because this is the Hollywood left, the priest displays some stereotypical gay mannerisms and has the very unlikely response of siding with Simon and even the controversial play.

Robert: I’ll make this simple. We don’t think this material is appropriate.

Mother: Stanton Drama has always been about families. Young children attend these performances. Please, Father. We know he listens to you.

Priest: Well, Simon and I have always talked about ways that he can give back to his community in his works.

Robert: This is not his works, Father, this is trash.

Robert: If this Lou Mazzuchelli wants to direct some kind of radical theater, let him go to New York City. This is Stanton Drama. These are our kids onstage acting this stuff out. Have you read this?

Priest: I have, yes, and I appreciate its message of the perils of living in a repressed society. But it is quite provocative. I suppose it comes down to trust. Do you trust this director?

As for Simon, it’s obvious he’s trying to deny his attraction to Jeremy, giving the whole “repressed society” message an added boost. Which begs the question, were the writers trying to insert a subliminal message that the priest himself is repressed and that’s why he appreciates the play’s message? Given the fact that Mr. Mazzu comes out as gay to his wife in the book that the show is based on (Michael Sokolove’s “Drama High”), it appears repressed homosexuality is going to be a main theme on Rise.

When Simon and Jeremy rehearse their kiss, Simon is visibly uncomfortable, and as they lock eyes, it becomes apparent that it’s not for the reasons Simon expressed in the previous episode - because it goes against his faith - but because he is finding himself attracted to Jeremy.

Simon: ♪ Come cream away the bliss ♪ Travel the world within my lips ♪ Fondle the pearl of your distant dreams ♪ Haven't you heard the word ♪ Of your body? ♪

Mr. Mazzu: And lighting cue, and Simon, turn and... Okay, try it again. You gotta turn into him, okay? Hug into him. Remember, this whole scene is a dance. And this is the climax, okay? All right. Great, okay, then you'll kiss, and then after you kiss, the lighting cue, and then you'll both exit. Okay. Terrific. Great work. That's gonna be terrific.

During another rehearsal, Jeremy catches Simon staring at him, which leaves Simon again awkward and visibly uncomfortable, and he immediately asks the girl next to him to go on a date with him to deflect. By the end of the show, however, Simon’s parents announce that they’ve enrolled him in the local Catholic school which, judging from the look on Simon’s face, he thinks it’s the worst thing that could ever happen to him.

Then there’s the Margaret/Michael storyline. New theater member Margaret announced in last week’s episode that she would prefer to be called Michael, as she’s newly transitioning to become a boy. This week, she approaches Mr. Mazzu to tell him she’s been changing in the utility closet. “And this is the theater, you know the troupe and all,” she says. “I feel weird having a separate space.”

When Mr. Mazzu asks where she thinks she should change, she answers, “I guess the boy's dressing room.” Mr. Mazzu offers to “talk to the guys” about it, but she says she doesn’t want it to “become a thing,” so he asks her to come to him if she needs any help and she agrees.

Later, she enters the boys’ dressing room and, even though her female parts are still intact, everyone appears welcoming, except for Simon, who is still sporting the same confused look he’s carried throughout the show so far.

Margaret/Michael: Um...everyone. I'm gonna be changing in here with you from now on, if that's okay.

What if it were a male student, with male body parts still intact, wanting to change in front of female students? I have a feeling that scenario wouldn’t be met with heartwarming smiles. And what if there’s a male student in the depicted situation who is afraid to speak up and say that it makes him uncomfortable? Don’t his feelings matter?

I’m trying to repress my rising feelings of frustration with this show, but I’m not having much success at it.