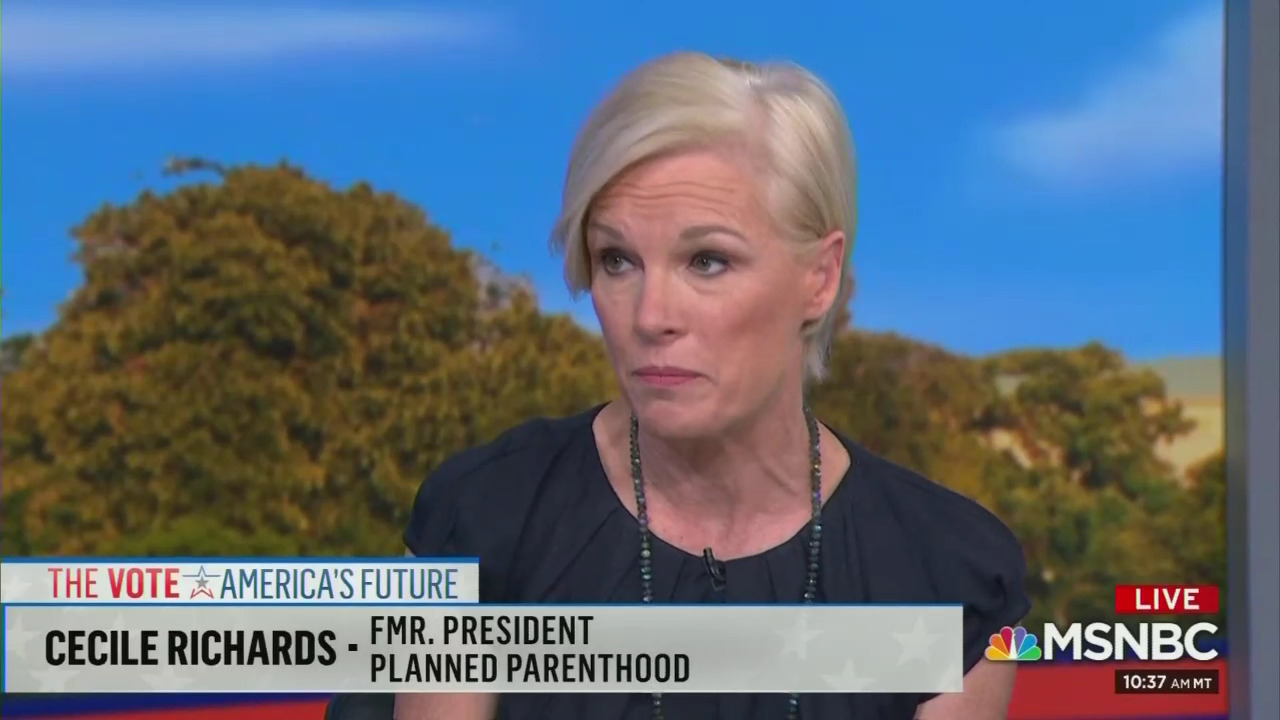 Right out of the gate, Burleigh stumbles over pesky facts in her April 9 interview, referencing “the viral controversy over fake videos that alleged her group profited from fetal remains.” Actually, a federal court ruled they were authentic. Add Newsweek to the list of publications needing to run retractions on that.

When asked about abortion as a “mobilizing” issue for the GOP, Richards says that “misogyny is an organizing force” for Republicans and that “publicizing extreme positions on social issues has become the way to succeed.” Feigning to have a pulse on the Republican Party, the former leader of an organization that gives tens of millions of dollars to Democrats claimed “[t]his is not shared among Republicans in general,” who are held “captive to a loud minority of people.” She bizarrely thinks, “This is why we see people fleeing the GOP.”

Richards laments that the Trump Administration has been “worse” than she thought, “which erases whatever credit Ivanka might get for behind-the-scenes conversations about child care.” I’d say killing unborn children erases whatever standing Richards might have to talk about child care! After overseeing millions of abortions during her tenure, she then has the audacity to say, “How can you talk about child care policies and take away children from mothers at borders? You can’t have it both ways.” Further demonstrating her lack of self-awareness, when Richards talks about the mythical wage gap, she says, “Workplaces treat pregnancy as a burden and nuisance.” Ahem, maybe at HER former workplace!

Richards also complains about Trump “jamming through appointments” and “reshaping” the judicial system into a “much less friendly place for women.” Burleigh says Trump has “actually been kind of good for the women’s movement,” having inspired activism, but bemoans “all those American women who are perfectly fine with Trump and the way things are going, including the women who you write abandoned Christine Blasey Ford.” Curse those dastardly women who see the economy and country going on the right track and saw through the baseless allegations against Justice Brett Kavanaugh!

In a twist, Burleigh asks Richards if she agrees with Justice Ruth Bader Ginsburg, “who has suggested that perhaps Roe v. Wade was a flawed decision” that should have been battled out in the states. Surprisingly, Richards doesn’t even attempt to defend Roe, bending the knee to Ginsburg and seemingly conceding that it’s bad case law.

Who among us could ever disagree with RBG on anything? But you can never rely on only the legal rights through the Constitution to protect you. You have to fight continually for the values it represents. That is as true of civil rights and voting as it is of abortion rights. Believing that a Supreme Court decision in and of itself lays the question to rest is just a falsehood. We could never simply rely on our legal status as a way of having true equality. Having a legal right means nothing if you can’t access care.

Hopefully someday we will see “true equality” – not by killing our children in the womb but by protecting their right to life.