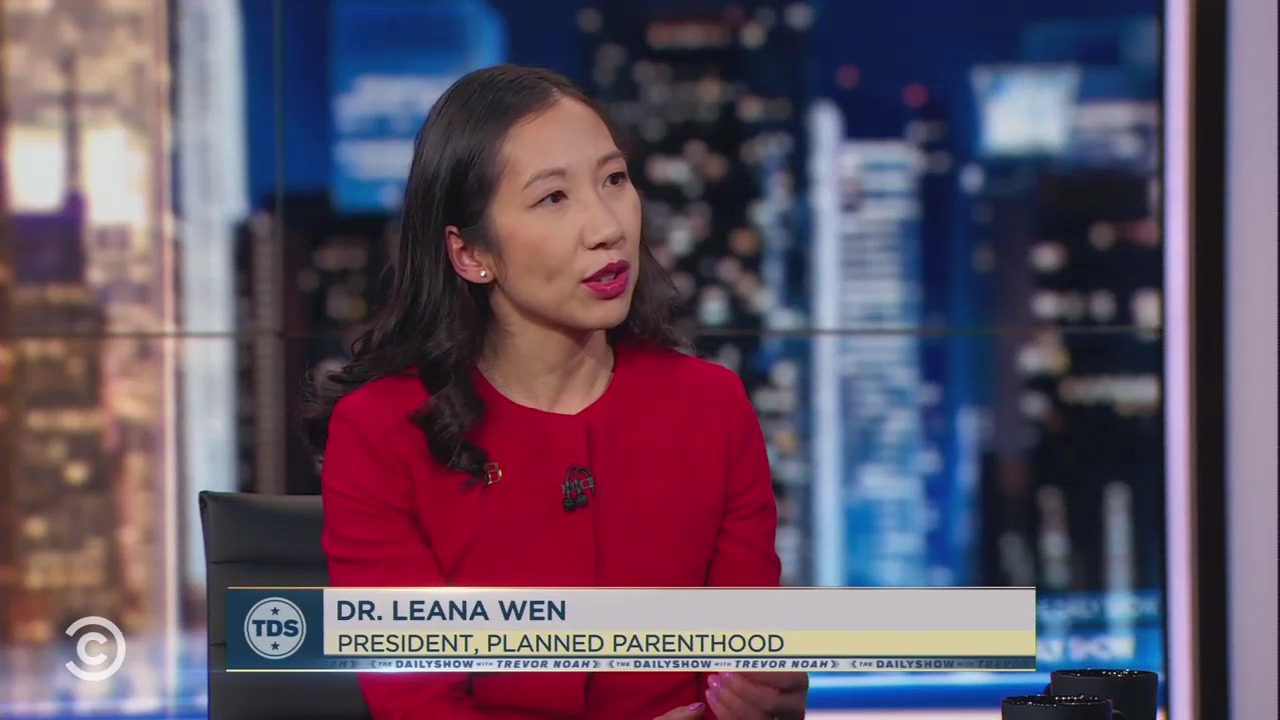 Dr. Leana Wen got a hero’s welcome on The Daily Show With Trevor Noah on March 21. Noah gushed that Wen, who has now been the president of Planned Parenthood for 4 months, has “one of the most impressive resumes of any human being I have ever read” and has “been a bad ass from day one.”

“Planned Parenthood is a healthcare organization,” said Wen, going over her talking points. “We're not the ones that made healthcare political. Getting medications for your children, getting breast and cervical cancer screenings, STI tests, these are not political issues. But when other people have made healthcare political, it is our duty to fight back with everything we have because it's about people's lives.”

Abortion is not healthcare and obviously the legitimate medical issues Wen cited are not political and not the reason the abortion giant is so divisive. If Planned Parenthood truly cared about children’s medications (what medications is Planned Parenthood providing kids with besides birth control, by the way?), cancer screenings (which have declined, along with other services) and STD testing, they would have taken President Trump up on his offer to federally fund the organization if they stopped committing abortions.

Wen talked about a medical mentor who claimed in the ‘60s the hospital’s sepsis ward “was filled with young women who were dying from infections and kidney failure because they had to go have unsafe abortion care, and that's what could happen now.” As if Roe v. Wade magically makes abortions safe, medical advances and antibiotics has nothing to do with the decrease in complications in the last century.

The comedian then brought up the issue of late-term and post-birth abortion, giving Wen the opportunity to get up on her high horse and say, “Shame on you, President Trump,” for “lying” and “exploiting [women’s] pain for political gain.”

Trevor: When you look at the arguments Republicans pose from the other side, they say we are here to protect the unborn child. President Trump has been seen on the campaign trail saying this is about late-term abortions. You know, you hear the stories now where -- I mean, President Trump actually said it's gotten to the point where a baby can be aborted after it is born. Now -- ( laughter ) I don't know what that means, but you are a doctor. What do they mean by late-term abortions, like, after birth or at birth?

Wen: Good response from the audience. ( Laughter ) We have to call out President Trump for what he is doing which is lying. I mean, what he is saying has no basis. ( Cheers and applause ) What President Trump is saying has no basis in medicine or reality. ( Laughter ) And here are the facts -- about 99% of abortions occur before 21 weeks, and those that occur later in pregnancy are because something in the pregnancy has gone very wrong. These are extremely difficult, hugely personal and challenging circumstances that women and families find themselves in.

Wen: And they deserve our compassion. And President Trump is exploiting their pain for political gain, and I say to him, shame on you, President Trump. ( Cheers and applause )

Trevor: I tell you this much, you are a doctor who is a woman who is running Planned Parenthood who finished college and is an immigrant. You are literally Trump's nightmare. ( Laughter ) So good luck on your journey. Welcome to your new job. ( Cheers and applause ) Dr. Leana Wen, everybody. We'll be right back ( cheers and applause )

As we all know, it was Virginia Democrat Gov. Ralph Northam’s own description of a late-term or post-birth abortion that really got the debate started, but Noah made it seem as if President Trump randomly made up such a crazy idea. This drew laughter from the adoring liberal audience, which Wen appreciated and pointed out to distract from the truth: that we have evidence of babies being killed after birth by abortionists like Dr. Kermit Gosnell and Dr. Douglas Karpen. Noah, Wen, and the audience all acted as if late-term abortions and infanticide are a hilarious joke instead of a grim reality.

Wen wanted her captive audience to think that all late-term abortions are done “because something in the pregnancy has gone very wrong,” implying only because of fetal abnormalities or risk to the mother’s life, but we know that’s just not true. And let’s not forget that 1 percent of almost a million abortions is still a large number – that means several thousand abortions take place after 21 weeks. It’s so extreme that the U.S. is one of only seven countries in the world that allow elective abortions after 20 weeks.

But something tells me that an audience that thinks late-term abortion is an applause or punch line doesn't really care.