Answers: It isn’t only three percent and money is fungible. 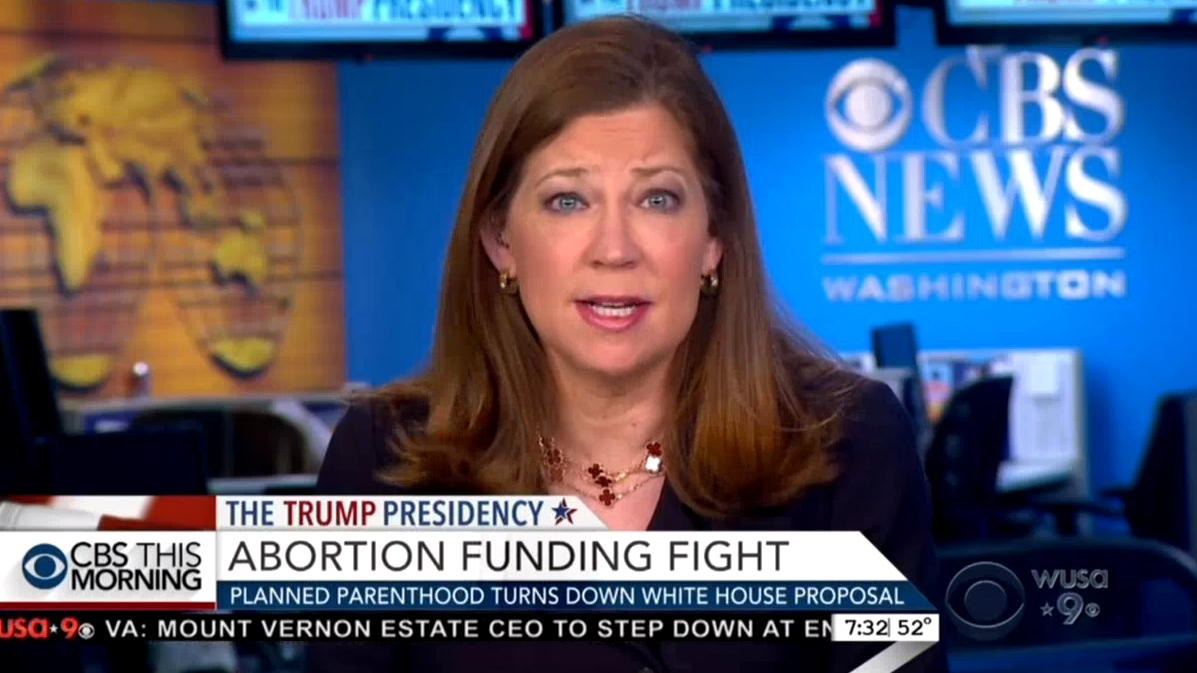 On Monday, The New York Times announced “Trump Tells Planned Parenthood Its Funding Can Stay if Abortion Goes.” That story went viral as ABC, CBS and NBC mentioned the latest development during their news shows Tuesday morning. But while all three broadcast networks spun the news negatively, CBS provided the most embarrassing coverage by regurgitating the talking points and statistics of America’s largest abortion provider.

For the New York Times, correspondent Maggie Haberman wrote that the White House “proposed preserving federal payments” to Planned Parenthood if it stopped abortions. However, she added, “The proposal, which was never made formally, has been rejected" by Planned Parenthood officials.

While the Hyde Amendment, a legislative provision approved annually by Congress, bars federal funding (aka taxpayer funding) for abortion except in cases of rape, incest or to save the life of the mother, pro-life leaders argue that the government money is fungible.

But the networks won’t tell viewers that.

Unlike the other networks, CBS dedicated a full report to the Planned Parenthood news for This Morning. Co-anchor Norah O’Donnell introduced correspondent Jan Crawford to detail the “politics behind the funding battle.”

“In its media campaigns, Planned Parenthood emphasizes it provides general care and testing for women’s health,” she began, “And it says only about three percent of its work is abortion services.”

But pro-life groups, such as Students for Life of America and Live Action, have long debunked that statistic. Even the liberal Washington Post admitted the number was deceptive.

Although she read a statement from President Donald Trump, Crawford did not interview any pro-life leaders on the news. But she did take the time to question Planned Parenthood Executive Vice President Dawn Laguens who “says the proposal holds women’s health care hostage” and Sen. Kirsten Gillibrand (D-NY) on federal money prohibited from abortion.

Crawford herself stressed that government money couldn't go towards abortion.

“Planned Parenthood mainly provides health services, including cancer screenings, sexually-transmitted disease testing and access to birth control,” she said. “The nonprofit organization reports that none of the roughly 500 million dollars of federal funding it receives goes towards abortion.”

She failed to address the argument that money is fungible, or that Planned Parenthood could offset costs with public funds to free up other resources for abortion. Another point highlighted by pro-life groups.

In the end, Crawford doubted Planned Parenthood would lose funding.

“We may be seeing this change in the president's position because some Senate Republicans opposed defunding Planned Parenthood and President Trump’s daughter Ivanka long has championed women’s health,” she said. “So the president's campaign suggestion, you know, that – to stop the federal funding, well, that's also unpopular among voters” (according to a January Quinnipiac poll).

But maybe it wouldn’t be “unpopular among voters” to continue funding Planned Parenthood on the condition that it stopped performing millions of abortions. There isn’t a poll for that.

“The White House has proposed preserving federal funding for the group,” she said, “but only if they stop providing abortions.”

Following Bruce, ABC co-anchor George Stephanopoulos outlined the “three distinct threats that Mary pointed out there” on the replacement.

He listed them as “the cutting of Planned Parenthood funding,” Medicaid limitations and the similarities of the replacement with Obamacare. “Which one do you think is the most serious right now?” he asked Chief White House Correspondent Jonathan Karl.

“What’s next?” she Jackson asked. “The work to win over skeptical Republicans, like moderates, who may balk at a provision stripping federal funds from Planned Parenthood. In the Senate, not much margin of error. A few GOP defections could mean trouble.”