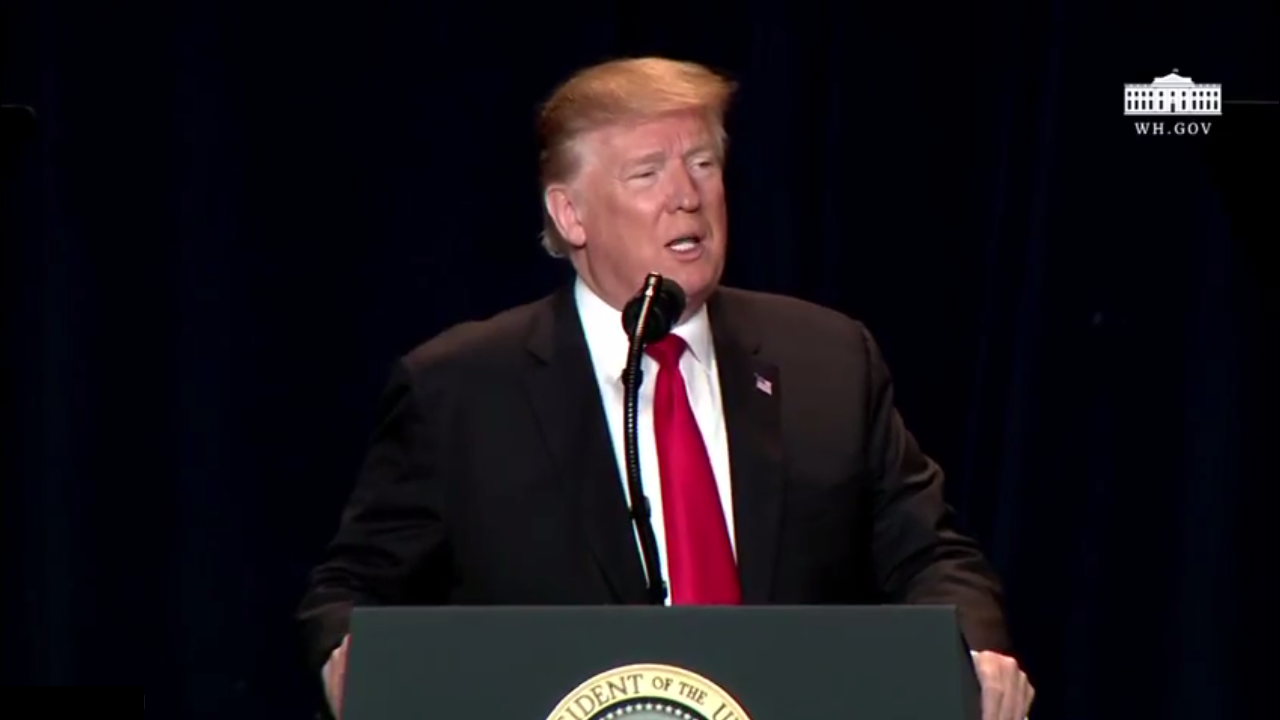 President Trump spoke about important topics to our country like abortion, adoption and religious liberty at the National Prayer Breakfast, but his critics instead focused on a word slipup to bash and mock him on Thursday.

Delivering his speech, President Trump said, “Since the founding of our nation, many of our greatest strides—from gaining our independence to abolition of civil rights to extending the vote for women—have been led by people of faith.”

The White House transcript indicates that the president should have said “to” instead of “of,” in an unfortunate mistake.

Even the Dictionary.com Twitter account piled on and a Newsweek article by Daniel Moritz-Rabson gushed about how the account “mocked” President Trump. Kyle Griffin, a producer for MSNBC's The Last Word with Lawrence O'Donnell, posted video of Trump’s stumble, which Dictionary.com’s account retweeted with the definition of the word “abolition.”

Moritz-Rabson also highlighted liberal commentator Holly Figueroa O'Reilly’s tweet saying, “Trump finally said something honest at the National Prayer Breakfast. When you've got kids in cages and refuse asylum seekers who are already in the country, ‘abolition of civil rights’ pretty much covers it.”

The Newsweek article also had to helpfully point out about Karen Pence that she "has recently drawn criticism for teaching at an evangelical school with anti-LGBTQ policies.”

Mediaite, too, gleefully reported, “The Dictionary Trolls Trump For Saying People of Faith Helped ‘Abolition of Civil Rights,’” and although author Tommy Christopher kindly allowed that “Trump’s statement was likely unintentional,” he pointed out, “it is true that many people of faith used the Bible to justify slavery, as well as to support Jim Crow laws. But the civil rights movement was also led by faith leaders like Dr. Martin Luther King Jr., who did so through political activism.” Way to skip over the fact that slavery abolitionists were people of faith.

And, because searching Twitter for random people’s comments on a subject is considered journalism these days, the UK Independent’s Indy 100 had a post up titled, “Trump said that one of America's greatest accomplishments is the 'abolition of civil rights' and the internet is losing it,” snarking, “Maybe we should cut him some slack as he's not used to working this early in the day.”

Author Greg Evans did the heroic work of rounding up tweets from people calling the “epic” and "amazing gaffe" a “Freudian slip” or “ironic misspeak,” with others calling it a “moment of honesty,” including one Social Justice Warrior fuming, “’Abolition of civil rights’ HE AINT EVEN TRYING TO HIDE IT ANYMORE. This is what the agenda of thus [sic] Administration is. Point blank period.”

Of course, all this trolling allowed them to ignore or bury Trump’s important words on abortion: "Children, born and unborn, are made in the holy image of God. Every life is sacred and every soul is a precious gift from heaven, as the Lord says."