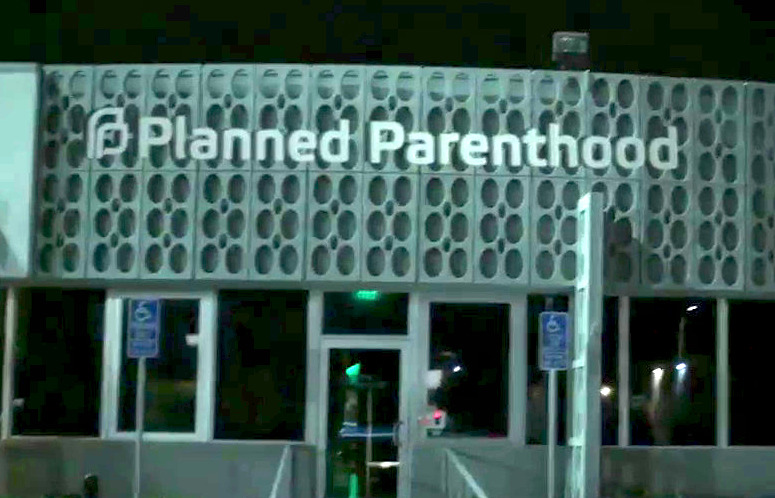 This season of American Horror Story: Cult on FX has focused on Trump-like cult leader Kai Anderson (Evan Peters) and his quest for world domination, one killing at a time. In Tuesday night's episode “Charles (Manson) in Charge,” the murder plot involves Planned Parenthood and, of course, pro-lifers are hardest hit.

When Kai doesn’t like the news on TV, he manipulates it, creating his own news stories and narratives to advance his political agenda through grisly murders meant to scare people into supporting him. So far it’s worked. He orchestrated a satanic murder to boost himself in the polls for City Council, then a mass shooting to gain national attention.

Now Kai has his sights set on running for Senate in 2018 (and president after that) so he holds a rally to call out the sitting senator. One of his first talking points is about abortion: “I mean, we got to talk about some of this guy's extreme positions. Anti-life? This man is for third-trimester abortions, people.”

After the rally ends with protesters throwing bottles of urine and him being maced (don’t worry, milk was on hand to help wash his eyes out), Kai rants about the news coverage of the event, “We're not the ones wearing ski masks. We're not the ones throwing piss bottles. We shared ideas. And these Woke Warrior assholes, they get anointed right here on national TV! Fake fucking media! When the Woke Warriors get to hide their hands, we're just gonna have to cut them off and show the world!”

Except they are the ones wearing clown masks, creating fake media and what they're about to cut and show the world is their own dead cult member in a false flag operation.

Little does Gary know, he is to be the sacrificial lamb for the next stage of Kai’s plan. The cult surrounds Gary, stabs him to death and puts his bloody body in front of the Planned Parenthood with the sign “Stop the Slaughter.”

Kai then goes on TV to blame the murder of one of his supporters on the senator and “anti-life zealots.”

Beverly: The marathon of violence continues in Brookfield Heights with the murder of local grocery store manager Gary K. Longstreet. Mr. Longstreet's body was discovered by an employee of Planned Parenthood in the alley behind me. Here to comment, Councilman Kai Anderson.

Kai: Thank you, Beverly. Gary was one of my earliest supporters. He is... ...was a dear friend.

Beverly: I can't imagine the depths of sorrow you must feel right now.

Kai: Incredible sorrow. Gary was a kind, gentle man. A big teddy bear. I pray that Senator Herbert Jackson and the left-wing terrorists he supports are brought to justice.

Beverly: Are you suggesting a sitting senator is guilty of murder?

Kai: He emboldened the violent fascists known as the Woke Warriors. These anti-life zealots... killed my friend because he had the radical belief that babies are people. Today, the victim is a pro-life patriot-- well, who's next? Pregnant women recognizing the sanctity of life growing inside of them? Any more blood shed by the Woke Warriors is on Senator Herbert Jackson's hands.

Obviously, this is all a parody of what Ryan Murphy and the writers think conservatives and pro-lifers are like. Evil, murderous Kai is playing the pro-life conservative, using buzzwords like “sanctity of life” and talking about babies being people. (Wink, wink, nudge, nudge, Kai and his Alt-Right killer clown cult are the real anti-life zealots.)

This is at least the third time the big abortion business Planned Parenthood has been featured on American Horror Story: Cult, which, considering the show title, seems quite appropriate.