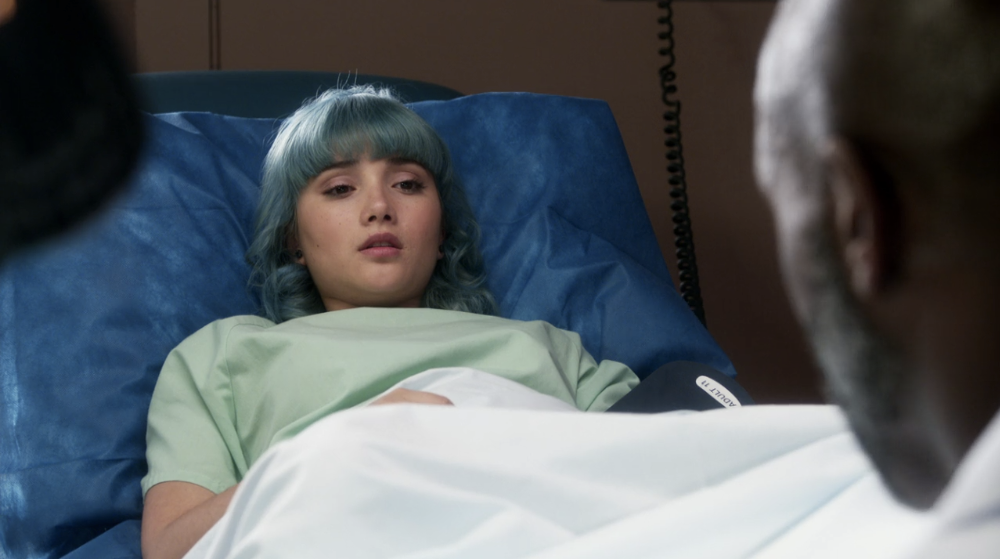 There is so much liberal propaganda to be appalled at from the third season of the Canadian teen drama Degrassi: Next Class, out now on Netflix. I suppose it’s to be expected when the creator bemoans “some of the scary right-wing thinking that's out there.” But all the teen sex – both hetero and homo, lectures on Syrian refugees, and talk of “safe spaces” pales in comparison to how the series handles abortion.

In episode 8, titled “#IRegretNothing,” 16-year-old Lola Pacini (Amanda Arcuri) discovers she got pregnant from – get this – a one night stand with her best friend’s bisexual older brother while his boyfriend is in the hospital recovering from a coma. That pretty much sums up the outrageous series in one crazy sentence.

By the time she’s taken a pregnancy test, Lola has already decided she’s getting an abortion, justifying it to her friend Yael (Jamie Bloch) saying, “I’m not ready to be a mom and there’s no way I’m walking around school pregnant for 9 months.”

Yael goes with Lola to their friendly neighborhood abortionist. Of course, we’d never see a portrayal of a rude, uncaring abortionist with a filthy operating room, like Kermit Gosnell… Or Douglas Karpen… Or Steven Chase Brigham... Or Vikram Kaji… Or Melvin L. Henderson… I could go on and on.

The abortionist calmly explains the procedure and how he will “suck out the contents of the uterus” (a nice euphemism for killing an unborn human) and chats casually with her about school. When Lola asks him, “Am I the first 16-year-old you’ve ever done this to?” the kindly abortionist reassures her, “You’re not the first today.” See? Abortion is as common as getting a tooth pulled!

After being embarrassed by her Google searches on abortion being exposed to her classmates, Lola’s friends Frankie (Sara Waisglass) and Shay (Reiya Downs), who don’t know she got an abortion, try to comfort her and in doing so confirm that abortion is a “big deal” and “killing a baby.”

Frankie: You had a pregnancy scare and you wanted to know your options, it’s nothing to be ashamed of.

Shay: Yeah, it’s not like you actually had an abortion.

Lola: And that would be a reason to be ashamed?

Frankie: No, but abortion’s a big deal, I mean, you’re kinda killing a baby.

God forbid someone feel ashamed for something they did that was wrong! Somehow liberals have turned shame into a greater taboo than killing a baby.

Lola wonders why she doesn’t feel sad about the abortion, but Yael tells her, “A lot of women have abortions and feel no shame,” citing Nicki Minaj as one celebrity who had an abortion in high school – she left out the crucial fact that Minaj said the abortion “haunted me all my life.”

When Lola says she feels like she’s the first, Yael says, “Yeah, because the world makes everybody too scared to talk about it.” This convinces Lola to make a video declaring she’s not ashamed of her abortion, neatly adhering to the trendy feminist movement to “destigmatize” and #ShoutYourAbortion.

After watching Lola’s video, Frankie and Shay say they don’t know what they’d personally do in that situation but Frankie gushes, “Making that difficult choice and standing up for it? You’re courageous! We should go out and celebrate!” Yeah, let’s all go out for ice cream to celebrate Lola’s abortion! (They really do this.)

Miles (the father of Lola’s aborted baby) walks by and asks where they’re headed. “To celebrate Lola’s bravery!” Frankie proudly declares. Miles jokes, “Did she save a cat from a tree?” No, nothing so noble, she killed the unborn baby you didn’t know existed and then shared the story of her abortion online without telling you first. Now, who wants ice cream?! Bleh!

You have to wonder what was going through the minds of the creators of Degrassi: Next Class to put together an episode like that. Conveniently, they tell us exactly what – they wanted to indoctrinate young girls who watch the show with pro-choice propaganda.

Series co-creator Linda Schuyler said, “[W]e wanted to show that is possible to make a strong choice like this and it be OK… We thought for young, modern women, it's very important to signal to them that it is their body, it is their choice.” Schuyler said episode writer Sarah Glinski was also "really big on wanting to show that there's no shame in what Lola did, and we wanted to see Lola own it. I think that's very positive for young girls."

For her part, Arcuri, the 19-year-old actress who played Lola, said, "I think that it will help a lot of teenagers realize that, 'Hey, it's OK if I do this because it is my body and I can be strong after this, I'll get through this, I have lots of people supporting me… I'm happy that the writers gave me this opportunity to portray it and help young girls."

No, it is NOT positive or helpful for young girls to see abortion as a small thing that you celebrate with ice cream. Too many women regret and are hurt by abortion, sometimes not until decades later, even when they don’t feel ashamed immediately after.

Liberals think they are helping girls by whitewashing abortion, but are ultimately only hurting them more, and that’s the real shame.