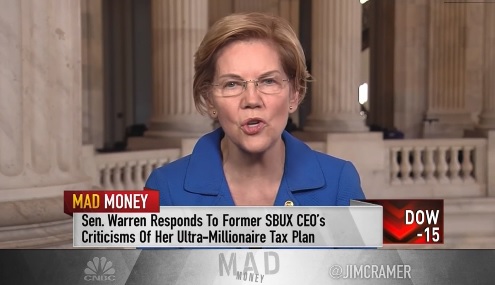 Sen. Elizabeth Warren, D-Mass., defended her call for an “ultra-millionaires” annual wealth tax as “how the system is supposed to operate,” and “part of the social contract” of America in a CNBC interview.

Wait, since when did wealth redistribution and punishing the wealthiest by instituting a new tax to take $2.75 trillion away from them for what they’ve accumulated become part of the “social contract” of the U.S.?

Coming up with an idea for a product or service and building a thriving business is part of the fabric of the American dream. Yes, sometimes those dreams and ideas were successful enough to make individuals extremely wealthy (too wealthy, according to Warren and other progressive politicians).

CNBC’s Mad Money host Jim Cramer pushed back and asked Warren hard questions about the wealth tax idea on Jan. 31. He noted some of the billionaires Warren criticized not only created businesses (providing jobs), but that they were also giving back to society in many ways including helping people get a college education.

Warren had blasted “billionaires like Howard Schultz and Michael Bloomberg,” as wanting to “keep a rigged system in place that benefits only them and their buddies.” Note that both those billionaires are liberals who may run for president in 2020.

After quoting her, Cramer defended former Starbucks CEO Schultz for creating “an institution that’s put food on the table for 300,000 people and offered a chance for baristas to go to college.”

He added that, “Michael Bloomberg, I think you have to agree, has done more for higher education in terms of trying to get people who are not wealthy into these schools.”

But Warren didn’t back down from her punitive scheme.

“When you make it big, when you get so much from this country, then you gotta take a little piece of that and you’ve got to put it back in,” she insisted to CNBC.

Warren simultaneously described her proposal as taking “a little piece” from such billionaires and bragged that it would bring in $2.75 trillion over 10 years. That’s “money we need,” she claimed. That “little piece” would work out to more than $36 million each on average, for the 75,000 households CNBC said it would impact. Forbes.com estimated some would pay far more.

She didn’t clarify that her proposal is not on an individual’s income but meant to take 2 percent or more of the value of their total assets (homes, art, cars, everything) annually. After they’ve already paid local, state, federal and business taxes annually throughout their careers.

Warren labeled those people “freeloaders” and claimed that “All I’m asking for is a little slice from the tippy, tippy top.”

Late in the interview Cramer quoted Bloomberg’s claim that socialist Venezuela is a warning against such “radical” redistribution of wealth. But Cramer gave Warren the benefit of the doubt, declaring “I know you’re a capitalist. I know you’re not declaring war against billionaires. How do we reconcile this?”

She didn’t answer the question, choosing instead to bash Bloomberg and other billionaires considering a run for president.

Some media outlets have promoted Warren’s idea, although Goldman Sachs president Gary Cohn told CNBC on Jan. 30, it would be “harmful to the U.S. economy.”