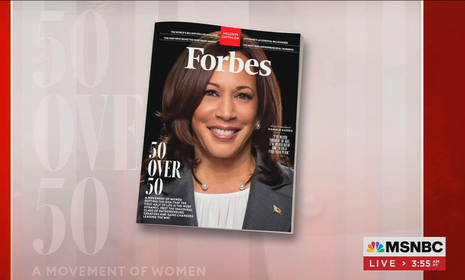 Forbes magazine has become a shill for President Joe Biden’s administration, and the liberal media are eating it up.

Forbes featured an image of Vice President Kamala Harris on the cover of its new 50-Over-50 “inclusive capitalism” issue promoting an essay she wrote for the magazine. The headline of the essay reeked of liberal propaganda: “Kamalanomics: Vice President Harris Outlines Her Vision Of Inclusive Entrepreneurship.”

Axios used the Forbes cover story to fawn: “Kamala Harris steps up focus on small business.” Axios apparently recovered quickly after Harris lied to the publication about the Biden administration starting from “scratch” on coronavirus vaccine production. MSNBC’s Morning Joe co-host Mika Brzezinski also ran an entire interview with Harris on June 1 based on the Forbes cover and tried to sell her as a champion of small businesses.

It’s too bad CNN ran a May 25 story warning about the economy under the Biden/Harris duo: “Inflation is back. Biden should be worried.” Money & Markets, likewise, just published a piece ripping the state of the economy under Biden: “The Fed Wanted Inflation — It May Get Stagflation Instead.”

Morning Joe’s pro-Harris “50-Over-50” interview sounded like state-run media. In one segment, Harris spewed: “I eat 'no' for breakfast. So, have I been told many times during my career, um, things from, 'Oh, you are too young. It's not your turn. They’re not ready for you. Um, no one like you has done it before,' I’ve heard all of those things many times over the course of my career.  But I didn't listen.”

Brzezinski, apparently itching to agree with Harris, parroted Harris’s “breakfast” angle: “[W]e get set back by ‘nos’ I think. You get a ‘no,’ and I think some women take it — a lot of them — take it really personally. And I love that you eat them for breakfast. I’m going to take that with me.”

The lurch leftward for Forbes is becoming more explicit. Chief Content Officer of Forbes Media and Editor of Forbes Magazine Randall Lane published an asinine op-ed in January threatening to blacklist companies that hired former President Donald Trump’s White House officials. Lane wrote: “Let it be known to the business world: Hire any of Trump’s fellow fabulists” and “Forbes will assume that everything your company or firm talks about is a lie.”

Lane threatened companies further by flexing his organization’s influence: “Want to ensure the world’s biggest business media brand approaches you as a potential funnel of disinformation? Then hire away.”

Conservatives are under attack. Contact Forbes at (800) 295-0893, Axios and MSNBC at msnbctvinfo@nbcuni.com and demand they do their jobs and quit acting like the propaganda arm for the Biden administration.