Isn't it fascinating that the liberal media lecture us about all the dangers of misinformation about the coronavirus, but now the Biden-Harris team just keeps repeating nonsense about how they had to start "from scratch" on the vaccine? That there was "no plan"?

Even after CNN fell on its face running this claim from an anonymous source, only to be corrected by media darling Anthony Fauci, Vice President Kamala Harris said it out loud to Axios reporter and co-founder Mike Allen for the website's HBO show. Allen just accepted this garbage.

HARRIS: There was no stockpile! Right? It's, in many ways --

ALLEN: No stockpile of?

HARRIS: Of vaccines! Right? So we're looking at, there was no national strategy or plan for vaccinations. We were leaving it to the states and local leaders to try and figure it out. And so in many ways, we are starting from scratch on something that's been raging for almost an entire year.

Allen could only follow up with "So are you having to adjust your sights now of what's possible, given that?" Pathetic. And that's the headline Axios put on it, no need for a reality check:

But it gets worse. Twitchy reported that Axios originally tweeted Kamala's kooky claim with the Fauci rebuttal from January....and then they took that tweet down, and kept running the uncorrected video in tweets.

He should have responded with the facts on the ground, with what Derek Hunter tweeted: "How can there be no stockpile when a million people a day were being vaccinated when they took office? Where were those coming from?" She and Biden have a nasty habit of transparently lying there was "no plan" or "surrendered" on the coronavirus, which certainly contradicts everything Fauci, Birx & Co. were doing. 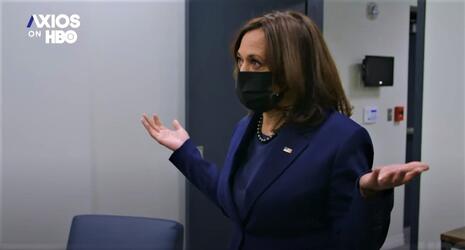 She closed the clip by saying everyone at her meeting with mayors on laughed. They should have laughed at how wrong she was.

Can we expect ANY "independent fact-checkers" to locate this obvious misinformation, just lying there? Or should we trust the hot take of "Neontaster" Noam Blum? "Can't wait for the 15 fact checks no one will run about this."

PS: Axios also talked to Dr. Fauci, but apparently not about this "start from scratch" song and dance. Instead, they previewed him slamming the "super spreader" Trump White House. They always use just the Fauci that fits their narrative.