Nets Ignore CBO Report: Economy Will Recover in 2021 Without Biden 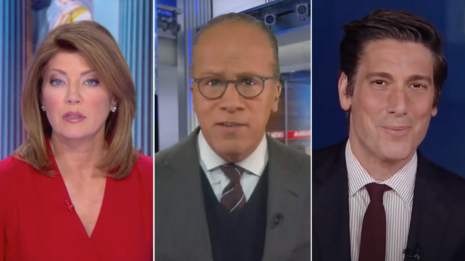 Fox Business reported that “The US economy will bounce back to its pre-pandemic size by the middle of the year without any emergency stimulus, the US Congressional Budget Office [CBO] projected Monday [February 1].” The CBO report specifically stated that if “current laws governing federal taxes and spending (as of January 12) generally remain in place and that no significant additional emergency funding or aid is provided,” the economy will continue to strengthen "during the next five years." But guess what. ABC World News Tonight, CBS Evening News and NBC Nightly News ignored the CBO report altogether during their February 1 broadcasts. [Emphasis added.]

The CBO report suggested that if Biden doesn’t change the current policies that were active under Trump, the economy would rapidly recover. Two of the improvements were definitely encouraging. First, “Real GDP expands rapidly over the coming year, reaching its previous peak in mid-2021, and surpassing its potential level in early 2025.”  Also, the CBO report projected that many people will “rejoin the civilian labor force who had left it during the pandemic, restoring it to its pre-pandemic size in 2022.”

The CBO report had other positive news that reflected well on the Trump administration:

CBO currently projects a stronger economy than it did in July 2020, in large part because the downturn was not as severe as expected and because the first stage of the recovery took place sooner and was stronger than expected.

The irony was that all three networks reported on Biden’s $1.9 trillion rescue plan after his meeting with ten Republican senators on the matter of COVID relief, but none bothered to cover the CBO report. The networks did — of course — attack the GOP’s counter-proposal for a relief plan that had a much smaller price tag.