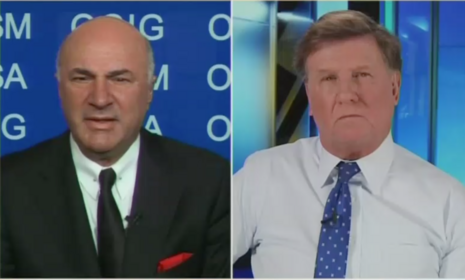 During the Dec. 7 edition of CNBC’s Squawk Box, co-host Joe Kernen asked O’Leary if it was “possible to thread the needle” between “total lockdowns” and protecting the “vulnerable, because the cure” could be “as bad as the disease.” O’Leary didn’t hold back his frustration against what these orders have done to food service businesses where he holds shares, specifically in Los Angeles, California. O’Leary’s critique — in a nutshell — centered on the completely arbitrary nature of the lockdowns: “How can even the science justify that eating outside is less safe than eating in a big box retailer right across the street?” Los Angeles County had suspended outdoor dining late last month.

O’Leary exclaimed: “I have a very simple question: How is it possible, when I’ve spent 60- 80 thousand dollars on the back of the restaurant and the front of the restaurant to provide the seats and the heaters, and complied with the city ordinance, and was just about to reopen — no tents — this is not tented — this is outside with air flowing — I’m shut down?” O’Leary then noted the city’s double standard in issuing restrictions that favored select businesses providing similar food services while destroying his own: “And right across the street is a big box retailer with food services — vending machines — and open service courts inside the store, providing food inside of a big box.”

O’Leary then blasted the double standard: “So you’re telling me the viral load in the outside of my restaurant is higher than the viral load inside of the big box, which is enclosed? That’s ridiculous!” O’Leary concluded: “[T]here’s no science claim on this.”

Later in the segment, O’Leary was adamant that the American people should be trusted to make choices themselves as opposed to being subject to tyrannical lockdown orders. According to O’Leary, “[P]eople should make their own decisions. I’m simply questioning the policy that we have.”

O’Leary then shifted focus to how the national government is dealing with the economic recovery. He specifically took aim at a recent Senate proposal for $17 billion to fund airlines, while other critical business sectors like food services are suffering.

O’Leary didn’t let up in his cross-examining of why this double standard meant he had to “go bankrupt. What about all the people that work in that restaurant? What’s going to happen to them,” questioned O’Leary.

Conservatives are under attack! Contact CNBC at 201-735-2622 and demand they report on the adverse effects any more draconian economic lockdowns would have on American businesses.