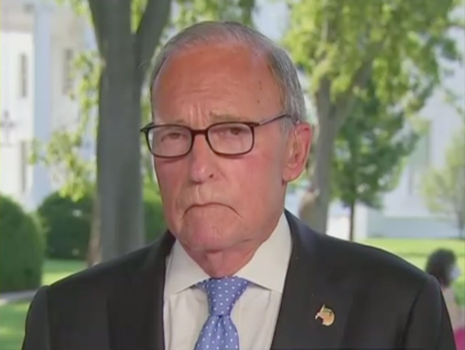 Kudlow was interviewed by CNBC’s Joe Kernen during Wednesday’s edition of CNBC’s Squawk Box, where the economist shut down the doom-and-gloom economic predictions such as what news outlets were pushing in the face of the great June Jobs report.

Kernen told Kudlow that “There are some that say that you’re going to see a bump in the road here based on the negative news we’ve seen, and it’s going to translate into the economy decelerating in its recovery. Do you see that?” Kudlow answered by saying that “at the moment Joe —as you noted — we’ve created 8 million new jobs in the last couple of months.”

Kudlow pointed out economic indicators, such as how “retail sales” were “skyrocketing across the board,” how “new business applications are doing very well,” and how “people are driving more according to the Apple Mobility Index.” Pivoting off from this, Kudlow proclaimed that “virtually every piece of data shows a V-shaped recovery.”

Kudlow was sure to acknowledge the threat of the coronavirus and its effect on the economy if states shut down again: “I acknowledge the threat, okay? And we are scouring the numbers and we’re watching it very, very carefully to see.” Kudlow said that “you just can’t rule out anything. But at the moment, the best guess is we’re going to be OK."

Kudlow isn’t the only one to have expressed this sentiment recently.

During the July 2, edition of Fox Business’s Mornings with Maria, Making Money Host Charles Payne praised the latest June jobs report as a strong indicator of a V-shaped recovery.

“The market keeps saying V-shaped recovery even though the economists keep saying it’s impossible,” he said.