The left have cheered Sen. Elizabeth Warren’s (D-MA) rise in the polls after the Democrat debates. Now they have pronounced her Wall Street’s choice for the 2020 presidential election.

Bloomberg reporters Lananh Nguyen and Tyler Pager on July 3 praised Warren for drawing support from a “small but growing circle of senior bankers and hedge fund managers” on Wall Street. They presented Warren as an “acceptable alternative” to left-leaning Wall Streeters, in contrast to the candidates who “trigger their most visceral objections.” Of course, those candidates were President Donald Trump and democratic socialist Sen. Bernie Sanders (I-VT).

Never mind that her campaign said in an emailed statement, “No one will be tougher on Wall Street as president than Elizabeth will be,” according to Bloomberg. 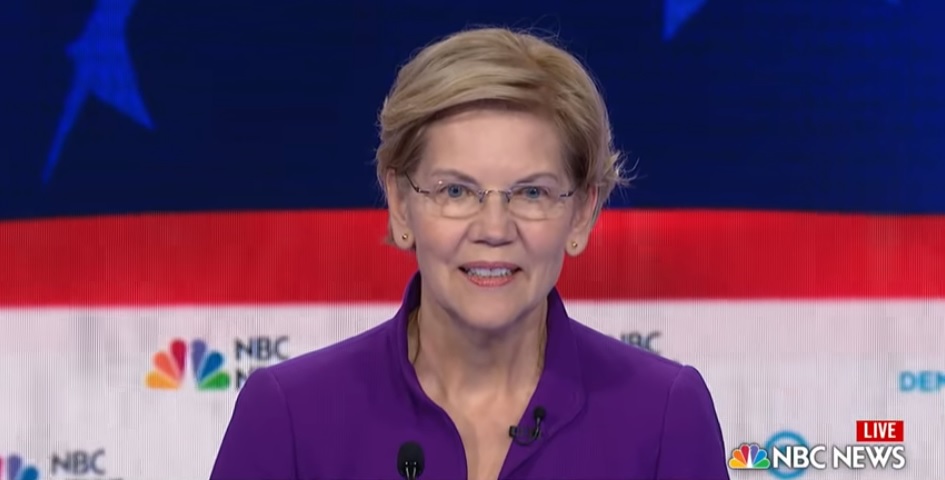 Nguyen and Pager mentioned how liberal Wall Streeters “expressed sympathy” toward Warren’s calls to increase regulations after the financial crisis of 2008. They described the feared backlash and political pressure over wealth gaps as “pitchforks.”

Despite her frequent attacks on business, Bloomberg suggested Wall Street’s supposed “openness toward Warren” was an indication of how its views “have proven adaptable over the years.” Citing Tufts University professor Jeffrey Berry, it argued “her views have become more accepted” because her complaints over income inequality are now “becoming more mainstream” on Wall Street.

That is, among liberal Wall Streeters.

Washington Post national reporter on economic policy Tory Newmyer warned Warren’s rivals on June 26 to attack her “at your own peril,” claiming she had strong support from “financial industry pros.” She described Warren as an “approachable everywoman” and praised her “ruthless” attacks on regulators and executives in the financial industry.

The Post quoted president of Capital Alpha Partners Charles Gabriel in praise of Warren’s campaign style. “She’s been a force in politics,” he said. “She strikes fear into financiers.”

Gushing over her supposed “expertise,” Newmyer referred to Gabriel’s colleague Ian Katz. Katz enthused how Warren was “armed with statistics and research” on many fiscal issues, and highlighted her prosecution of Wells Fargo in 2017 as evidence of her ability to stand out from her rivals on the campaign trail.

Left-wing MarketWatch writer Tim Mullaney also raved about Warren on June 27, dismissing any thought she would run as a candidate “who scares Wall Street silly.” He painted her as a “moderate” despite her plan to slap a wealth tax on individuals worth at least $50 million, and boosted her claim that Massachusetts taxpayers “have benefitted too much from a generation of tax-cutting.”

Not surprisingly, The Wall Street Journal called out Warren’s anti-business views, blasting her on July 2 for criticizing former Food and Drug Administration (FDA) commissioner Scott Gottlieb’s return to the private sector. According to Warren, Gottlieb “committed the sin of joining the board of directors of Pfizer Inc” after working in the Trump Administration.

The Journal chastised Warren for discounting anyone from working in government “unless they’re public-interest lawyers or have spent years camping out at progressive groups.” It dismissed her criticism of Gottlieb as nothing more than a “political stunt,” and castigated Democrats for embracing “open hostility” against business as a cynical “political tactic.”