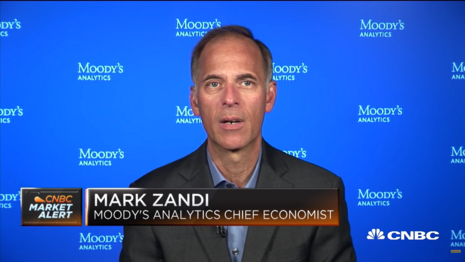 A high-profile liberal economist — and reported Hillary Clinton donor — said that the chances of recession in the U.S. are looking increasingly more likely, according to CNN.

Moody Analytics Chief Economist Mark Zandi reportedly said that the “US economy has at least a one-in-three chance of sinking into a recession over the next 12 months,” CNN Business summarized. Zandi’s ominous prediction broke with his previous proclamation that a “total Democratic sweep [in the 2020 elections] would bring the biggest boost to the economy.”

The New York Times reported back in 2016 that Zandi was a “registered Democrat” and a donor to Hillary Clinton, as records on Open Secrets also suggest.

The liberal economist’s initial forecast about economic paradise in a leftist-run economy has so far turned out to be total bunk. A recent survey of consumer sentiment by the University of Michigan found that Americans are extremely pessimistic about the economy. Consumer sentiment reportedly plummeted to its lowest level since 2011, during the Great Recession. Inflation also shot up to 7.9 percent in February on a yearly basis, its highest level in more than 40 years.

And it gets worse.

Gasoline prices skyrocketed up 38 percent, and the cost of meats, poultry, fish and eggs soared 13 percent in the same 12-month period, according to Bureau of Labor Statistics data.

It appears the hashtag “BidenBoom” that trended on Twitter in January has turned into something closer to a #BidenBust.

Instead of admitting the obvious failures of Biden’s policies, Zandi echoed the rest of the liberal media in using the war in Ukraine as a scapegoat for high inflation. The economist didn’t mention Biden in comments for the CNN article, despite a recent poll released by Rasmussen Reports that found 64 percent of likely U.S. voters believe Biden administration policies have worsened inflation.

Zandi emphasized that the Russian invasion of Ukraine and increases in the cost of basic goods have “really changed things” in the economy. But the story quoting Zandi omitted any mention of the effect of Biden’s COVID-19 stimulus on inflation. As Cato Institute Tax Policy Studies Director Chris Edwards explained in exclusive comments to MRC Business: “Ongoing federal deficits of more than $1 trillion a year are helping to fuel historic inflation, so any further spending increases would only make the inflation fire that much harder to extinguish.”

In other words, inflation was rising before Russia’s invasion of Ukraine started on Feb. 24. And for that reason, as Zandi himself reportedly said: “It’s reasonable to be nervous here.”

And even “reasonable” is an understatement. A few respected economists and political commentators have warned of stagflation, hyperinflation and even recession as a result of Biden’s disastrous economic policies.

MRC Business reached out to Moody’s Analytics for comment from Mark Zandi, but he declined to comment as of the publication of the story.

Conservatives are under attack. Contact CNN at (404) 827-1500 and demand it report on Biden’s responsibility for inflation and the American energy crisis.