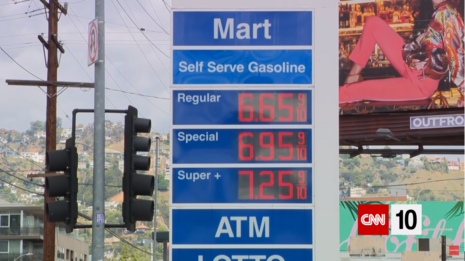 The liberal media has been firing its propaganda machine on all cylinders to cover for President Joe Biden’s disastrous energy policies that helped send gas prices sky-high.

It seems The New York Times, CNN, Bloomberg News and The Washington Post took a page out of White House Press Secretary Jen Psaki’s playbook with article headlines that read more like Soviet-style agitprop than news.

The Times vigorously defended Biden for soaring gas prices in an article with this asinine headline: “Republicans Wrongly Blame Biden for Rising Gas Prices.” Bloomberg News seemed to muddy and confuse the issue in a story headlined, “Who’s to Blame for the Pain at the Pump? It’s Complicated.” And Biden’s cheerleaders at CNN published this horrendous headline: “Gas prices are in the danger zone. Biden can’t do much about it.”

Could Biden have asked for better friends in the liberal media?

The New York Times was definitely the worst in its spin. The liberal rag contended that “The primary reason for rising gas prices over the past year is the coronavirus pandemic and its disruptions to global supply and demand.” But the outlet undercut itself in a buried section of its story that cited Director of Research & Advisory and Head of North America Energy Research at Energy Intelligence Abhiram Rajendran. Rajendran actually blamed soaring energy prices on the Biden administration’s “‘pretty stark miscalculation of the amount of supply we would need to keep energy prices at affordable levels.’” But reading The Times’ headline would suggest Biden didn’t bear any responsibility at all.

CNN hit a similar note in a January 2022 article defending the Biden administration: “[P]residents have limited power to lower gas prices. While Biden has options, they all have drawbacks.” The piece quoted Rapidan Energy Group President and founder Robert McNally who said that Biden is “‘in a difficult situation’” on rising gas prices. “‘There are no magic wands here,’” he said.

CNN should probably read its own article from 2008 when it criticized former President George W. Bush for not doing enough to lower gas prices. The story, headlined “President, Congress offer no immediate help on gas prices,” complained that “Americans are looking for more action” on the 2008 gas crisis. The unequal treatment of the two presidents in the stories clearly exposes the network’s hypocrisy.

Bloomberg News attempted to soften the blow to the Biden administration by shielding the president from criticism about his energy policies back in 2021. The outlet downplayed the potential benefits of the Keystone XL Pipeline that Biden canceled. Jay Hakes, who was administrator of the Energy Information Administration during the Clinton administration, reportedly said that he would be “‘surprised if it made as much as a penny difference in prices at the pump.’”

But Hoover Institution Peter and Kirsten Bedford Senior Fellow Richard Epstein told a different story. Epstein wrote in a January blog post that “the increased supplies of oil through Keystone XL would have reduced oil prices in the world markets and made it easier to find energy for the vulnerable New England states, which will have to continue to heavily rely on imported oil and gas to meet their energy needs.”

Newsweek also shielded comments Psaki made during an exchange with Fox News White House correspondent Peter Doocy on March 7. Psaki argued that the “anticipated” gas price spikes were “‘a direct result of the invasion of Ukraine.’”

Forbes also shot down Psaki’s fiction that Biden bears no responsibility for high gas prices in the U.S. The outlet countered, “oil and gasoline prices have risen steadily throughout the Biden administration” and criticized the administration for “changing its narrative about high gas prices.”

Conservatives are under attack. Want to help expose liberal media bias? Contact The New York Times at (800) 698-4637, CNN at (404) 827-1500, Bloomberg News at letters@bloomberg.net, and Newsweek at support@newsweekgroup.com and demand they report honestly on the Biden administration’s responsibility for the American energy crisis.