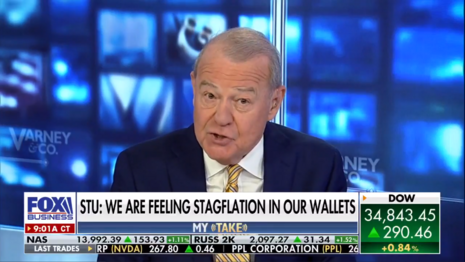 Varney cautioned that inflation will likely escalate in the coming year and potentially even trigger stagflation. “We haven’t felt it in a generation but it sure looks like it’s headed our way again,” Varney said.

Economic pains including spiking food prices, increased gas prices and burdensome electricity bills are currently exacerbating a serious problem that “everybody can see and feel," according to Varney. The Fox Business host also put the political ramifications of stagflation in context: The last time the U.S. economy suffered under a period of stagflation was in the late 1970s and early 1980s.

It wasn’t long before “an angry electorate” booted President Jimmy Carter out of the White House in protest over long gas lines and stagflationary pains. Depending on how hot inflation runs in the coming months, we could experience something of a déjà vu moment this November.

“We’re already feeling stagflation in our wallets,” Varney said. “I think the politicians will feel it at the ballot box, and soon.”

Stagflation is “slow growth or ‘no’ growth, with rising prices,” Varney explained. “The economy will slow. That’s the ‘stag’ part of ‘stagflation’ — stagnant economy, rising prices.”

Stagflation would be even more dangerous than the record inflation already sapping Americans’ pocketbooks.

It seems that most Americans have started to pay attention, and are rejecting liberal media attempts to protect President Joe Biden from responsibility. Google searches for the term “stagflation” reached “peak popularity” between March 6 and March 12. A recent poll by Rasmussen Reports indicated that 64 percent of likely U.S. voters believe Biden policies have sent inflation sky-high.

Economist and Founder of Euro Pacific Asset Management, Peter Schiff, similarly warned on the March 12 edition of his radio show that the U.S. is on the fast track to stagflation and possibly even hyperinflation.

He reasoned that the “inflation that we have just experienced in the prior twelve months is higher than any twelve-month period during the entirety of the 1970s.”

Schiff claimed that the inflationary fire could end up turning into an inferno if left unchecked.