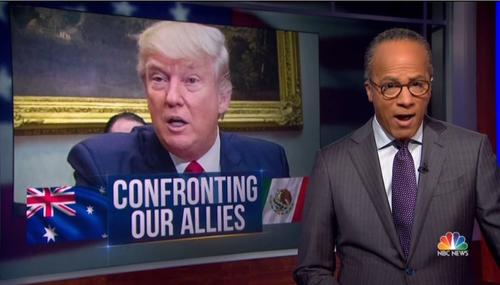 Nicholas Fondacaro
February 2nd, 2017 10:25 PM
NBC went all-out against President Donald Trump’s foreign policy during Thursday’s edition of Nightly News. They knocked Trump for getting tough with Iran, pretended he didn’t get tough with Russia, left out key parts of favorable quotes, and repeated dubiously sourced ones. “In these early days of his administration, President Trump is signaling a willingness to take the… 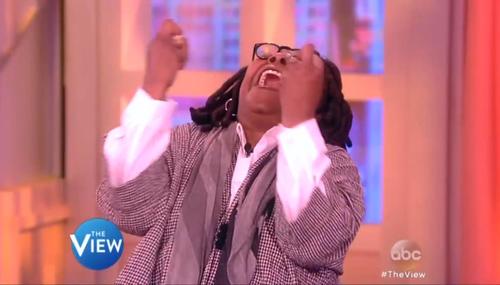 Kristine Marsh
December 29th, 2016 11:39 AM
From defending flag burning to justifying anti-Trump violence, the largely liberal panel at ABC’s The View frequently proved this year that the only “views” that were acceptable came from the radical left. We’ve broken down the worst of the worst liberal outbursts from the 2016 season in the cringeworthy video below. 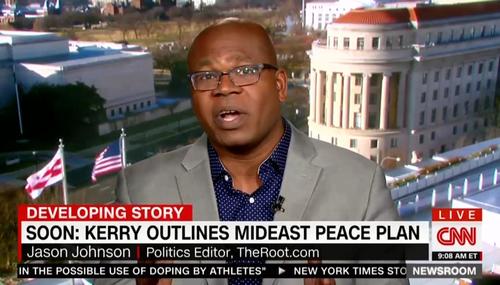 Brad Wilmouth
December 28th, 2016 1:33 PM
Appearing as a panel member on Wednesday's CNN Newsroom, Jason Johnson of The Root ridiculously claimed, during a discussion before Secretary of State John Kerry's speech on the Israeli-Palestinian conflict, that the United States "gives the vast majority of its foreign aid to Israel." In fact, according to the Washington Post, of the approximately $50 billion dollars the U.S.… 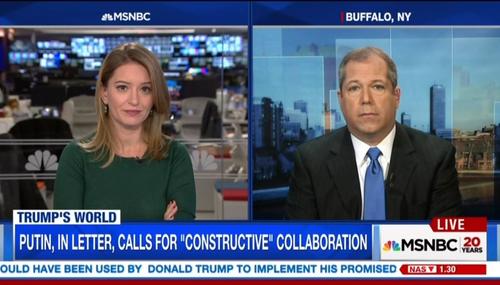 Nicholas Fondacaro
December 23rd, 2016 2:09 PM
Even with many of their top personalities on vacation Friday, it didn’t slow down MSNBC’s smearing of President-Elect Donald Trump. Fill in host Katy Tur was in an admitted state of confusion on MSNBC Live, because of perceived conflicts with Trump’s approach to dealing with Russia. “You know, I've got to say, I got a bit of whiplash here. I'm not quite sure what… 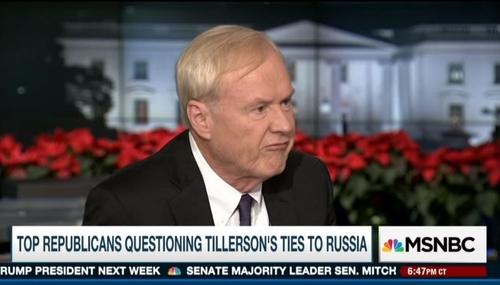 Matthews Is Livid Trump Might Move U.S. Embassy in Israel to Jerusalem

Curtis Houck
December 13th, 2016 11:07 PM
Amidst the discussion on MSNBC’s Hardball late Tuesday concerning President-elect Donald Trump’s selection of ExxonMobil CEO Rex Tillerson to lead the State Department, host Chris Matthews was apoplectic at the notion that a Trump administration would “desecrate” Jerusalem by moving the U.S. embassy there from Tel Aviv. 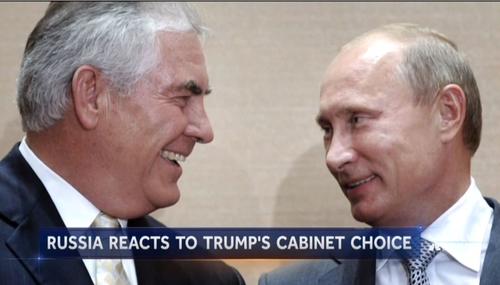 Nicholas Fondacaro
December 13th, 2016 9:55 PM
It appeared that NBC sharpened its claws in preparation for NBC Nightly News on Tuesday, as the network sent Richard Engel to Russia. The reporter was there to find dirt on President-elect Donald Trump’s pick for Secretary of State, ExxonMobil CEO Rex Tillerson. “I'm Richard Engel in Moscow, where the Kremlin couldn't be happier with the way Trump's cabinet is shaping up,… 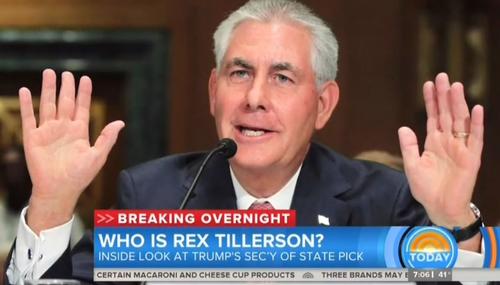 Kyle Drennen
December 13th, 2016 3:29 PM
As news broke on Tuesday that Donald Trump had officially tapped ExxonMobil CEO Rex Tillerson to serve as Secretary of State, the network morning shows all decried the business executive’s lack of “government experience” and warned of a “tough” confirmation “battle” in the Senate. 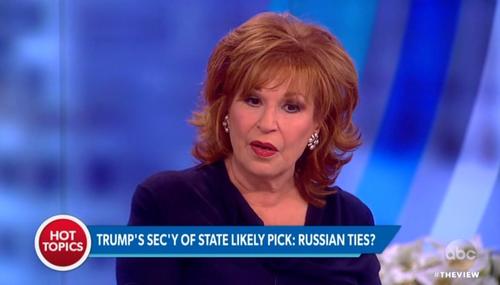 Behar: Trump Must 'Step Down' Before He Makes Flag a Communist Symbol

Kristine Marsh
December 12th, 2016 4:04 PM
The women at The View had a collective meltdown on Monday’s show after hearing ExxonMobil CEO Rex Tillerson was Donald Trump’s rumored choice for Secretary of State. Discussing Tillerson’s ties with Russia and the news from the CIA that Russians may have been trying to influence the election, the panel wondered aloud if Trump had anything to do with the hacking. An exasperated… 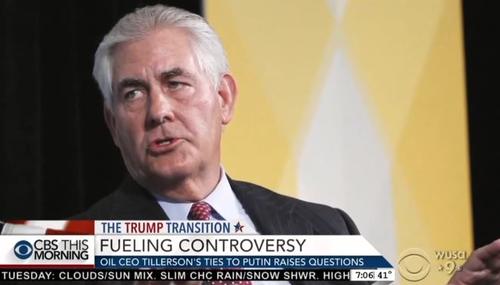 CBS to Schumer: Will Tillerson Have a ‘Problem’ Being Confirmed?

Scott Whitlock
December 12th, 2016 12:34 PM
All three morning newscasts on Monday speculated about issues in confirming potential Secretary of State nominee Rex Tillerson, but only CBS This Morning’s Charlie Rose put the question directly to incoming Senate Minority Leader Chuck Schumer. Rose prompted the partisan Democrat on the possible high profile pick by Donald Trump: “If Rex Tillerson is the nominee for the Secretary of… 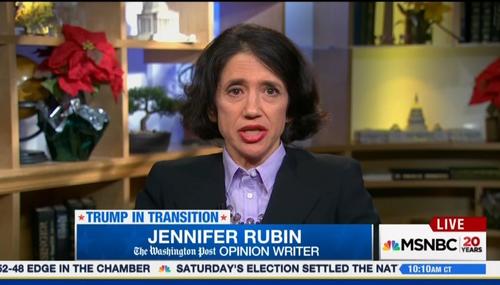 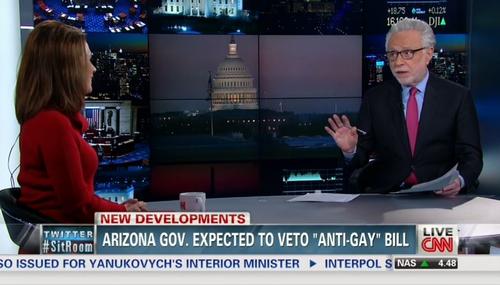 Paul Bremmer
February 26th, 2014 5:47 PM
Former liberal talk radio host Jim Hightower emerged from his present-day obscurity to spew venom at wealthy oil executives on national television Tuesday night. Hightower appeared on MSNBC’s All In with Chris Hayes to comment on the news that Exxon Mobil CEO Rex Tillerson has joined a lawsuit to block construction of a 160-foot water tower near his property in Texas. The tower would… 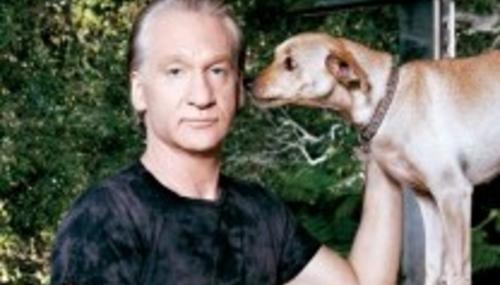 Kyle Drennen
March 9th, 2012 3:00 PM
In an interview with Exxon Mobil CEO Rex Tillerson aired on Friday's NBC Today, co-host Matt Lauer pushed the oil company executive to reject a plan by Newt Gingrich to lower the price of gas: "Newt Gingrich is promising Americans that he can deliver gasoline at $2.50 a gallon. Is he being truthful with the American public, in your opinion?" Tillerson responded: "Well, I…