Behar: 'It's Time' for Trump to 'Step Down' Before He Turns Our Flag Into a Communist Symbol

The women at The View had a collective meltdown on Monday’s show after hearing ExxonMobil CEO Rex Tillerson was Donald Trump’s rumored choice for Secretary of State. Discussing Tillerson’s ties with Russia and the news from the CIA that Russians may have been trying to influence the election, the panel wondered aloud if Trump had anything to do with the hacking. Whoopi Goldberg emphatically agreed that Clinton wouldn’t have lost the election if the DNC hadn’t been hacked, while Joy Behar speculated why Russia found no dirt on the RNC. An exasperated Behar blamed Trump for “encouraging” the hacking and demanded he “step down” before the inauguration. 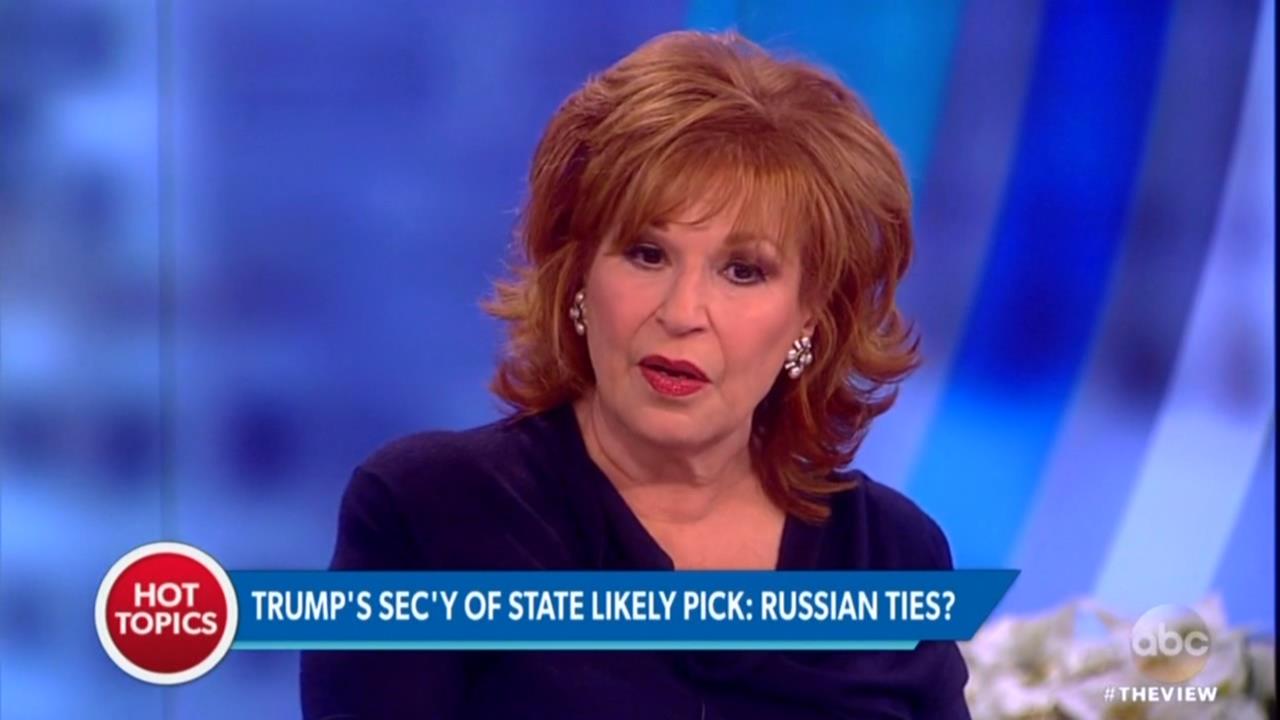 Behar then hyperbolically warned, that if Americans weren’t wary, Trump would turn our flag into a Communist flag.

WHOOPI: But do you believe Russian hacking could actually change the outcome? Yes! I do believe that. That's what I believe. [ Applause ]

Co-host Joy Behar joined in the authentic election skepticism, pointing out that the RNC didn’t get hacked by Russia.

Co-host Sunny Hostin became the voice of reason at the table, nothing that there is no evidence that the hacking resulted in Hillary losing, before noting how “troubling” it was for Trump to doubt the report.

HOSTIN: But it's possibly. We don't know for sure if there's this nexus between the Russians hacking into the DNC and Hillary losing but I think what is most troubling is that Donald Trump is saying that we don't know if Russia is behind the hacks when you have not one, not two, but 17 intelligence agencies agreeing that Russia, in fact, did do this to try to sway the election.

Behar added, “And Trump encouraged it!” before demanding Trump “step down” before he takes office.

BEHAR: It's like they are discrediting the CIA. His campaign and he, the President-elect of this country is discrediting the organization that basically protects us from foreign invasion, from, you know -- isn't it time for him to step down I mean, he has to step down before the inauguration, before they give him the nuclear codes. We are at risk when the President of the United States is fighting with the CIA. That is a terrible thing.

Later on the panel discussed Trump’s expected pick for Secretary of State, Rex Tillerson who in the past has made business dealings with Vladimir Putin. A flabbergasted Behar demanded, “Do we have to wait until the hammer and sickle is on the American flag until we stand up to this guy?”

During the show Whoopi Goldberg and Sara Haines also blasted Kellyanne Conway during a brief moment.

SARA HAINES: When Kellyanne Conway says this [Russian hacking election results] might be fake news at times when she refers to it, that's a problem.

BEHAR: She's coming here this week by the way.