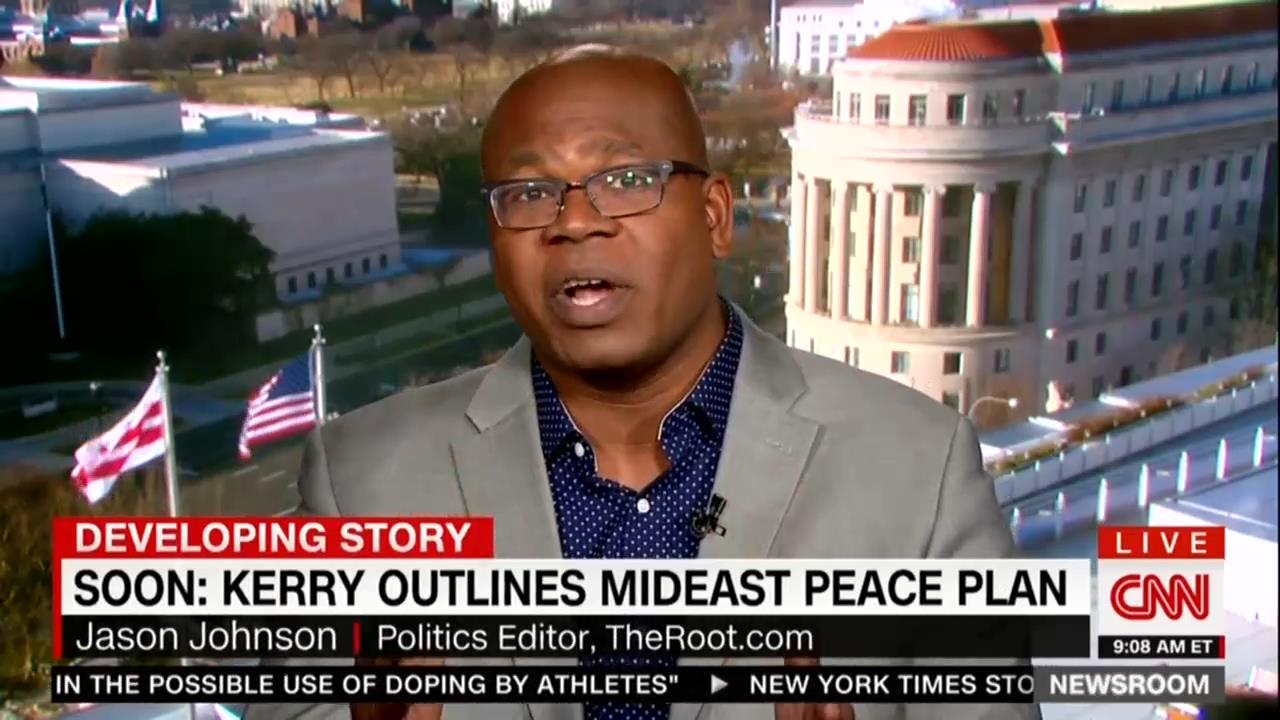 Appearing as a panel member on Wednesday's CNN Newsroom, Jason Johnson of The Root ridiculously claimed, during a discussion before Secretary of State John Kerry's speech on the Israeli-Palestinian conflict, that the United States "gives the vast majority of its foreign aid to Israel." In fact, according to the Washington Post, of the approximately $50 billion dollars the U.S. is expected to grant in foreign aid for FY 2017, Israel would only receive about $3 billion.

A bit later, Johnson -- recurring guest on CNN -- claimed that Secretary of State-designate Rex Tillerson is "in Vladimir Putin's pocket" and suggested that a President Donald Trump might be a "Manchurian candidate" for Russia as he fretted over the possibility that the Russian government had assisted in Trump's election by hacking the DNC

Do you expect that we will hear a response from the President when he returns to Washington? This is obviously from the Secretary of State, a member of his cabinet, but this animus some as some have called it is from the prime minister of Israel, a man of his level, should we hear from the President?

The Morgan State University professor then introduced misinformation into the discussion as he grossly exaggerated the amount of foreign aid Israel receives from the U.S. Johnson:

But the reality is this: The United States gives the vast majority of its foreign aid to Israel. There is but so much that Netanyahu can say right now because  he's at risk of that funding being cut back once Trump is in office because he has said that he doesn't want to continue paying for the world's problems.

A bit later, in the next segment, anchor Blackell brought up Senator John McCain's recent comments on Trump's reluctance to agree with reports that the DNC was hacked by the Russian government. Johnson responded:

Right. Victor, this is a fantasy assumption on the part of John McCain. Donald Trump does not care. He has selected someone for Secretary of State who is in Vladimir Putin's pocket. He allowed himself to work through the campaign with the assistance of hackers, of WikiLeaks, who are working in conjunction with Vladimir Putin and what remains of his sort of information state he's got.

He then used the term "Manchurian candidate" as he added:

You know, Donald Trump doesn't care about any of this. All he cares about is that fact that he's in power. But I think people who actually care about America and care about sovereignty and don't want the country run by a Manchurian candidate should actually step forward and say we need to investigate why this happened and do something about it.