Univision's news division is quick to remind us, as we recently saw, that it has a political agenda that extends far beyond immigration. Here's how late-night anchor Enrique Acevedo introduced his most recent valentine to the environmental lobby, with a story nakedly built on the flimsiest of premises.

ENRIQUE ACEVEDO, NEWS ANCHOR, UNIVISION: Climate change has become one of U.S. Hispanics' most priority issues. This is, among other factors, because they are more likely to suffer the consequences of the planet's deterioration.

Acevedo's introduction sets the tone for what is, as you would expect, a three-minute infomercial in favor of the climate advocacy agenda. To wit: the story introduced the climate skeptics in charge of climate policy within the Trump Administration, presented the unchallenged opinions of a pair of supporting left-leaning analysts, listed some oppositional Trump policies, and displayed some friendly data, before Acevedo decried the whole affair as a new front in the battle to protect the environment.

What Acevedo did not do, however, was show any data to substantiate the introductory points that sought to make the story relevant to Univision's audience - namely, that (a): climate policy is a high priority for Hispanics and (b): Hispanics were likelier to "suffer the consequences of the planet's deterioration".

Perhaps Acevedo meant to refer to this Earthjustice-Latino Decisions poll from 2015, which Univision boss Isaac Lee at the time deemed to be "super interesting" and showing "all the potential" while forwarding to Clinton campaign chairman John Podesta.

But there is other polling that suggests climate policy isn't even a top-ten issue for U.S. Hispanics. And then, after affirming the primacy of climate as an issue for Hispanics, Acevedo cites a Yale poll that samples the entire population as opposed to Hispanics. Let's face it: the insertion of Hispanics into the introduction of this report was little more than rhetorical duct tape and bubble gum with which to justify the story.

Acevedo's report ultimately served two purposes: One, to pass climate propaganda off as news without the burden of presenting opposing arguments - in keeping with how Univision normally covers those opposed to the network's agenda. The second was to showcase and demonize the climate skeptics in the Trump Administration, including newly minted EPA Administrator Scott Pruitt, a man who, according to Acevedo, shouldn't even be allowed to serve in government to begin with. 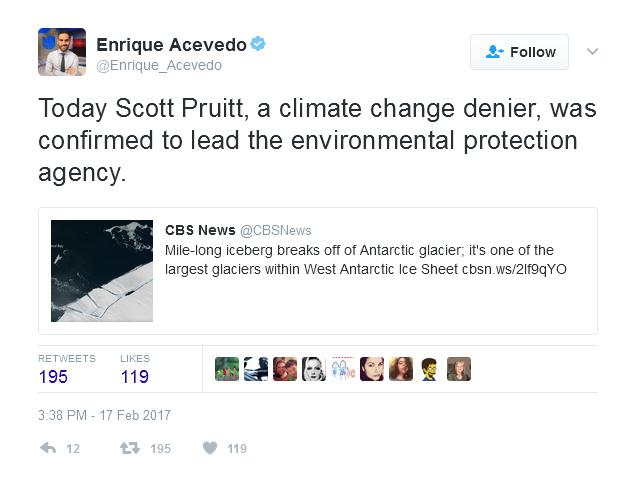 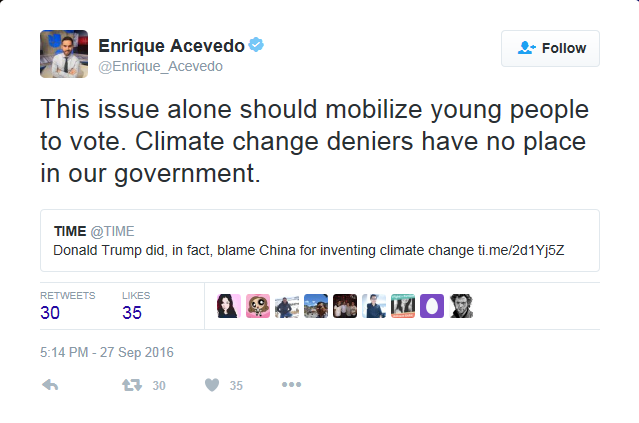 By now it should be clear that Univision is pushing climate policy as one of those issues on which Republicans "...will have to make peace with Latinos" post-immigration. Buyer beware.