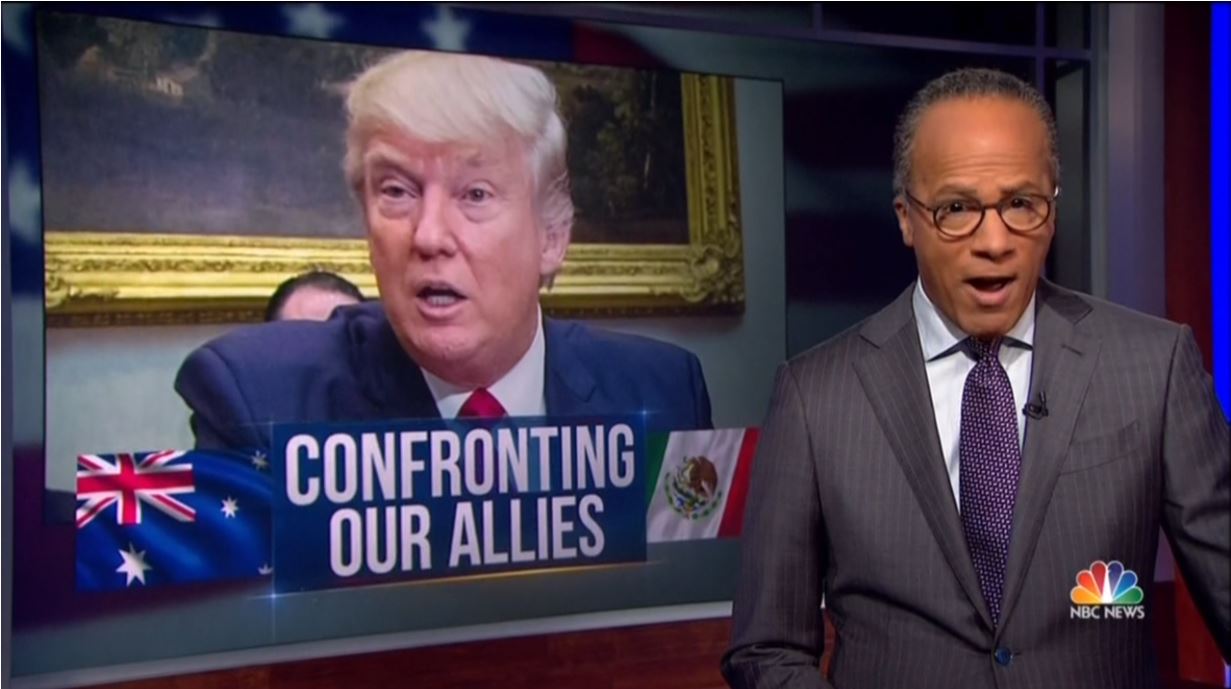 NBC went all-out against President Donald Trump’s foreign policy during Thursday’s edition of Nightly News. They knocked Trump for getting tough with Iran, pretended he didn’t get tough with Russia, left out key parts of favorable quotes, and repeated dubiously sourced ones. “In these early days of his administration, President Trump is signaling a willingness to take the tough approach over traditional diplomacy no matter the country,” quipped anchor Lester Holt, handing it off to Hillary Clinton-super fan Andrea Mitchell.

One of the major news stories of the day was US Ambassador to the UN, Nikki Haley, turning up the heat on our longtime adversary Russia for its role in sparking violence in its neighbor Ukraine. The newly confirmed ambassador took the firm stand against Russia in a UN Security Council meeting, stating, “The United States continues to condemn and call for an immediate end to the Russian occupation of Crimea… Our Crimea-related sanctions will remain in place until Russia returns control over the peninsula to Ukraine.”

There was not a single mention of this in Mitchell’s report, nor any report that evening. Mitchell pretended that Ambassador Haley’s address didn’t happen at all. She went so far as to mischaracterize the administration’s current stance with Russia, claiming, “Russia, where the president wants better relations despite a sharp spike in Russian-sponsored fighting in Ukraine.” This, from the network who once reported that Trump brought the entire world “anxiety,” while “in Moscow a party.”

Mitchell’s use of deceptively edited audio and quotes was another major problem with her report. She seemed eager to paint Trump’s phone call with Australian Prime Minister Malcolm Turnbull as negatively as possible. She played an audio clip of the PM saying, “As far as the nature of the discussion, it was very frank and forthright.”

But that’s not all Turnbull had to say about the call. He told an Australian radio station, quote, “The report that the president hung up is not correct. The call ended courteously. As far as the nature of the discussion, it was very frank and forthright.” Not as dark as Mitchell led NBC’s viewers to believe.

The NBC reporter also used a dubiously sourced quote from another phone call between Trump and Mexico’s President Enrique Pena Nieto. “And even Mexico, where Mr. Trump told the president, “You have a bunch of bad hombres down there.” The White House says he was being light-hearted,” she reported with absolutely no context to what was being discussed.

According to a team of CNN journalists, a transcript provided by Pena Nieto’s office shows Trump’s actual statement. “You have some pretty tough hombres in Mexico that you may need help with. We are willing to help with that big-league, but they have be knocked out and you have not done a good job knocking them out," Trump said. CNN deduced that “Trump made an offer to help Pena Nieto with the drug cartels.”

The quote Mitchell was using appeared to be what the Associated Press purported Trump said. Of AP’s quotes, CNN wrote, “The excerpt of the transcript obtained by CNN differs with an official internal readout of the call that wrongly suggested Trump was contemplating sending troops to the border in a hostile way.”

Mitchell’s distaste for Trump was evident as she closed out her report by gleefully touting an Iranian official mocking our president, “And tonight, a senior advisor to the Ayatollah says Iran won't be, quote, ‘intimidated by an inexperienced person!”

LESTER HOLT: Good evening. In these early days of his administration, President Trump is signaling a willingness to take the tough approach over traditional diplomacy no matter the country. Today, declining to take any option off the table in response to what the White House calls provocations from Iran. On the same day, we learned he may have antagonized the leader of close ally Australia in a phone conversation over resettling refugees. The Trump White House continuing to operate at breakneck speed with Iran in its sights tonight. Our chief foreign affairs correspondent Andrea Mitchell has details.

ANDREA MITCHELL: Tonight NBC News is learning from US officials, the president could unveil new economic sanctions against Iran as soon as tomorrow, reiterating he is leaving more options open.

DONALD TRUMP: Nothing is off the table.

MITCHELL:  The move coming just a day after this stern warning from the national security adviser.

MICHAEL FLYNN: As of today, we are officially putting Iran on notice.

MITCHELL: In response to Iran testing its ballistic missile and sponsoring terrorism, top Republicans agreeing with the need to retaliate. 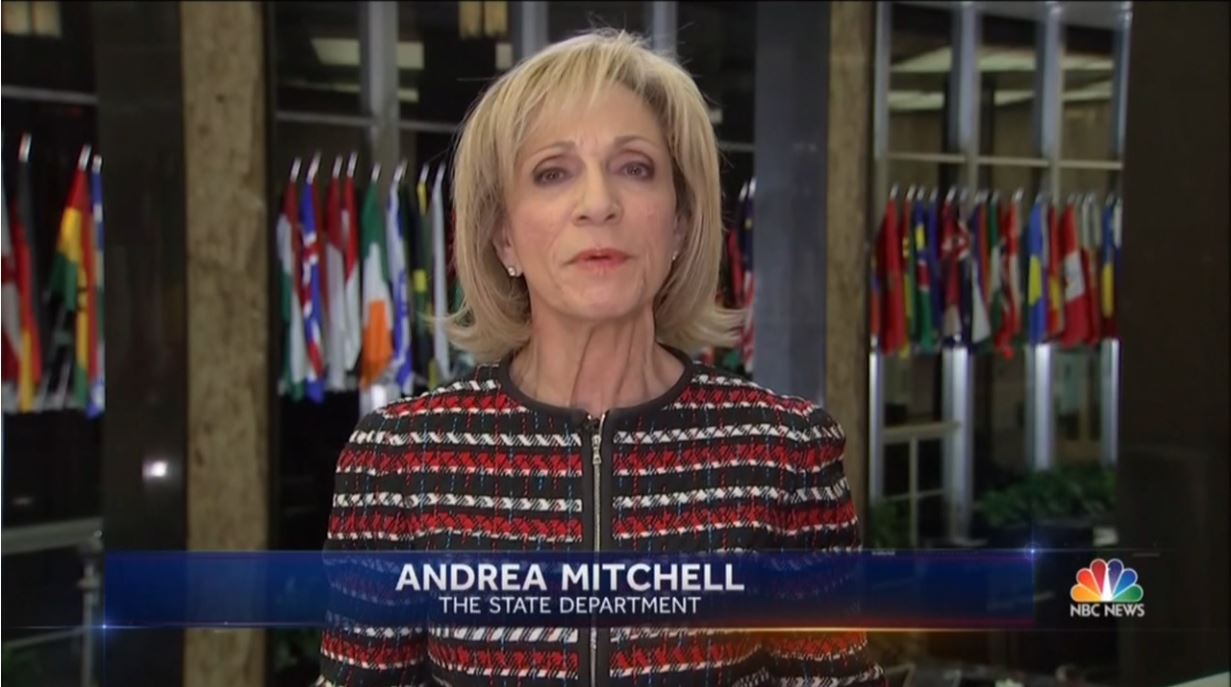 PAUL RYAN: I would be in favor of additional sanctions on Iran. I think the last administration appeased Iran far too much.

MITCHELL: But tonight, it's also the president's conversations with allies grabbing headlines.

MITCHELL: One of those calls with Australia reportedly scolding its prime minister about an Obama agreement to bring 1250 refugees from there to the US. The president calling it a “dumb deal.” Incorrectly labeling the refugees as “illegal immigrants.” Reportedly telling the prime minister he was trying to send America “the next Boston bombers.”

TRUMP: I said why? Why are we doing this? What's the purpose? So, we'll see what happens.

MALCOLM TURNBULL: As far as the nature of the discussion, it was very frank and forthright.

MITCHELL: Australia a stalwart ally fighting alongside US troops in every war since World War I. John McCain calling the Australian ambassador to apologize.

JOHN MCCAIN: I'm concerned about the effect of this difference in issue on the Australian people.

MITCHELL: All of this facing the new secretary of state, his first day on the job.

MITCHELL: Rex Tillerson, no longer the powerful oil executive, now a freshman diplomat confronting challenges on all sides. That flash point in Iran. Russia, where the president wants better relations despite a sharp spike in Russian-sponsored fighting in Ukraine. And even Mexico, where Mr. Trump told the president, “You have a bunch of bad hombres down there.” The White House says he was being light hearted.

JEREMY BASH: No cabinet secretary wants to be in the position of clean up aisle 8. He is going to have his hands full because he has a president that want to be very active on foreign policy.

TILLERSON: I know this was a hotly contested election and we do not all feel the same way about the outcome. But we cannot let our personal convictions overwhelm our ability to work as one team.