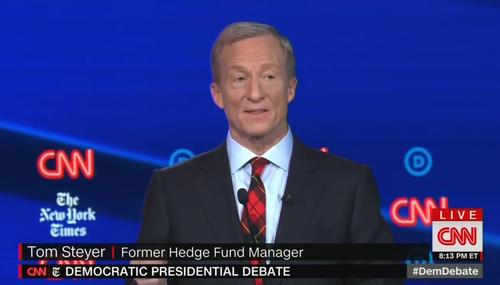 Scott Whitlock
October 15th, 2019 10:33 PM
Did CNN offer an assist to far-left Democratic presidential candidate Tom Steyer on Tuesday? During the presidential debate, a CNN graphic described Steyer with the somewhat toxic description of “former hedge fund manager.” It’s not a popular term. For example, the website Efinancialcareers offered this headline: “Why only the worst people tend to work for new hedge funds.” So, it’s interesting… 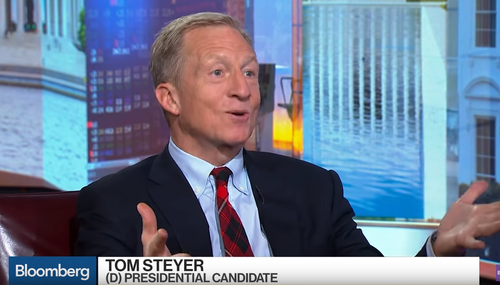 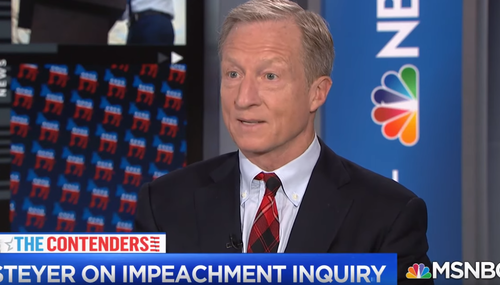 Business
Joseph Vazquez
October 9th, 2019 9:20 AM
Liberal media outlets have promoted liberal billionaire 2020 candidate Tom Steyer as a “patrician populist” who has decried “‘the corporate stranglehold on democracy.’” But Steyer is also currently the top federal spender to outside groups this cycle. According to data from Open Secrets, Steyer is the top federal contributor to outside groups. In total, he contributed $21,063,557 to liberal… 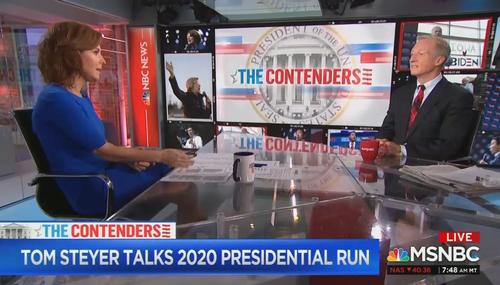 Ruhle to Steyer: 'You and I Both Know' Republicans Are Obstructionists

Alex Christy
October 7th, 2019 10:15 AM
Billionaire businessman Tom Steyer claims he wants to be president. This means if he gets his wish, he will face strong congressional opposition for many of his policy proposals and conniving foreign adversaries. Accordingly  his Monday appearance on MSNBC Live gave host Stephanie Ruhle the opportunity to ask Steyer how he would handle some of these challenges. Instead, Ruhle encouraged Steyer to… 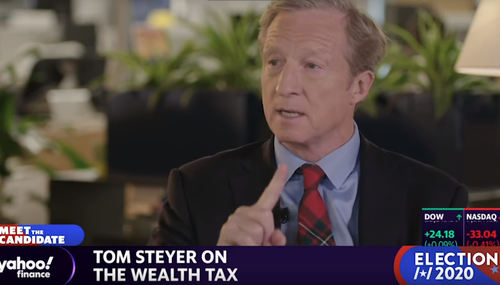 Business
Joseph Vazquez
October 2nd, 2019 3:59 PM
While liberal billionaire and 2020 Democrat candidate Tom Steyer is focused on taking the White House, his group Need to Impeach is looking to further his impeachment agenda. 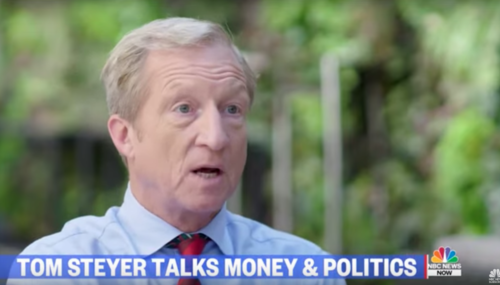 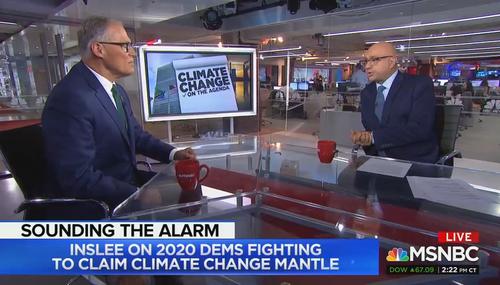 Scott Whitlock
September 23rd, 2019 4:53 PM
MSNBC’s Ali Velshi on Friday and Monday lectured viewers that climate change isn’t a “partisan” issue. Instead, anyone who “breathes” should endorse the efforts to save the planet. This, of course, ignores the multi-trillion price tag for many of the Democratic plans to solve global warming. Talking to former Democratic presidential candidate Jay Inslee on Monday, Velshi insisted, “You have long… 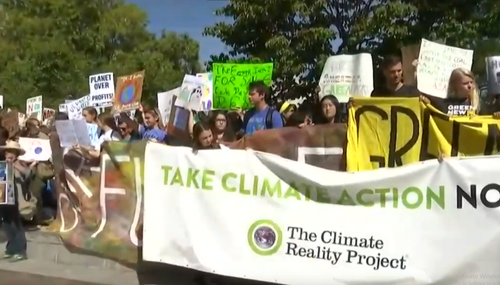 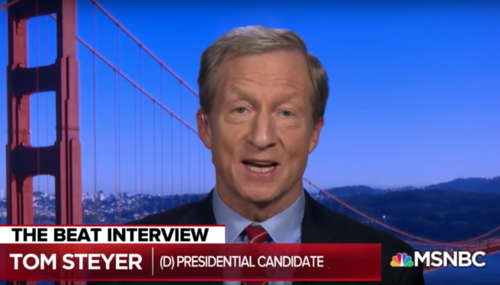 Steyer Claims He Can’t Reveal Hundreds of Millions in Assets

Business
Joseph Vazquez
September 18th, 2019 4:44 PM
So much for transparency. Liberal billionaire Tom Steyer claims he has a commitment to transparency. But the 2020 Democratic presidential candidate told the government he could not disclose hundreds of millions of dollars worth of assets. After his filing with the U.S. Office of Government Ethics, The Daily Beast reporter Lachlan Markay reported that Steyer “declined to go into detail about… 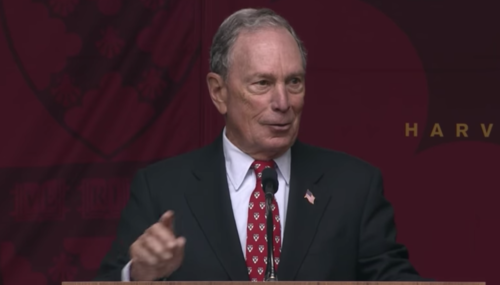 Business
Julia A. Seymour
September 9th, 2019 6:22 PM
Former Mayor Michael Bloomberg and Democratic presidential candidate Tom Steyer are two of the wealthiest anti-fossil fuels crusaders. In June, Bloomberg promised to spend another $500 million eradicating coal and starting to target natural gas power plants too. Yet, USA Today failed to connect the dots between either billionaire and the left-wing groups, including the Rocky Mountain Institute,… 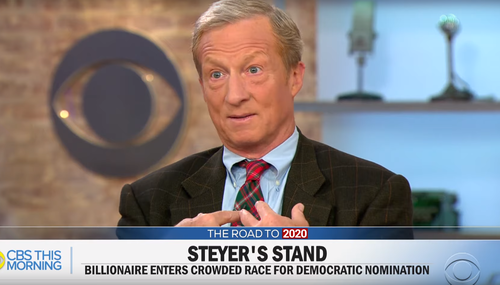 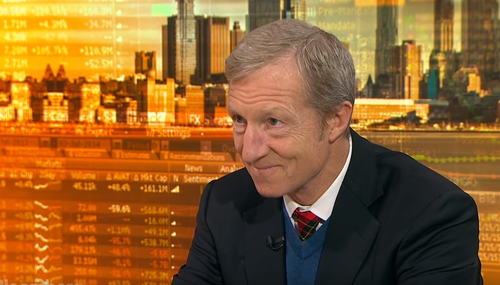 Business
Joseph Vazquez
August 28th, 2019 1:21 PM
A day before the deadline to qualify for the next Democratic debate, The New York Times published a story about liberal billionaire Tom Steyer that boosted his narrative of being an “outsider” and a “populist” seeking reform. The Times original headline supported that narrative by describing Steyer as someone trying to “get money out of politics.” As noted by the Election Law Blog, that headline… 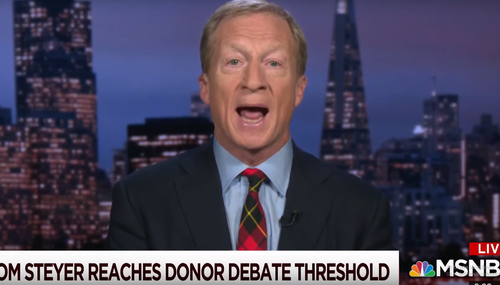 Business
Joseph Vazquez
August 13th, 2019 1:01 PM
Building what The Atlantic once described as the “biggest political machine you’ve never heard of” paid off big for liberal billionaire and Democratic presidential candidate Tom Steyer. He announced early on Aug. 13, that he met the 130,000 donor threshold for the September debates. “Just one more qualifying poll stands between us and that stage!” he added. Each candidate must have 2 percent… 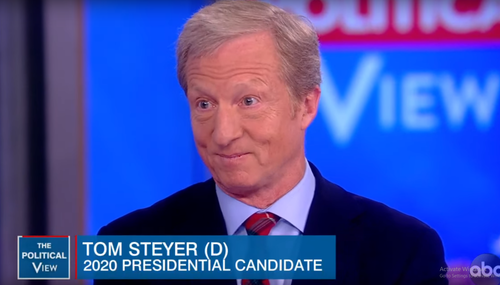 Steyer Cuts Ties with Lefty Center for American Progress Board

Business
Joseph Vazquez
August 12th, 2019 3:42 PM
Liberal billionaire and 2020 Democratic candidate Tom Steyer stepped down from a prominent left-wing think tank last month due to his presidential bid, according to CNBC. Steyer was deeply involved with Center for American Progress for at least 9 years. CNBC reported Steyer was director of CAP’s board since 2010 before resigning July 9. Steyer had been distancing himself from “outside entities…