As the weekend's syndicated Chris Matthews Show concluded, the entire panel chose political figures echoing sentiments either from the left or at least in criticism of conservatives to answer host Matthews's "Big Question" of who has "made a big, gutsy decision so far this year."

Margaret Cho Complains GOP is 'Against Our Rights,' Palin Tries to 'Beat Feminism Down'

Appearing as a panel member on Sunday's Melissa Harris-Perry show, comedienne Margaret Cho wondered why some women are Republicans as she asserted that the GOP is "a party that's so against our rights, our reproductive rights, so many rights in so many ways."

Since Senator Olympia Snowe's (R-Maine) surprising announcement that she won't be seeking reelection in November, the media have been doing a victory lap blaming her decision on the lack of moderate Republicans in Congress.

Yet an op-ed she published in Friday's Washington Post suggests her dissatisfaction with government stemmed from the behavior of Democrats that have controlled the Senate since 2007 (emphasis added throughout):

"The American Conservative Union just came out" with their latest congressional scorecard and what do you know, retiring Sen. Olympia Snowe (R-Maine) has "the lowest lifetime conservative record [48.59, just left of center] of any Republican. In Diane Sawyer's book, that makes her the principled voice of reason," NewsBusters publisher Brent Bozell told Sean Hannity on last night's "Media Mash" segment on Hannity.

The liberal media, of course, have been using the left-leaning senator's departure from the Senate as a club to rebuke the Republican Party as in danger of losing its appeal to moderates and becoming a far-right political party with limited appeal. Also discussed on the popular media bias segment was how the media are skewing their coverage of Rick Santorum to present him as obsessed with social issues and bordering on foisting a "Christian" brand of "Sharia law."

CBS Bemoans Retirement of Senate 'Moderates' Who are Actually Liberals

On Thursday's CBS This Morning, anchor Charlie Rose spotlighted the apparent "the disappearance of political moderates" in Congress in the context of Republican Senator Olympia Snowe's retirement. Correspondent Nancy Cordes gushingly asked Snowe, "Was it just getting too lonely to be a moderate Republican in the Senate?" CBS also listed several "moderate" senators who are actually liberals.

After Cordes gave her report on the Maine senator's retirement, Rose turned to Democratic Senator Claire McCaskill and introduced her as "one of the few moderates left on Capitol Hill." In reality, McCaskill is a solid liberal, given her low rating by the American Conservative Union and her high rating from the left-leaning Americans For Democratic Action.

On Thursday, New York Times reporter Jonathan Weisman fretted over the lack of GOP centrists (a common and long-lasting theme in Timesland) after news broke of the surprise retirement of "fed up" moderate Republican Sen. Olympia Snowe of Maine: “After Many Tough Choices, the Choice to Quit.”

As Weisman tells it, it was the rise of those distracting “social issues” that sent Snowe over the edge:

MSNBC on Wednesday brought on Ed Schultz, a man who once decried Republicans as killers who profit off of "corpses," to lament the decreasing number of moderate, temperate voices in the U.S. Senate.

Host Chris Jansing mournfully discussed Senator Olympia Snowe's retirement and how there is "so much noise on the extremes." Schultz, who once trashed Laura Ingraham as a "right-wing slut," agreed. He said Americans need to focus on these questions: "What kind of candidate or challenger are the Republicans going put up against the [Democratic] opposition? Is it going to be somebody radical?" [See video below. See MP3 audio here.]

On Wednesday's NBC Today, chief White House correspondent Chuck Todd was looking for any excuse to be an Obama spokesman as made this declaration about the announced retirement of Maine Senator Olympia Snowe: "...she's serving as a personal testimonial to the President, who says there's no more centrist coalition inside the Republican Party." [Listen to the audio or watch the video after the jump]

On Tuesday, ABC World News anchor Diane Sawyer praised the liberal GOP legislator as, "The principled voice of reason in some of the most contentious debates in Washington..." and noted how fellow Maine Senator and Republican moderate Susan Collins was "absolutely devastated by this decision."

According to the Washington Post, examining every detail of the relationship between moderate Republican Senators Olympia Snowe and Susan Collins is worth devoting an exhausting 6228 words to. Writer Martha Sherrill offered a fawning analysis of the two senators who often frustrate conservatives.

The near book-length profile investigated the apparent dislike the senators have for each other, but also highlighted the "nuanced" way in which the two side with liberal policies. "But voting with the Democrats has never fazed Snowe, especially after weeks of rumination," readers learn.

Regarding Snowe's decision to vote for acquitting Bill Clinton during impeachment, Sherrill narrated, "This nuanced decision making and openness to Democratic initiatives has fueled a tea party Web site called 'Mainers for Snowe Removal,' which displays a photograph of the smiling senator with her head being scooped up by a giant snow shovel."

Will Journalists Fawn Over Olympia Snowe If She’s No Longer a ‘Rebel Republican?’ 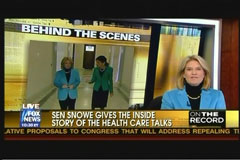 Appearing on Thursday’s edition of On the Record, host Greta Van Susteren asked Snowe if health care was dead. She bluntly replied, "I think that this particular legislation. I think its going to be very difficult to reach an agreement even within, I think, the Democratic caucus in both the House and Senate to accept this legislation one way or the other."

In her "Notebook" video posted at CBSNews.com, Couric read a poem fashioned after Clement Clarke Moore's classic "The Night Before Christmas."

Without any regard for hiding her position on healthcare reform legislation currently before Congress, Couric used the coming holidays as an excuse to wax poetic about her wish that Sen. Olympia Snowe (R-Maine) would "save Harry Reid's Christmas with a deal she brought forth" (video embedded below the fold with poem transcript, h/t Story Balloon, file photo):

George Will Accuses Media of Manufacturing Return of Public Option

George Will on Sunday accused the media of manufacturing the return of government mandated healthcare to the current reform debate.

Discussing the subject on the recent installment of ABC's "This Week," Will said it was highly unlikely Democrats actually have the votes for what they call a "public option," but the media are assisting them in "cleverly and skillfully manufacturing a sense of inevitability that they hope will be self-fulfilling."

In effect, although it is quite doubtful the votes are currently there for any form of government run healthcare, the press are doing their darnedest to change that (video embedded below the fold with partial transcript):