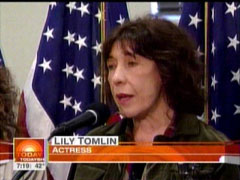 Sometimes you have to laugh at the overwrought emotion that Hollywood celebrities bring to their causes. In a story on Thursday’s Today (in the supposedly hard news 7am half hour), KNBC reporter Robert Kovasic reported on a debate in Los Angeles about whether to spend $40 million to renovate and enlarge the elephant compound at the Los Angeles Zoo, or instead create a 100-acre elephant preserve just outside the city.

MRC’s Geoff Dickens caught this soundbite of actress Lily Tomlin wailing about the plight of the elephant in the zoo: “The word, ‘zoo’ is sort of elephant-speak for Guantanamo. They’re really, they are suffering and being tortured.”

The elephant in question, named "Billy," was shown alternately munching on a leaf, walking near a pond, and sticking his truck over the fence at tourists with cameras — which is, I believe, an existence very similar to terrorists imprisoned at Guantanamo Bay, Cuba.