The PBS broadcast of the Kennedy Center’s Mark Twain Prize on October 30 was a festival of tributes to Ellen DeGeneres – which is fine, since she is quite talented comedically. But it wasn’t so much a tribute for the comedy as it was for her pioneering work promoting homosexuality.

For laughs, consult top producer Cappy McGarr, who insisted Ellen wasn’t picked for political reasons: “The Kennedy Center is apolitical. We have had so many people who have their own brand and type of humor. We don’t pick winners because of any advocacy they do. It is all about funny and a funny life.”

DeGeneres certainly has earned her shelf full of People’s Choice Awards. But in the Obama years, the Twain Prize has shifted unmistakably toward liberal politicking. In 2010, this gang chose 40-year-old Tina Fey for this lifetime-achievement honor, and she laid into conservatives from the stage. "I want to thank everyone involved with the Kennedy Center, or, as it will soon be known, the Tea Party Bowling Alley and Rifle Range.”

Fey was so militantly left-wing that PBS censored (oh the irony) her nastiest stuff. “The success of Sarah Palin and women like her is good for all women -- except, of course, those who will end up, you know, like, paying for their own rape kit and stuff," Fey said. "But for everybody else, it's a win-win -- Unless you're a gay woman who wants to marry your partner of 20 years - whatever. But for most women, the success of conservative women is good for all of us -- unless you believe in evolution.”

In 2012, the same tilt happened. Witness the Latino comedian John Leguizamo. “How about that, people? A gay woman on PBS with public money and the Kennedys, huh? It’s like the Tea Party’s worst nightmare, being chased by a binder full of smart women into an event like this, with a guy like me on stage who looks illegal!” 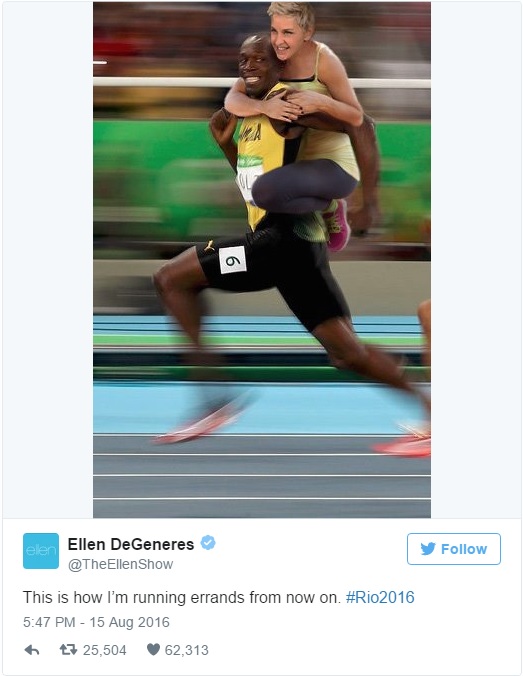 This year’s show was a one-sided tribute to the gay agenda, and like your typical PBS show, no conservative point of view was anywhere in sight. The program’s emcee, Jimmy Kimmel, began:  “In 1998, I mustered the courage to come out of the closet despite the fact that I’m not gay. That’s how inspiring this woman is...She’s one of the most inspiring people I’ve ever met.”

Then came her fellow Hollywood homosexuals. Jane Lynch: “I’m pretty darn sure I could not have the career I have, that I could not live as openly as I’ve lived, if it hadn’t been for you. You really took one for the team back then in the 1990s...you are also a sterling example of how to be a force for compassion, good, and understanding in the world and you are my idol.”

Lily Tomlin picked up on the Mark Twain theme: “Ellen this honor so befits you, so becomes you. Like Huck, you are a folk hero, too. And like Huck, who had the courage to confront the code of convention [racism], rather than betray a friend, you, Ellen, had the same courage to confront convention and not betray yourself or your sense of destiny, and the world would never be the same.”

Jason Mraz picked up his guitar and sang an Ellen tribute song. On PBS, Ellen is a sacred cow. The rapid-fire lyrics included “You got a wingspan spanning the globe,” and “You’re a wise old owl when the cats meow” and “If this were India, then you’d be a sacred cow /And I’d bow down to you, so grateful to the gods for making you.” (Have you ever read more stupid lyrics?)

In accepting the prize, DeGeneres joked “I realize now with all the gay presenters and a lot of you tonight, this could have been on Bravo.” Then she added, “Thanks to everyone at PBS. I am so happy to be a part of your final season.”

On the red carpet for this event, DeGeneres told Politico she was concerned about Romney winning the election.  “If you’re a woman, you should be very, very scared of that, for many reasons,” she said. “And obviously as a gay person he doesn’t believe in me having the same rights, so of course I’m not happy about that.” DeGeneres added that “as a woman who wants to have the choice to do what she wants to do with her own body,” she’s especially concerned about Obama losing.  “I am certainly hoping our president stays put.”

I'm sure that's precisely in line with the "apolitical" poobahs at PBS and the Kennedy Center.