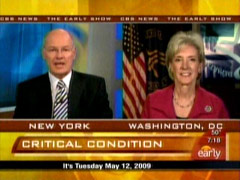 On Tuesday’s CBS Early Show co-host Harry Smith repeated liberal talking points while asking Health and Human Services Secretary Kathleen Sebelius about President Obama’s plan to nationalize the health care system: "People get worried when the idea of somebody messing with their health care comes along, but the fact is, is we spend trillions of dollars on health care every year, and if anything is helping or contributing to killing the economy, it's that cost. Why is it so important that this be dealt with?"

Sebelius easily hit that softball: "It isn't about cutting services. It's about doing smarter, more efficient, better medicine for the American people. Too many Americans now come through the doors of an emergency room. Most expensive, least effective care...And frankly, there's a lot more efficiency we can gain in terms of lowering drug costs, lowering costs across the board without cutting services."

On Friday’s Special Report with Bret Baier, FNC correspondent Molly Henneberg highlighted the controversial decision by Notre Dame to invite the pro-choice President Obama to speak and be awarded an honorary degree. Henneberg filled in viewers on recent remarks by Archbishop Raymond Burke of the Vatican Supreme Court as the Catholic Church official voiced disapproval of Obama’s planned appearance. Henneberg: "He does not think Notre Dame, a Catholic university, should have invited President Obama to give the commencement address on May 17. And he does not think the university should present the pro-choice President with an honorary degree."

As Kathleen Sebelius was sworn in as Secretary of Health and Human Services on April 28, the media continued its biased coverage of her controversial appointment. News outlets ignored the reason GOP senators had delayed her confirmation - her pro-abortion extremism - and focused instead on the importance of having the Secretary in place to combat swine flu.

But the media failed to note that since the creation of The Department of Homeland Security epidemic-fighting efforts are no longer headed up by HHS. Homeland Security is supposed to work with the Center for Disease Control. The CDC is led by Acting Secretary Richard E. Besser since the Obama Administration has yet to nominate anyone for the top job, something the media, with exception of CNN's Ed Henry, haven't reported.

An interview with Former Secretary of HHS Donna Shalala on "Fox and Friends" April 29 asks if having no director at the department had an impact on the swine flu crisis.  Shalala said, "If you remember we transferred the emergency powers for this kind of outbreak to the Department of Homeland Security when it was created. So that power is no longer in HHS. There is no question though that the CDC plays a lead role here and it's very important to get a CDC director as well as the Secretary sworn in."

It was just a question of time. While it was hard to know where it would come from (although MSNBC is always a safe bet), someone was going to make the entire swine flu pandemic a partisan political issue.

MSNBC's Ed Schultz on the April 27 "The ED Show" blamed Republicans on two levels for the swine flu pandemic that some think has been a bit overblown.

"Well, here we go again - Republicans are playing politics with our health," Schultz said. "This kind of stuff just makes my temperature go up. I'm boiling over this - as many as 150 have been killed by this flu in Mexico. Cases are popping up allover the United States."

Kansas City Star editorial page columnist Barb Shelly is miffed.  In today's "The (mis)labeling of Kathleen Sebelius," she explains why:

In other words, this image that's being projected of Sebelius as some radical defender of the abortion industry is very much overstated. She's a pragmatic executive and it's ludicrous that her confirmation process has become so politicized.

I'll say this again: Sebelius is a moderate governor in a state that happens to be home to one of the few doctors willing to perform late-term abortions. Just like many other Kansans, that doctor, George Tiller, has exercised his constitutional right to contribute to political campaigns. Some of his money went to Sebelius.

Shelly doesn't detail how much of Tiller's money went to Sebelius.  Earlier this month, the Associated Press reported that the nominee "got nearly three times as much political money" from the abortionist than she had reported to the Senate Finance Committee.

News editors need to retake Journalism 101 or move to features when stories about the White House dog take precedence over a controversial veto by the President's unconfirmed appointment to Secretary of Health and Human Services.

With the exception of "Special Report with Bret Baier" that night and "Fox and Friends" the morning of April 24, the broadcast media avoided covering the controversial decision. But "Today," "The Early Show," and "Good Morning America" all had time to cover Michelle Obama talking about the first family's new dog Bo the morning of April 24. 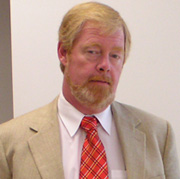 NewsBusters.org Publisher and Media Research Center Founder and President Brent Bozell today - in his private capacity as concerned individual citizen - joined with a list of other conservative luminaries on a letter (in full below the fold) to the members of the United States Senate calling on them to vote down President Barack Obama's nominee for Secretary of Health and Human Services - current Democratic Kansas Governor Kathleen Sebelius.

(Sorry, Sunflower Staters who thought they might soon be rid of her.)

Governor Sebelius began her testimony before the confirmation Committee yesterday.

"President Obama's nominee for health secretary received nearly three times as much political money from a controversial abortion doctor as she had told senators," the Associated Press is reporting, noting that this marks "the second time in her confirmation process" that Gov. Kathleen Sebelius (D-Kansas) "had to explain a financial oversight" to the Senate Finance Committee.

MSNBC's Mika Brzezinski: No One Cares About Tax Problems of Sebelius

On Wednesday's "Morning Joe," MSNBC co-host Mika Brzezinski twice made it very clear that she has no interest in the revelation that Kathleen Sebelius, Barack Obama's nominee for Health and Human Services, is just the latest pick for the President's cabinet to have tax problems. During a news brief in the 6am hour, Brzezinski related the story and that Sebelius just paid over $7000 in back taxes. She then editorialized to her co-hosts, "Around the table, does anyone care?" [Audio available here.]

"Morning Joe" regulars Mike Barnicle and Willie Geist both replied no. Geist then added, "Get over it." Despite expressing how much she didn't care, Brzezinski repeated the story in the 7am hour and also the same stunt. After briefly explaining the particulars, she complained, "Again, around the table, does anyone care?"

A notorious abortion doctor that specializes in grisly late-term procedures is heading to trial at the same time a politician he contributed to and socialized with is awaiting confirmation as President Obama’s Health and Human Services Secretary. Interesting story? Not to the Associated Press.

As a Democratic governor in red-state Kansas, Kathleen Sebelius has vetoed several bills that would modestly restrict abortion. She supports late-term abortion. She's socialized and taken money from well-known abortion extremists, and she has been unofficially ostracized from the Catholic Church for her stance. But you'd have to go out of your way to learn much about that from the news reports that followed the Feb. 28 announcement that Obama planned to nominate her as Secretary of the U.S. Department of Health and Human Services.

This is a position that controls a $700 billion budget and, according to the New York Times, "would have considerable influence over government policy on abortion."

Matthews: Will Sebelius Survive 'Terrorism of the Anti-Abortion People?'

On Monday night's "Hardball," Chris Matthews feared Kansas Governor Kathleen Sebelius, in her nomination fight to head HHS, would be a target of "the terrorism of the, of the anti-abortion people." Then perhaps realizing he called all pro-lifers terrorists, Matthews feebly attempted to amend the statement, as he tried to clarify, "I mean verbal terrorism."[audio excerpt available here]

The following exchange was aired during the March 2, edition of "Hardball":

CHRIS MATTHEWS: Let's talk about, let’s get to something really tough.

MATTHEWS: Kathleen Sebelius, very likeable, very impressive. I think of the woman who becomes the governor in Mr. Holland’s Opus, remember the one who comes back?

MATTHEWS: Who becomes the governor, the woman governor. She looks like her, in fact. Is she gonna get through the, the terrorism of the, of the anti-abortion people?