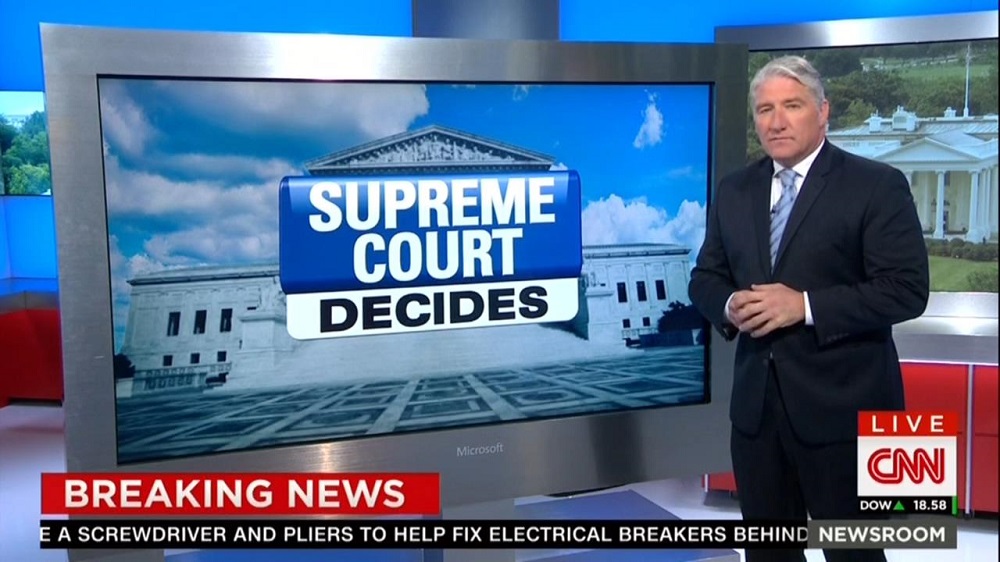 Thursday's CNN Newsroom hyped the Supreme Court's decision that again upheld ObamaCare as a "huge win for the President of the United States," as Wolf Blitzer put it. Gloria Borger and John King tied the Court decision to Congress passing the President's fast-track trade legislation earlier in the week. Borger trumpeted, "You have trade legislation being approved – huge win for the President. You have this reaffirmation of ObamaCare...huge for his legacy." King added, "This may well be the best week of his second term."

Blitzer used his "huge win" label moments before turning to the two CNN personalities, and underlined that Obama "had no plan B. If it would have gone the other way, it would have been a disaster for ObamaCare; for his legacy." Borger repeated the anchor's phrase, and credited Chief Justice John Roberts for preserving the chief executive's legacy:

GLORIA BORGER:  A couple things about his legacy, Wolf: first of all, you have trade legislation being approved – huge win for the President. You have this reaffirmation of ObamaCare – a key component in it, the health care subsidies – huge for his legacy.

You know, we've been talking about this for a long time – about how the President's legacy may not really be determined by John Boehner – but is, in fact, being determined by John Roberts. And I think you saw the John Roberts part of this today. I mean, it was not – it doesn't say to you that John Roberts loves health care reform. What it says to you is they understood that Congress's intent was – was not to throw the health care system into chaos, but rather to provide these subsidies. And, you know, there's a statement here that says that the combination of no tax credits and an infective coverage requirement could well push a state's individual insurance market into a death spiral. It is implausible that Congress meant to do that. So they're just interpreting what Congress meant, but that is what the President has been saying. That's what the President said. This is a huge legacy day for Barack Obama.

King then chimed in with his "best week" contention, and seconded Borger's analysis: "Back from the ashes, he had lost that trade vote. Then, they have a big comeback...with the help of Republicans, the President gets his trade legacy piece of the agenda. And now, this decision, which puts – the cement is about dry – to reaffirm what Senator [Tom] Daschle was saying...the cement is about dry on the legal challenges to ObamaCare." He continued with his own analysis on how the Court decision affects the 2016 presidential race and general election with regard to the Republican Party:

JOHN KING: This may well be the best week of his second term-

KING: In the sense that –  back from the ashes, he had lost that trade vote. Then, they have a big comeback with the help of Republicans – we should make note – with the help of Republicans, the President gets his trade legacy piece of the agenda. And now, this decision, which puts – the cement is about dry – to reaffirm what Senator [Tom] Daschle was saying. Yes, there's another legal challenge, but the cement is about dry on the legal challenges to ObamaCare.

Even the Republican National Committee chairman, Wolf, just issuing a statement saying, 'It is now clear, in the wake of this ruling, that the only way to repeal ObamaCare is through the next presidential election.' And in that context, it relieves some pressure on the Republicans in the short term, because as Dana [Bash] noted, they would have had to have come up with something, so these people didn't lose their subsidies like that. That politically would have been a disaster for Republicans, so they did have a plan to step in. This pressure is relieved on them now, but this will now become a litmus test in 2016 – not just in the presidential race, but in candidates running around the country, too, and that becomes very challenging for the Republicans.

The CNN correspondent also pointed out that the pro-ObamaCare ruling may affect one GOP presidential hopeful in particular:

KING: One other footnote – this may sound a little off the wall – this will become a problem for Jeb Bush, because conservative Republican activists [will] say, your dad gave us David Souter; your brother gave us John Roberts. Mike Huckabee also saying – already saying, this is an act of judicial tyranny. So not just ObamaCare, but Supreme Court picks are going to become an issue now when you go to conservative Iowa, and that becomes interesting for guy a named Bush.

Later, during CNN's live coverage of the Supreme Court's decision, anchor Jake Tapper also congratulated former HHS Secretary Kathleen Sebelius at the end of an interview: "Congratulations, I suppose, are in order on the big victory that was handed to the Obama [administration]."