Health and Human Services Secretary Kathleen Sebelius told CNSNews.com on Wednesday that the administration's new $500 million early learning initiative is designed to deal with children from birth onward to prevent such problems as 5-year olds who "can't sit still" in a kindergarten classroom.

“You really need to look at the range of issues, because if a 5-year-old can’t sit still, it is unlikely that they can do well in a kindergarten class, and it has to be the whole range of issues that go into healthy child development,” Sebelius said during a telephone news conference on Wednesday to announce the Race to the Top Early Learning Challenge.

On Wednesday, the inarguably correct Mark Levin, aided by flashbacks to monologues earlier in the week, laid out in detail the rule of law standoff the Obama administration has created in choosing to defy Monday's federal court decision declaring Obamacare null and void and continuing its implementation as if the ruling doesn't exist.

In the process, he also ripped in to the clear establishment press double standard at work.

Choice excerpts follow (internal links added by me; bolds refer to media-related comments; the rest is important for grasping just how serious this is):

Here's one obvious demonstration of what happens when liberals gave the Food and Drug Administration the power to regulate tobacco: prominent, gruesome warnings of death on boxes of cigarettes. Apparently, mere text saying smoking can be fatal isn't enough “telling truth to power.” New York Times reporter Gardiner Harris celebrated this development on the front page of the Times Thursday. The headline was “U.S. Wants Smoking's Costs to Stare You in the Face.”

Left out of this nanny-state story: the sinking feeling that the FDA could follow San Francisco's war-on-McDonald's example and start putting toe-tag photos (or maybe just obese-kid photos) on Happy Meal boxes. Anthony Hemsley of Commonwealth Brands tobacco gets a brief chance to suggest the graphic warnings add nothing and only serve “to stigmatize smokers and denormalize smoking.” (In other words, "smokers: the new alternative-lifestyle practitioners it's safe to hate.") But Harris and the Times offer a parade of Obama government officials and public-health experts to explain their gruesome graphics campaign:

Sebelius to Insurers: Shut Up Or Else on ObamaCare Increasing Premiums; To AP, It's Mere 'War of Words'

Adopting language and tactics more typical of tyrants, Health and Human Services Secretary Kathleen Sebelius yesterday sent a public letter to the head of a health insurance industry group demanding that carriers stop "falsely blaming premium increases for 2011 on the patient protections in the Affordable Care Act," and that "that there will be zero tolerance for this type of misinformation and unjustified rate increases."

She reinforced her short-term threat with a longer-term one:

We will also keep track of insurers with a record of unjustified rate increases: those plans may be excluded from health insurance Exchanges in 2014. Simply stated, we will not stand idly by as insurers blame their premium hikes and increased profits on the requirement that they provide consumers with basic protections.

When Sebelius threatens exclusion from the "Exchanges," she is really saying: "Shut up and eat your costs, or you'll be out of business in a few years." 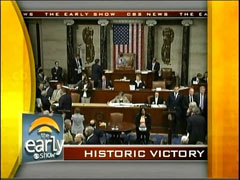 At the top of Monday's CBS Early Show, co-host Harry Smith proclaimed the passage of ObamaCare: "A major victory for President Obama as House Democrats work late into the night to pass health care reform." A headline on screen read: "Historic Victory."

Co-host Maggie Rodriguez later introduced a report on the legislation by remarking that Smith, who was pleased with his NCAA March Madness bracket picks, was "not the only one who's happy this morning. So is President Obama." She went on to declare: "We begin with Congress's historic passage of health care reform late last night." Rodriguez recited ObamaCare talking points: "Now under this law...insurance companies will not be allowed to drop your coverage if you get sick. There will be no cap on lifetime insurance benefits and you can keep your children on your health insurance through the age of 26. Also, coverage will be available for uninsured Americans with pre-existing conditions."

In the report that followed, correspondent Nancy Cordes began by describing the "sense of relief for Democrats," in the wake of the bill's passage. The on-screen headline read: "Historic Vote; Health Care Reform Passes; Heads to Obama's Desk."

At the top of the show, co-host Harry Smith had similarly declared: "President Obama says the health care debate is over. He wants a reform bill on his desk in the next few weeks." A Headline on screen read: "Health Care Fast-Track."

White House correspondent Bill Plante reported on the so-called "fast-track" plan: "The President yesterday rejected Republican calls to start over, saying that it is time to make a decision on health care....he made it clear that he's willing to get this done with a legislative maneuver requiring no Republican support." At the end of his report, Plante acknowledged things weren't quite so simple: "this is by no means a done deal....Republicans united in opposition, Democrats wavering because of elections this fall."

Good Morning America's George Stephanopoulos on Thursday put the responsibility for passing health care on the shoulders of the pro-life Bart Stupak, worrying that the Congressman is "now threatening a mutiny over the issue of abortion." The GMA host interviewed Stupak and pressed him three times on voting for the legislation. [Audio available here.]

At one point, he solemnly queried, "If the President doesn't change the language, if your language is not accepted, you and your 11 colleagues who voted yes the last time will vote no this time. Does that mean you're prepared to take responsibility for bringing down this whole bill?"

Notice that Stephanopoulos placed the obligation on Stupak and not on pro-abortion Democrats who, one could argue, are more concerned with that issue than with passing health care. Earlier in the segment, the ABC journalist grilled, "So, if the President doesn't change the Senate bill, you can't vote for it?"

By Mark Finkelstein | March 4, 2010 11:22 AM EST
Someone submit the Morning Joe java to Henry Waxman for analysis.  There seems to be something in it causing top Dems to experience serious delusions . . .

On today's show, HHS Secretary Kathleen Sebelius claimed that the people of her home state of Kansas are "wildly supportive" of the substance of ObamaCare.  Unfortunately, suggested Sebelius, they're just too ignorant to know what's in the blessed bill.

To Morning Joe's credit, the patronage deals and the Charlie Rangel situation were discussed throughout the show.  The withdrawal of Dem Rep. Eric Massa from his re-election race, amidst allegations he sexually harrassed a male staffer, was also discussed, though not raised with Kaine.  Would an RNC Chairman appearing on the show the day after the Mark Foley affair erupted have gotten a similar pass?

By Matthew Balan | February 25, 2010 4:24 PM EST
CNN chief medical correspondent Dr. Sanja Gupta pressed HHS Secretary Kathleen for price controls in all parts of the health care industry on Thursday's Newsroom. Gupta stated that insurance companies were "just the tip of the iceberg" of health care costs: "There are a lot of different organizations, groups, people who contribute to health care costs. Are you going to be going after all these folks?" [audio clip available here]

It looked a bit odd for CNN to choose the correspondent, whom Obama chose to be surgeon general before adviser Tom Daschle was forced to resign, to interview other people who signed up to sell ObamaCare. Gupta's question came during an interview 26 minutes into the 9 am Eastern hour, in which both he and CNN anchor Kyra Phillips asked the Obama administration official about the health care summit later in the day at Blair House. Gupta also hinted at the possibility of going after the profits of health care suppliers in his last question to Sebelius (who was sympathetic to Gupta's proposal in her answer):

On Mammogram Guidelines, No Fact Checks for Sebelius or Durbin

This panel was appointed by the prior administration, by former President George Bush, and given the charge to routinely look at a whole host of services to make sure that new preventive services which had benefit were being looked at by health care providers and that things that they felt did not have as much benefit as we move forward were also looked at by health care providers.

“The recommendation by this medical panel has been rejected by virtually everyone, including the current administration,” Durbin said. “They were appointed by President Bush.”

As outrage builds concerning the Department of Health and Human Services' gag order preventing private health insurance companies from communicating to their Medicare Advantage customers how pending legislation could impact them, a July 1997 letter from the Director of the HHS's Center for Health Plans and Providers claimed such an edict "would violate basic freedom of speech and other constitutional rights of the Medicare beneficiary as a citizen."

As the Media Research Center's Brent Bozell on Thursday demanded news outlets investigate this gag order or appear as if "they approve of government censorship," one can hope this July 1997 correspondence from Bruce Merlin Fried will become a pivotal piece of the puzzle.

Such seems especially important as Fried was the Chief Coordinator of the 1992 Clinton/Gore Campaign's Health Care Advisory Group, and later was a member of the President's Transition Health Policy Team.

With that as pretext, here's the money section of his July 10, 1997, letter to Wendy Krasner of the law firm McDermott, Will & Emery:

Did someone make this "Declare Your Devotion To a Dem Day" at MSNBC?  You have to wonder.  During the network's noon hour, Dr. Nancy Snyderman declared herself a "big fan" of HHS Secretary Kathleen Sebelius.

Not to be outdone, during the following hour Andrea Mitchell ended her interview with Sen. Tom Harkin (D-Ia.) by thanking him profusely—and I mean at length—for having pushed through passage of the Americans With Disabilities Act 19 years ago today.