On Tuesday's NBC Nightly News, anchor Brian Williams fretted: "There's still enough congressional gridlock to go around....One thing that did not get resolved today, a stalemate over the Federal Aviation Administration budget. And partisan bickering on this one is costing real Americans, tens of thousands of workers, costing them their paychecks."

Correspondent Lisa Myers quickly found who to blame for the deadlock: "The partisan bickering centers on the insistence of House Republicans that any bill to keep the FAA operating also curb costly subsidies for flights to and from 13 rural airports, some in the states of powerful Democrats."

At the top of Monday's NBC Today, co-host Matt Lauer touted objections to the indictment of former Democratic Senator John Edwards: "Some critics blast the government's case against the former presidential candidate. Why they say what he did may not have been against the law."

Introducing a later report on the scandal, fellow co-host Meredith Vieira similarly proclaimed: "There are growing questions over the indictment of former presidential candidate John Edwards for allegedly using campaign funds to hide an affair. Did the government overreach?" The headline that appeared on screen read: "Bad Guy or Bad Case?; Legal Experts Question Indictment of John Edwards."

'The Blingriches': NBC Continues to Hit Gingrich and Wife Over Tiffany's Jewelry Debt

On Thursday's NBC Today, senior investigative correspondent Lisa Myers kept up the attack on Republican presidential candidate Newt Gingrich for having a line of credit with the jeweler Tiffany's five years ago: "Gingrich has always described himself as frugal and fiscally conservative, which is why this story about a huge line of credit at Tiffany's just won't go away."

Myers touted the story as great fodder for late night comics, who "have had a field day," and remarked that Gingrich "and his wife, Calista, have been dubbed the 'Blingriches.'" She noted how "The questions just keep on coming," playing a clip of Gingrich being grilled by CBS host Bob Schieffer on Sunday's Face the Nation.

The network morning shows on Wednesday all avoided party labels for Democrat John Edwards in the wake of the announcement that the former presidential candidate will be indicted by the Justice Department. In February, however, the same programs could not wait to highlight a disgraced conservative and tout his party ID.

As a potential government shutdown looms the liberal media are filling their programs with stories about dire consequences of deep cuts that will lead to troops not getting paid, closed national parks, and late tax refunds. However, a review of MRC's coverage of the 1995 budget fight reveals the media are simply rerunning their tired old arguments from the last shutdown.

On this Wednesday's edition of ABC's Good Morning America, Jonathan Karl tallied the services that could be at risk this time around, as he warned: "If they don't reach a deal and get it passed by then, American troops, including those on the front lines in Afghanistan and Iraq, may not get their paychecks. And smack in the middle of tax season, that refund you've been counting on, well, you may have to wait." Karl went on to alert travelers that: "Treasures like Old Faithful and Yellowstone, Mount Rushmore, Yosemite's half dome, will be closed to visitors. And if you don't already have a passport, don't even think about leaving the country. Last time the government shut down, 200,000 passport applications were stopped in their tracks."

However Karl and others, as quotes from 1995 show, are simply dusting off the old media playbook to blame Republicans, not Democrats, for a shutdown, as they focus on high profile federal projects like national parks in an attempt to frighten the American people into opposing prudent fiscal decision-making.

(videos after the jump)

The liberally-biased mainstream media didn't let a catastrophe go to waste, using the Japanese tsunami as an opportunity to suggest, falsely, that Republicans would like to cut the budget for NOAA in such a way that would threaten the Pacific tsunami warning system.

Demonstrating how the mainstream media are an obstacle to any efforts to make any cuts to any federal spending, NBC and ABC on Wednesday night resorted to citing Sesame Street characters as potential “casualties in a war over culture and spending cuts,” without any regard for how the Children’s Television Workshop is a huge generator of revenue from corporate donations and product sales, as NBC’s Lisa Myers went so far as to exploit the kids of the nation:

With American children already falling behind, public broadcasting supporters fear Bert and Ernie could become a casualty of the political wars.

With House conservatives hoping to eliminate funding to the Corporation for Public Broadcasting, which funds PBS and NPR stations and production projects, Myers warned: “Officials say some stations would go under. Also at risk, programming like Sesame Street.”

Flashback to 1994: Brokaw Declared Contract with America 'Long on Promises, But Short on Sound Premises'

By Brent Baker | September 23, 2010 2:14 AM EDT
With House Republicans set today (Thursday) to unveil their “Pledge to America” if they win a majority of seats in November, a look back at how then-NBC Nightly News anchor Tom Brokaw derided the Contract with America when it was announced on Tuesday, September 27, 1994. “Today,” Brokaw declared on the newscast he anchored from in front of the White House, “GOP congressional candidates were summoned to Washington and given a battle plan. However, as NBC's Lisa Myers tells us tonight, it is long on promises, but short on sound premises.”

In the subsequent story, Myers cited the GOP's promise of “tax cuts for just about everyone” while also pledging “more money for defense and a balanced budget amendment.” She countered: “An independent budget expert called it standard political bunk.” Myers also poked at term limits, noting Newt Gingrich “already has served 16 years...Gingrich said any term limit bill will apply only to future members of Congress.” She mused in concluding her piece: “And politicians wonder why voters are cynical.”

Video clip, from the MRC's videotape archive, is of Brokaw's introduction followed by the entire story from Myers. Audio: MP3 clip. Extra treat: The video begins with a Today show promo narrated by Katie Couric: “The latest on the OJ Simpson case. Can celebrities get a fair trial?”

NBC's "Today" gave backhanded praise to Bank of America (BofA) on March 11 because of its decision to stop charging overdraft fees for debit-card transactions.

"This is clearly an effort by Bank of America to repair its battered image," senior investigative correspondent Lisa Myers said. "But it's also a meaningful step that will save consumers money and keep families from spending more than they have."

The NBC report maintained the media theme that such fees are "abusive" by including Leslie Parrish of the Center for Responsible Lending (CRL) who said, "We highly commend Bank of America for getting rid of this abusive practice." CRL is a liberal group funded by far-left wingers like George Soros and Herb and Marion Sandler, according to ActivistCash.

While Myers acknowledged that BofA was "getting ahead" of "new federal rules," she didn't warn viewers about the negative implications of that legislation.

By Brent Baker | February 17, 2010 10:08 PM EST
On the one-year anniversary of the Obama administration's “stimulus” spending bill, ABC, CBS and NBC all eagerly corroborated the White House's claims about how it “saved or created” many jobs and staved off economic disaster, though they all offered a range of numbers and definitions (ABC: “800,000 to 2.4 million new jobs,” CBS: “about 1.8 million” jobs “saved or created” and NBC: “1.6 to 1.8 million jobs have been created so far.”)

ABC and CBS touted anecdotes about companies and government agencies which asserted the spending had prevented layoffs or allowed them to hire new staff. ABC's Jake Tapper cited buses for Santa Monica, construction jobs in Baltimore, “63,000 green jobs” (with a solar panel-maker's CEO declaring “it is working and we're proof of that”) and a school system superintendent who told Tapper the funding “ helped save 61 jobs and create 73 new ones.”

On CBS, Chip Reid began with how “this highway paving equipment company in California canceled plans to lay off 40 workers because of demand created by stimulus projects,” before trumpeting how “in Washington, D.C. about 20 people are working on this road project” where “manager Matthew Johns calls the stimulus a lifesaver.” [audio available here]

Though “many independent economists put the number of jobs saved or created at about 1.8 million,” Reid relayed that “to the great frustration of the White House, most Americans simply refuse to believe it. In a recent CBS News/New York Times poll, a mere 6 percent said the stimulus has created jobs.” Reid's culprit: “That skepticism due in part to a relentless campaign by Republicans who say the stimulus is a bloated, big-government failure.” (The online “Political Hotsheet” echoed Reid's theme: “On Stimulus, Perception Doesn't Match Reality.”) 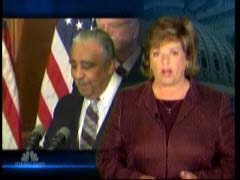 Wednesday’s NBC Nightly News aired a full report by correspondent Lisa Myers on the ongoing investigation into Democratic Congressman Charles Rangel’s failure to report income over several years to the IRS. Myers detailed some of the numbers:

The powerful chairman of the House Ways and Means Committee recently revised six years of financial disclosure statements, revealing more than $600,000 in previously unreported assets and tens of thousands of dollars in unreported income. Among the holdings Rangel failed to report, an investment account and a checking account, each worth at least $250,000. Rangel also has admitted that he failed to report and pay taxes on $75,000 in rental income on this villa in the Dominican Republic.

CBS and NBC Finally Catch Up to ACORN Scandal; Express Sympathy for the Left-Wing Group 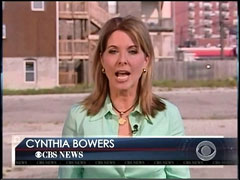 In the first story on CBS since the scandal broke last week, on Tuesday’s Evening News, anchor Katie Couric reported: "The grassroots community organization called ACORN helps low-income Americans find affordable housing and gets tens of millions of dollars in government funding. But as Cynthia Bowers reports, that may be coming to an end after a scandal caught on tape."

After showing undercover video of ACORN workers across the country advising filmmakers James O’Keefe and Hannah Giles, who posed as a pimp and prostitute, on how to run an underage prostitution ring, Bowers explained: "ACORN says the workers caught on tape were fired but contends the videos were illegally obtained, doctored and deceptive, and is threatening legal action against the undercover filmmakers posing as the couple...No matter who’s to blame, long-term damage to the reputation of the poverty rights organization may already be done." The CBS story failed to identify ACORN as a liberal organization.

NBC did not get to the ACORN story on Tuesday’s Nightly News, but did cover the scandal on Wednesday’s Today, with co-host Meredith Vieira reporting: "And now to the scandal involving the community organizing group known as ACORN. Over the years, it has received tens of millions of dollars in federal housing money, but now hidden camera videos have led to the U.S. Senate voting to cut off funds to the group."