The morning after appearing with NewsBusters senior editor Tim Graham at the National Press Club (pictures and audio from that event posted below) to discuss the media's lack of interest in Hillary Clinton's role in Clinton administration scandals, MRC president and NewsBusters publisher Brent Bozell appeared on the January 11 "Fox & Friends" to discuss NBC's gauzy treatment of Barack Obama.

On his blog The Daily Nightly, NBC Nightly News anchor Brian Williams took offense at "spinning" about his Obama-swooning patter on MSNBC about how reporter Lee Cowan admitted they've found it hard to remain objective about the Obama phenomenon. NBC, biased? Williams said "rival political efforts" (the Clintons?) charged him with bias and that's "just ridiculous." The anchor demanded viewers look at NBC against and judge the "quality and fairness of our journalism." But isn't that a little like Gary Hart challenging reporters to look for Donna Rice? Exhibits of Cowan's liberal bias on the campaign (not to mention NBC's) have been posted here at NB. From the anchor's blog:

Lee admits "...it's almost hard to remain objective..." which as he implies is our goal in our work every day. He's referring to what all of us who have covered campaigns have felt from time to time: it's impossible to get the long view...the view from 40,000 feet...while operating at sea level, and inside the bubble.

Lee was talking about the swirl of excitement that has hit the Obama campaign after Iowa -- the crowds, the hoopla -- all of it. Today we learned that rival political efforts were spinning this as some kind of "bias" on the part of either Lee, or me, or this News Division, and that's just ridiculous. My response is as it always is in these situations: look at it again, listen to what's being said, and judge us by the quality and fairness of our journalism.

Were it not for the leftward-leaning news media, Democrats would have a much tougher time getting their agenda out. This is a point which journalists now and then will admit. Another such admission was made earlier today by NBC anchor Brian Williams who said the following:

I interviewed Lee Cowan, our reporter who covers Obama, while we were out yesterday and posted the interview on the web. Lee says it's hard to stay objective covering this guy. Courageous for Lee to say, to be honest.

CBS Sees GOP 'Mudslinging,' Not 'Playing As Nice' As Dems 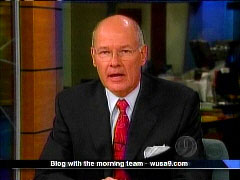 On Monday's "The Early Show," CBS anchor Harry Smith charged that the leading Republican presidential candidates are "mudslinging," contending that their campaigns have "turned nasty," but then suggested that Democrats are "playing nice." While the ABC and NBC morning shows portrayed candidates in both parties as "going negative," CBS's Smith hinted that Democrats were "playing nice" even after CBS corres

Holt To Huck: Wish You Had a 'Do-over' on Pakistan Comments?

Could it have been just a couple days ago that Chris Matthews claimed that the media had made a "mascot" out of Mike Huckabee? You wouldn't know it from this morning's Today show.

Weekend host Lester Holt kicked off the show's political segment by implying that among presidential candidates, Huckabee was the big loser in his handling of the Pakistani situation.

LESTER HOLT: The murder of Benazir Bhutto is having a big impact on the presidential race here in this country, where we now stand just five days from the first contest, in Iowa, and it's forcing Republican Mike Huckabee to do a bit of backtracking.

See Update at foot: "I wasn't teasing: don't get in my way."

If at the end of a hunt and while still in the field a politician disfavored by the MSM had joked about shooting his opponent, do you think it would have made big news? But how much coverage have you seen of just such a statement Mike Huckabee made during his recent Iowa pheasant photo-op hunt?

You've probably seen footage of Huckabee joking about shooting people who won't vote for him. Morning Joe played the clip in its opening segment today. Huckabee points to three dead birds on the ground.

By Paul Detrick | December 4, 2007 12:44 PM EST
The Robin Williams movie "R.V." may be obnoxious but it was nothing compared to an "NBC Nightly News" story last night.

Tailgating the New York Times, "Nightly News" worried on December 3 that America is traveling down the road to recession, because R.V. sales are projected to decline by about 5 percent in 2008.

Without a peg to anything in the news, NBC decided Monday night to base a story on a four-year-old contention by a professor that the middle class is worse off now than in the 1970s, followed by a piece promoting Warren Buffett's claim the rich don't pay enough in taxes. In fact, the federal income tax system remains quite progressive. “Not fair,” Brian Williams teased with matching text on screen, “one of the world's richest men tells Tom Brokaw the taxes he pays aren't fair, meaning: Why is his tax rate so low?” Williams later praised Buffett's “brave campaign,” but first he introduced a story on how “the gap between the super-rich and everybody else in this country seems to be growing. The middle class is caught in a kind of financial squeeze.” Reporter Lee Cowan featured the claims of Harvard law professor Elizabeth Warren, a Huffington Post blogger who wrote a 2003 book about middle class families going broke. She declared: “Today's two-income family actually has less cash to spend than their one-income parents had a generation ago.” Cowan ominously concluded: “A generation ago, the middle class was comfortable. These days, they're comfortable but scared, living on a wing and a prayer.”

Next, Brokaw touted Buffett: “It is well known that Warren Buffett is a contrary billionaire. Unlike most of his fellow billionaires, he believes that they should be paying a higher tax rate Buffett sees a fundamental injustice that he says touches all Americans.” Buffett insisted: “The taxation system has tilted toward the rich and away from the middle class in the last ten years.” Brokaw cued him up: “In your own office...you pay a much lower tax rate with all of your wealth than, say, a receptionist does.”

NBC Plays Up Hillary's Chicago 'Home,' Even Her Ersatz Cub-Fandom

As NBC’s Today reported from Chicago on Monday, they went a little overboard in playing up Hillary’s Chicago credentials – especially her Chicago Cub fan credentials. It’s a little odd for NBC to tout her as a Cub fan just a few weeks after NBC’s Tim Russert asked her in a September 26 debate who she would root for in a potential Cubs-Yankees World Series and she straddled: "I would probably have to alternate sides." The Russert exchange was omitted from the gooey story oozing that "Not since Abraham Lincoln debated Stephen Douglas have two Illinois homegrowns drawn so much attention."

Matt Lauer welcomed viewers to Chicago and strangely and inaccurately claimed Hillary is "these days" claiming Chicago as her home: "Welcome to a split edition of our show on this Monday morning from New York and Chicago. Of course they call this place the Windy City but it's not because of the weather, it's because some long-winded politicians. And these days two very prominent politicians are calling this place home, Barack Obama and Hillary Clinton. And that's made for some tough choices among the locals. NBC's Lee Cowan joins us now to find out if either of these people has a home-field advantage. Lee, good morning to you."

Got Money Worries? If Not, NBC Can Help 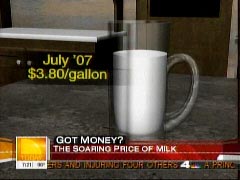 Gas prices have been going down, nearly 24 cents since this time last year and 29 cents since last month. So NBC had to find another liquid to condemn. Meredith Vieira said on the August 14 “Today” show that “your wallet is getting sucked dry” by milk prices. 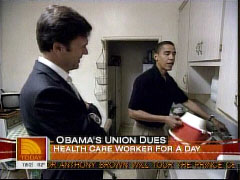 On this morning's "Today" show it was a tale of two candidates who have fallen behind in the polls. One was eulogized and left for dead, the other one was glowingly profiled. Can you guess which one was a Democrat and which one was the Republican?