On Saturday, the major broadcast networks dedicated airtime to the liberal Tax Day protests against President Trump as one network aired a crowd chanting “lock him up,” another refused to acknowledge the anti-Trump violence in California, and all of them declined to label the demonstrations.

This coverage of April 15 protests by liberals stood in stark contrast to how ABC, CBS, and NBC dismissed and smeared the Tea Party-led Tax Day events on this date eight years ago.

CBS Weekend News did not give the leftists their own segment, but shamefully ignored the violence in Berkeley, California.

Barnett touched on the First Family joining the President in Florida and the Afghanistan missile strike before hyping that “with a nuclear-armed North Korea saying it is ready to go to war with the U.S., the Trump administration wants to show strength to the world while facing resistance at home.”

As if he were reading their talking points, Barnett teed up a soundbite from one protester by stating: “Protesters want the President to finally release his tax returns and stop using taxpayer money on travel.”

“Based on a report by the Government Accountability Office, CBS News estimates presidential trips to Mar-a-Lago cost at least $3 million, and CBS News has also learned the Secret Service has spent $190,000 so far to travel with and protect the elder Trump sons on their overseas business trips,” he concluded, in part.

Over on ABC’s World News Tonight, weekend anchor Tom Llamas tossed to correspondent David Wright by first acknowledging the “violent clashes” before reporting how “there were about 150 Tax Day protests demanding to see the President's tax returns, even at the President's Mar-a-Lago resort.”

Wright covered the Berkeley violence, but the most intriguing portion of his report was how he allowed a soundbite from one group of protesters repeatedly chanting, “lock him up.” Of course, this went unchallenged in contrast to the media hysteria with “lock her up” during the campaign concerning Hillary Clinton.

The ABC reporter dedicated a clip to a Trump supporter defending him, but he was outnumbered by four anti-Trump ones. 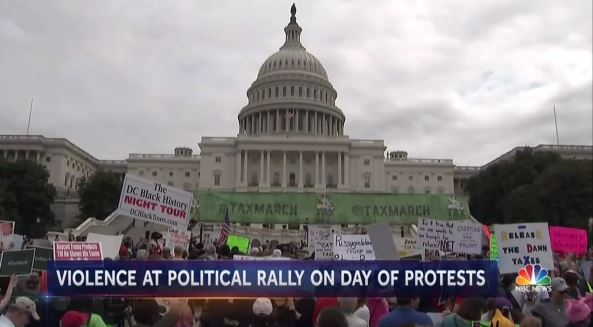 On what's typically Tax Day in this country, tens of thousands took to the streets to protest and call on President Trump to release his tax returns. March organizers say more than 180 events were planned in cities across the country. For the most part, they were peaceful, but brawls like this one did break out at a rally – a big rally called by Trump supporters in California. Clashes, sometimes violent, led to more than a dozen arrests.

Correspondent Catie Beck led off with Berkeley, fretting that “[w]hat was supposed to be a peaceful protest turned violent in Berkeley, California” as “[c]lashes between hundreds of anti- and pro-Trump supporters, spill[ed] into the streets.”

“Fist fights breaking out, reports of people tossing fireworks into the crowd, and flags being burned. Today was billed as a peaceful Patriots Day rally that ended with injuries and police officers in riot gear arresting at least 13 people,” she added.

Like ABC did, NBC aired a January clip of Kellyanne Conway stating that Trump won’t release his taxes because “[w]e litigated this all through the election” and “[p]eople didn’t care.”

That idea that people didn't care is what sparked this national response....From the nation's capital to Chicago and Atlanta, the message about transparency was clear. Some protesters taking their case directly to the Commander-in-Chief, marching just across the water from Mar-a-Lago.

This brings us back to 2009 and what my colleague Brent Baker chronicled when the Tea Party came into its own with peaceful protests across the country. Published in the early hours of April 16, here’s Baker’s lede:

The broadcast network evening newscasts on Wednesday provided prominent coverage of the “Tea Party” rallies across the nation with time for the views of participants, but they tried to discredit the protests as a front for “corporate interests” or a “fistful of rightward leaning Web sites” -- a concern for motives and hidden agendas the same programs lacked when championing the 2006 pro-illegal immigrant marches. All three also cited polls to undermine the premise the public shares the concerns on taxes and spending espoused by the “tea party” protesters.

While 2017's networks suggested there was little to no coordination and never once labeled the protesters as liberal or progressive, CBS correspondent Dean Reynolds made sure to smear the efforts by conservatives in 2009 as directed and influenced by “a fistful of rightward leaning Web sites and commentators embraced the cause.”

2009's CBS also provided more contrast as Reynolds hilariously claimed “it's important to keep in mind that fresh polling indicates there is not all that much passion about high taxes in the country at large right now. Gallup this week found 61 percent of Americans see their federal income taxes as fair.”

On NBC, Lee Cowan reported that “organizers insist today's 'tea parties' were organic uprisings of like-minded taxpayers from both parties,” but “some observers suggest not all of it was as home-grown as it may seem.” Those “some observers” turned out to be one observer, NBC News White House reporter Chuck Todd: “A lot of the sentiment is about organizing anti-Obama rallies, getting conservatives excited about the conservative movement again.”

Turning to public sentiment, Cowan maintained: “Although today's organizers called this national day of protest a success, polls still show that a slim majority of Americans actually approve of the bailout plan. What they disagree with is where the money should go.”

Now a Good Morning America weekend co-host, Dan Harris was a correspondent for ABC’s World News in 2009 and claimed that the Tea Party Tax Day events weren’t conceived by the people but instead “Fox News and talk radio.” He also reported:

But critics on the left say this is not a real grassroots phenomenon at all, that it's actually largely orchestrated by people fronting for corporate interests...while the Boston Tea Party in 1773 was about taxation without representation, critics point out that today's protesters did get to vote — they just lost. What's more, polls show most Americans don't feel overtaxed.