Turn the page, and one could read John Schwartz's story about the latest wrinkle in the bribery and corruption case of former Alabama Gov. Don Siegelman. But in this case, Schwartz made the partisan lines clear, quickly identifying convicted governor Siegelman as a Democrat and his prosecutor as a Republican, heightening the contrast and reinforcing the paper's long-standing, unfounded suspicions of a high-level anti-Siegelman conspiracy on the part of the GOP.

A Department of Justice whistle-blower who accused prosecutors of misconduct in the closely watched federal corruption trial of former Gov. Donald E. Siegelman of Alabama has been fired, and claims retaliation is the reason. The government denies that it was retaliating.

The whistle-blower, Tamarah T. Grimes, worked as a legal aide with the team prosecuting Mr. Siegelman and Richard M. Scrushy, the former chairman of HealthSouth, on bribery and corruption charges.

Both men were convicted in 2006 in a case that Mr. Siegelman, a Democrat, and supporters say was politically motivated.

Finally, Someone In The Establishment Press Calls Out Obama's 'Created and Saved' Jobs Baloney

(I know; it almost doesn't count, because it's in the lefty-despised Wall Street Journal Opinion section.)

As yours truly noted a month after the presidential election (at NewsBusters; at BizzyBlog), Barack Obama's handlers and his teleprompter began telling the president-elect to begin using variations on the term "create and/or save" in speeches about jobs and the economy within days of his electoral victory. During the campaign, I found no example of where Obama used any variation on that phrase; it was always "we will create X number of jobs."

Until now, no one in the press of note has paid any attention to this "clever" abandonment of logic and accountability. After all, by the new "create and/or save" non-logic, Dear Leader has "saved" over 130 million jobs since his inauguration -- even though, on a seasonally adjusted basis, almost 2.2 million Americans lost theirs from February through May:

Finally, someone in the establishment media has done a serious call-out of Team Obama's risible ruse. Here are excerpts from William McGurn's hard-hitting column in today's Wall Street Journal:

CBS Anchor on Pelosi: 'Is This Over?'; ABC Hails Obama's 'Masterstroke' on Huntsman

A night after the CBS Evening News ignored CIA Director Leon Panetta's rebuke of House Speaker Nancy Pelosi, Saturday's newscast continued the blackout as anchor Jeff Glor only mentioned Pelosi in setting up a question by explaining she “put herself in a very awkward position” when “she said the CIA lied to her or misled her about water-boarding,” before he asked Time magazine veteran John Dickerson: “Is this something that's over for the Speaker now or does this continue?”

Though the whole topic is apparently already over for CBS News, Dickerson maintained “it's not over for the Speaker” as he proceeded to empathize with her plight by suggesting she's “got to hope another issue...blows her off the front pages” and that “when Congress goes home for their recesses that somehow she gets out of the news cycle because she's still in a fix.” But not one that interests CBS News.

Nor NBC, which like ABC on Saturday night, didn't utter Pelosi's name – possibly because all three evening newscasts were so exited about what they made their lead stories: President Obama naming Utah's Republican Governor, Jon Huntsman, ambassador to China. “A political masterstroke” declared ABC's George Stephanopoulos on World News in repeating the same phrase applied moments earlier by reporter Jonathan Karl. Stephanopoulos even managed to get in a dig at conservatives as he hailed the pick as “one more sign that this is a party [Republican] where the reformers -- the moderates -- are looking for an exit.”

What a difference a radical, in your face, abortion-promoting president makes.

Pro-lifers can savor this graphic for a few minutes before returning to the trenches to work on persuading what Gallup says is, for the first since it began surveying the question, a clear minority of Americans who are still euphemistically "pro-choice" on the question of abortion. I have posted it here because the chances of seeing it or something similar in establishment media reports is somewhere between slim and none: Race Relations Amazement: Obamas 'Walked the Streets -- and No One Shot at Them'

Melissa Harris Lacewell penned "Why blacks are more optimistic about race" for Friday's Philadelphia Inquirer.  As might be expected, the associate professor of politics and African American studies at Princeton University and author of the breathlessly anticipated "Sister Citizen: A Text for Colored Girls Who've Considered Politics When Being Strong Isn't Enough," is very, very happy with Barack Obama.  But readers may be at least mildly surprised at what she considers the highlight of his inauguration:

But the best part of Jan. 20 was that Barack and Michelle got out of the bulletproof black Cadillac and walked the streets -- and no one shot at them. I know we are not allowed to say it, but one reason black people believe race relations have improved in America is because Obama lived through the primaries, the election, the inauguration, and now through 100 days.

She claims "we are not allowed to say it," yet then does exactly that.  She goes on to cite various Obama acts that she deems accomplishments.  Closing Guantanamo, signing the Lilly Ledbetter Fair Pay Act, capping executive pay, and performing a "deft move of racial defiance by proxy" through attorney general Eric Holder's terming the U.S. a nation of cowards are some of the highlights.  Others came when he "dapped up" Hugo Chavez, "hung out" in Canada, "fired the head of General Motors, something most people didn't even know an American president could do," and "established serious street cred."

As Kathleen Sebelius was sworn in as Secretary of Health and Human Services on April 28, the media continued its biased coverage of her controversial appointment. News outlets ignored the reason GOP senators had delayed her confirmation - her pro-abortion extremism - and focused instead on the importance of having the Secretary in place to combat swine flu.

But the media failed to note that since the creation of The Department of Homeland Security epidemic-fighting efforts are no longer headed up by HHS. Homeland Security is supposed to work with the Center for Disease Control. The CDC is led by Acting Secretary Richard E. Besser since the Obama Administration has yet to nominate anyone for the top job, something the media, with exception of CNN's Ed Henry, haven't reported.

An interview with Former Secretary of HHS Donna Shalala on "Fox and Friends" April 29 asks if having no director at the department had an impact on the swine flu crisis.  Shalala said, "If you remember we transferred the emergency powers for this kind of outbreak to the Department of Homeland Security when it was created. So that power is no longer in HHS. There is no question though that the CDC plays a lead role here and it's very important to get a CDC director as well as the Secretary sworn in."

WaPo: 'In Washington, The Obama Girls Are the Latest Craze'

Think Obamamania is limited to only His Messiahship and Michelle Obama's well toned arms and J. Crew wardrobe?  Think again.  Today's front page of the Washington Post features "Move Over, Miley. In Washington, The Obama Girls Are the Latest Craze" by staff writer Ellen McCarthy.  The tone of this thoughtful analysis is set early in the article:

They lap up every shred of information about the first daughters, dream about meeting them and strategize ways to make it happen. Minivan rides and dinner table conversations are dominated by questions about the girls: What's their favorite food? What kind of dog did they get? Where can I get a coat like Malia's?

Later we learn that fascination with the young ladies "may also have a great deal to do with President Obama's popularity in the country and the region -- he won an overwhelming majority of Washington area votes and enjoys significant approval ratings."

“People are looking for something to criticize.” Yes, Barbara they are. And you were once among them.

Barbara Walters took exception to complaints from some that the Obamas made a royal mess of British protocol when meeting the queen of England. However, just over a year ago, Walters herself sniffed at the Bush White House for sending her a Christmas card containing [gasp!] “Scripture.”

On the April 2 episode of “The View,” the co-hosts discussed the murmurings that the president and first lady broke protocol when meeting the queen of England. Walters got visibly upset, waving her hands and speaking in a high, mocking tone saying, “And then people criticize because you know people are looking for something to criticize,” she said. “It makes me unhappy we are always looking for something to criticize, ‘Why did she put her arm around the queen?’.”

CNN's Jack Cafferty gave an interview to the Media Bistro's "Media Morning Menu" podcast on Thursday and rhapsodized about the "bright" and "terrific" Barack Obama. Talking to hosts Steve Krakauer and Glynnis MacNicol, the "Situation Room" contributor cheered on the new President. He enthused, "...I'm pulling for the guy. I like him. I think he's terrific."

After being asked by Krakauer if it's too early for journalists to start complaining about Obama's ability to change the country quickly, the host of CNN's "Cafferty File" segment agreed and then acknowledged, "Well, you know, I haven't been critical of the Obama administration." In contrast, Cafferty (see file photo above) was very critical of George W. Bush and his administration. Indeed, he attacked the ex-President during the podcast, claiming America "was badly damaged following the eight years of George W. Bush and that collection of morons that he had around him running this country into a ditch."

Cafferty seemed more interested in praising Obama, however. Asked whether he thought the President could turn things around, the CNN host described himself as "hopeful" and gushed, "I like him a lot. I think he's a bright guy. I like the fact that he's visible and that, you know, he's attempting to bring some transparency and some legitimacy and honesty to the office, which has been missing for a while." 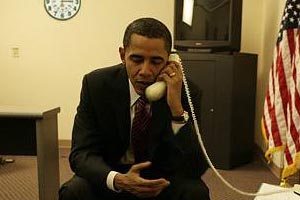 Just when you think the president couldn’t possibly go back on stage, there he is again, explaining all the wonderful things he can do with your money. In the best tradition of celebrity philanthropists, he’s giving his time, his face and his teleprompter skills to a cause that means a lot to him.

Oh, the cynics might say it’s what he does instead of governing, but the cynics don’t understand his sincerity. They don’t realize that he knows how blessed he is, and that he’s compelled to compel you to give back.

Anyone who has followed the decline of General Motors and Chrysler since the two companies received a combined $17-plus billion in bailout money in December won't be surprised at the news that they need more -- or at the government's convenient weekend timing of the news.

The financial cliff on which Chrysler stands was a given by the time its first bailout installment arrived. But, as shown in early March in a post by yours truly at BizzyBlog (mostly mirrored at NewsBusters), GM's sales non-performance has deteriorated to the point where it has become worse than Chrysler's during the two months following the George W. Bush-decided, Barack Obama-supported bailout decision:

AP: 'Obama Rhetoric, Reality Clash' But It's Not Really His Fault

In office two months, he has backpedaled on an array of issues, gingerly shifting positions as circumstances dictate while ducking for political cover to avoid undercutting his credibility and authority. That's happened on the Iraq troop withdrawal timeline, on lobbyists in his administration and on money for lawmakers' pet projects.

But just wait.  Although it's true that Obama is breaking promises faster than he made them, we can't hold that against him.  Sidoti explains: