Following fawning network coverage of President Obama’s farewell address on Tuesday night, on Wednesday, the NBC, ABC, and CBS morning shows continued the lovefest by devoting another 16 minutes and 5 seconds of air time to the speech. That stands in stunning contrast to the paltry 55 seconds the same morning shows offered to then-President George W. Bush’s farewell address in 2009.

In addition to the glaring double standard in the amount of coverage, the tone was also radically different. The news briefs on Bush's farewell painted the address as defensive, but Obama's parting remarks were cheered as an "emotional" "call to action" and a "warning" about the fate of American democracy. There was no attempt to fact check any of the President's assertions nor remind viewers of any of the controversies and scandals that plagued his administration. The media have a long history of mourning the end of Democratic presidencies while bidding good riddance to Republican chief executives.

NBC’s Today, with it’s four hour runtime, provided the most coverage to Obama’s farewell, totaling 7 minutes 54 seconds. Leading off the broadcast, co-host Matt Lauer proclaimed: “Emotional goodbye....President Obama uses his farewell address to take some veiled swipes at Donald Trump....This morning, the President's warning to all Americans as he prepares to leave the White house in just nine days.”

In the report that followed several minutes later, correspondent Kristen Welker sympathized with the outgoing commander-in-chief:

It was an emotional night last night in Chicago. President Obama saying good bye while also facing a legacy that's in jeopardy....President Obama returning to his adopted hometown of Chicago and bidding a final farewell to  an electrified crowd and a divided nation....The President giving a robust defense of his legacy, which could all but be dismantled by his successor....And while the President didn't directly rebuke Donald Trump, he acknowledged for him, this moment marks a setback. 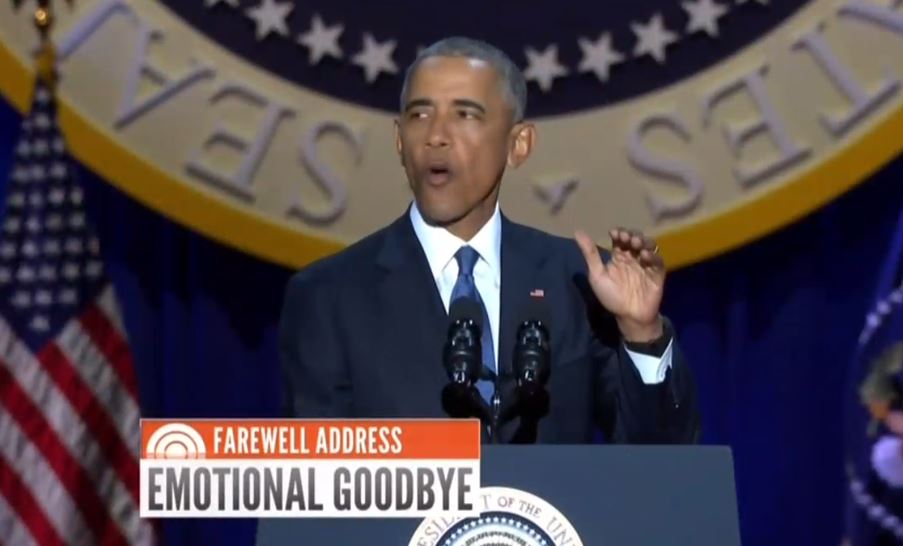 She then gushed over Obama’s remarks: “The speech was also a call to action, to protect the nation's democracy....And the President warned the biggest threats: hyperpartisanship, corrosive political rhetoric, and discrimination in all its forms.”

Welker concluded: “After eight years, and with his legacy on the line, America's first African-American president brought his historic journey full circle, returning to his original rallying cry.”

On January 16, 2009, the morning after President’s Bush farewell address, the Today show provided a scant 38 seconds to the speech, framing it as defensive. 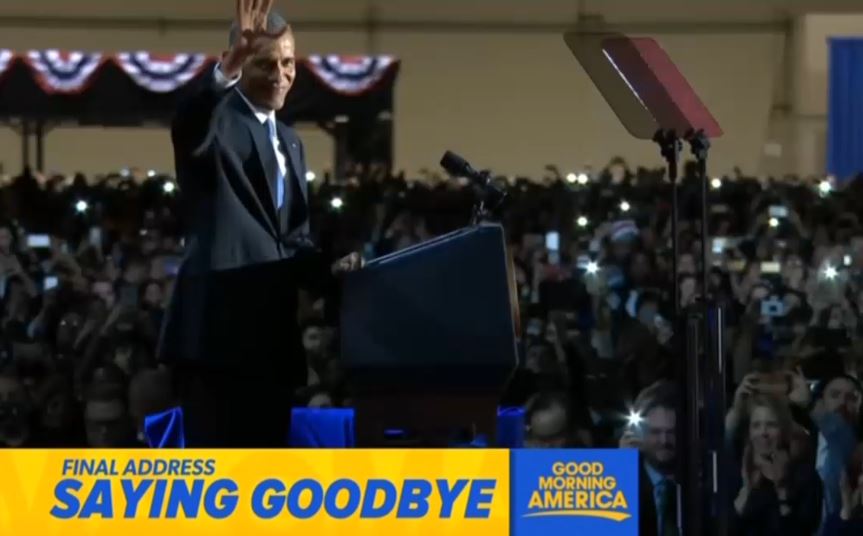 ABC’s Good Morning America on Wednesday featured 4 minutes 34 seconds of coverage and began with co-host Robin Roberts breathlessly declaring: “Saying goodbye. President Obama delivering his final address to the nation as president, thanking the country for his eight years in office....Warning about the forces that have the potential to drive us apart, but hopeful about America's future....The emotional farewell.”

Moments later, fellow co-host Michael Strahan hailed: “And he’s leaving the same way he came in, a lot of grace and a lot of dignity.”

Correspondent Tom Llamas announced: “The speech last night powerful, uplifting and at one point, the president getting very emotional....The President celebrating his victories....The President seeming to take shots at some of President-elect Trump's policies and positions....Rallying his supporters to fight for change.”

Talking to correspondent Jon Karl after the report, co-host George Stephanopoulos observed: “There were so many different speeches in one last night for President Obama....he came on to the national scene, talking about what holds – the values that holds all Americans together. Last night he was about what drives Americans apart.”

Yeah, this was his Obama realist speech, saying that he believes essentially that American democracy, something as fundamental as that, is under assault right now. He's worried about racial divisions, political divisions. He's worried about so much of what was behind the election. He never directly attacks Donald Trump, but it was a pretty profound warning.

He added: “And, George, overwhelmingly it was the message, ‘I am not going away.’ He’s going to be around here for these fights.” Stehanopoulos replied: “Yeah, he's been pretty open about the fact that the election results in November have changed his plans going forward about how involved to be.”

In 2009, GMA didn’t seem eager to have President Bush hang around, only noting his farewell address for 17 seconds. 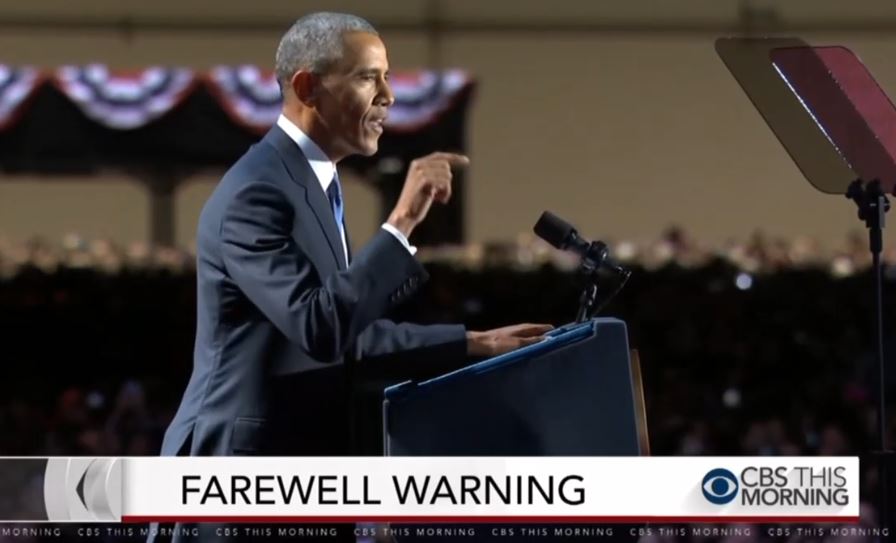 CBS This Morning offered 3 minutes 37 seconds on Obama’s goodbye, and at the top of the program, co-host Norah O’Donnell touted: “President Obama warns about threats to our democracy during an emotional farewell address and he offers a challenge to Republicans trying to dismantle his Affordable Care Act.”

In the 7:30 a.m. ET half hour, the hosts were giddy over how much tickets for the address were going for:

GAYLE KING: I saw that, I saw that. It’s a good play though.

NORAH O’DONNELL: It is good.

ROSE: No, I'm talking about last night to go to –

GAYLE KING: Oh, I thought you were talking about Hamilton. And you're right, they were scalping those, too, for $5,000.

KING: Yeah, I read that, too. It was a good speech, they say.

Introducing a report on the topic that followed, co-host Charlie Rose heralded: “President Obama is back at the White House after delivering his much anticipated goodbye address....He warned about threats to our democracy and urged all Americans to have faith in the country.” Correspondent Dean Reynolds highlighted: “In his farewell message...President Obama said it's every citizen's responsibility to be guardians of America's democracy....His remarks on income inequality seemed to reflect on the themes of the last election.”

When Bush left office the press were eager to move on and celebrate Obama’s inauguration. Now that it’s Obama turn to hand over the reins of power to a Republican successor, journalists only want to look back with nostalgia.