AP, Others Fret Over Same Number of Ex-Military Trump Appointments As Obama Originally Made

Some Democratic Party politicians who are searching for any and every possible reason to have a problem with President-Elect Donald Trump's cabinet appointments have latched on to the supposedly troubling fact that it thus far contains three retired generals out of 15 ultimate appointments. Naturally, their allies in the establishment press are amplifying these petty concerns.

The Associated Press's Lolita C. Baldor was a relatively early adopter, claiming a week ago, with alternating bouts of hyperventilation and hostility, that "Congress and others" are struggling with "a broader worry about an increased militarization of American policy" because of Trump's "move to pack his administration with military brass." Baldor has been an AP reporter for 11 years, covering matters relating to the Pentagon, counterterrorism and national security, so there's no excuse for her not recalling recent history which refutes her concern.

Here are Baldor's first five paragraphs in full (bolds are mine throughout this post):

A CABINET OF GENERALS? TRUMP'S CHOICES GET MIXED REVIEWS 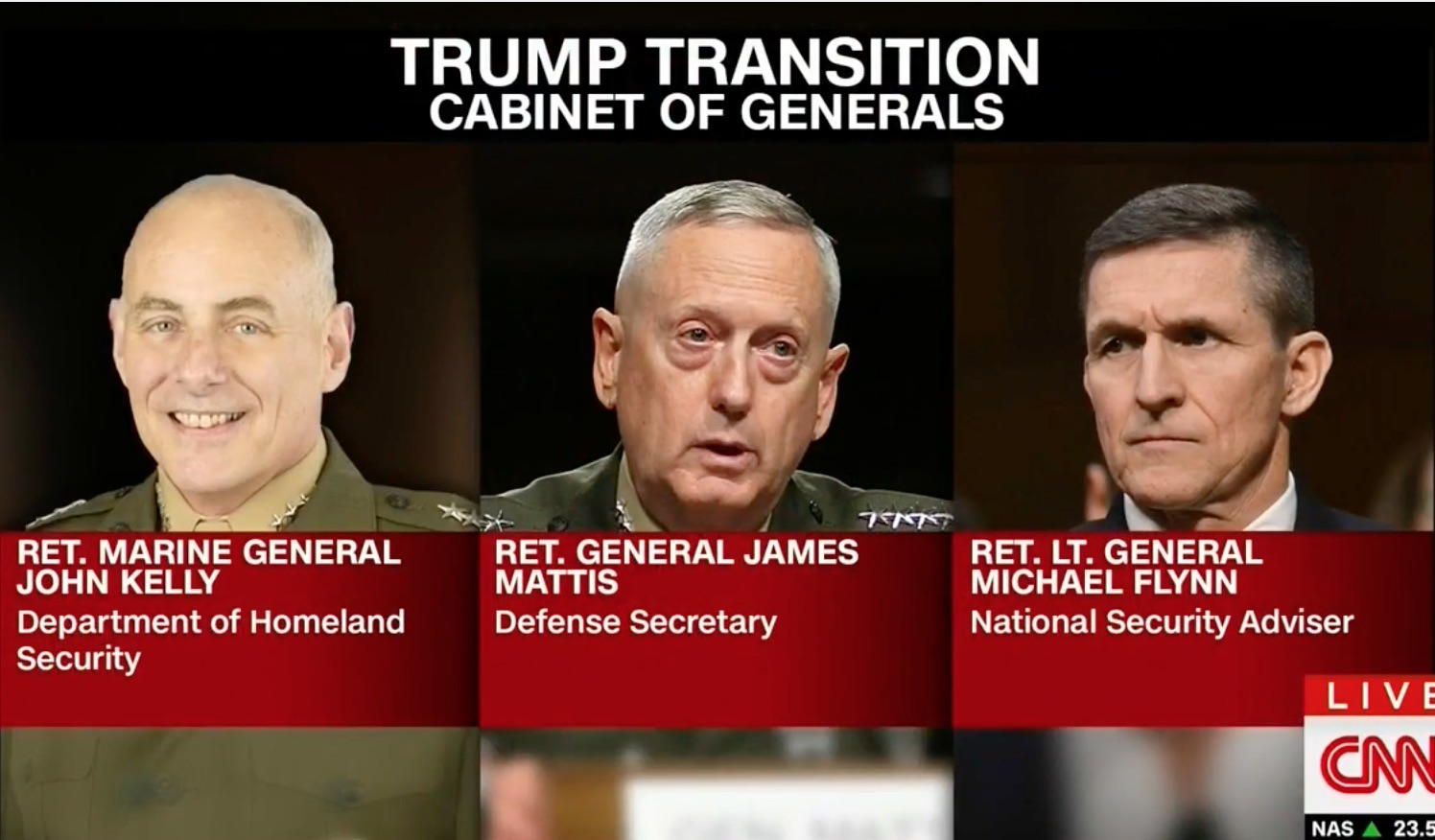 Donald Trump's move to pack his administration with military brass is getting mixed reviews, as Congress and others struggle to balance their personal regard for the individuals he's choosing with a broader worry about an increased militarization of American policy.

No fewer than three combat-experienced retired Army and Marine leaders, with multiple deployments in Iraq and Afghanistan, are on tap for high-level government jobs normally reserved for civilians. Others are entrenched in Trump's organization as close advisers.

All three had high-profile military careers leading top commands, and they are known for their willingness to offer blunt policy assessments publicly and privately. But their strategic advice could be colored by their years on the battlefront watching soldiers and Marines fight and die battling insurgents in the mountains of Afghanistan and the deserts of Iraq.

Those experiences can have markedly varied effects, making some officers a bit cautious when considering plans to send troops into battle but making others more likely to urge aggressive military responses to national security crises and less patient with the slow pace of diplomacy.

The theme of Baldor's opening paragraph is basically: "Yeah, these are all great guys, but (yuck!) they're military people — and military brass, no less." Based on how it's written, the AP reporter also appears to want readers who don't get past her opening paragraph to believe that a broad, bipartisan array of members of Congress has a problem with the number of military-experienced men Trump has selected. Later paragraphs predictably show that only Democrats have voiced such concerns.

"No fewer than three" — How could Donald Trump possibly name three "combat-experienced leaders"? Why, that's never happened before, and ... oh wait. It did happen in the most recent presidential transition, as Eddie Scarry at the Washington Examiner noted on Thursday (Hot Air) after the Washington Post and the Wall Street Journal added to the pile-on:

Flashback: Obama had three 4-stars on his team and no one seemed to mind

News outlets ran a spate of articles and columns in recent days reflecting a level of anxiety over President-elect Trump choosing a number of retired generals for top positions in his White House.

But in January 2009, President Obama appointed the same number of retired high-ranking officers to posts that Trump has so far.

The jobs they filled were indeed different than the ones Trump's generals will fill. Much of the controversy over Trump's selections comes from nominating a retired general, only three years out of uniform, to be defense secretary, which is not the same as a retired general running the VA. Yet others focus squarely on the number of retired officers tapped so far, and the possibility that Trump will choose more.

... Press accounts of Obama's selection of two generals and an admiral seven years ago, however, were framed not as a sign that people should be wary, but more as an olive branch to an institution that didn't trust its new president.

The next bolded passage in Baldor's report treats "years on the battlefront" as if such experience is a handicap, and the final one supposedly tells us why. Although there is a good argument for having a civilian head at Defense, for which Mattis has been nominated, Baldor seems to believe, as a default assumption, that someone with no battlefront experience would be preferable for the national security and homeland security positions for which Flynn and Kelly have respectively been selected.

That's insulting nonsense, especially given that two of the nation's past three presidents, as well as President-Elect Trump, have no military experience. It's not difficult to argue that a president with only civilian experience who doesn't see value in constructive input from soldiers' and commanders' perspectives in those areas is not able to effectively carry out the office's duties as Commander-in-Chief.

JAKE TAPPER: Before you go, I know that some of your colleagues, Democrats, have expressed concerns about too many retired generals being in the Trump cabinet. You have the National Security Adviser General Flynn, and then also we've talked about General Mattis and General Kelly at the Pentagon and Homeland Security. Do you share their concerns or do you disagree?

REP. TULSI GABBARD: I don't share their concerns. In fact, as a veteran, and as somebody who’s still serving in the Army National Guard, I find it pretty offensive for people to outright discriminate against veterans.

Here you have generals who have literally spent their whole lives serving our country, putting service before self, putting their lives on the line to defend democracy. And yet people are criticizing them and discriminating against them, saying "Just because you served as a general previously, you are disqualified from serving in a high position of leadership in our government."

These people arguably have put far more on the line and are far more deeply personally committed to upholding and protecting our democracy than their critics.

As Brad Wilmouth and Matthew Balan at NewsBusters noted yesterday in separate posts, CNN came down with at least two cases of the "militarization" vapors on Thursday, so Gabbard's choice of platform to air her far more sensible views was more than appropriate.