USA Today: 'Hundreds of Thousands' Could Be Disenfranchised By Supremes Allowing Wisconsin ID Law to Stand

Today the U.S. Supreme Court, as the Associated Press's Scott Bauer reported, "turned away a challenge to Wisconsin's voter identification law," meaning that "the state is free to impose the voter ID requirement in future elections." Bauer then focused on the impact of the state's off-year primary elections on April 7.

Bauer's relatively tolerable (for him) report tagged the law as "a political flashpoint since Republican legislators passed it in 2011 and Gov. Scott Walker signed it into law." Meanwhile, demonstrating that he will accept leftists' claims at face value even when they can't possibly make any sense, Richard Wolf at USA Today relayed a ridiculous claim made by the law's opponents (bolds are mine): 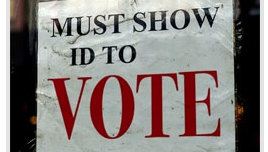 The decision is a setback for civil rights groups that contend the law could disenfranchise hundreds of thousands of residents who lack proper ID — particularly racial minorities, seniors, students and people with disabilities.

Let's be clear. Opponents are claiming that this one law in the Badger State could "could disenfranchise hundreds of thousands."

For heaven's sake, Richard. That contention is obviously horse manure, and you've treated it as if it could be true.

In 2014, about 2.4 million ballots cast were cast in the Wisconsin Governor's race. Opponents of voter ID would have us believe that such a law might reduce turnout by at least 8 percent (at least 200,000 people "disenfranchised" divided by 2.4 million). That's 3-4 times the alleged rate of turnout reduction of (2 to 3 percent) reported by the Associated Press after the federal government's Government Accountability Office reached that conclusion in a very questionable study which compared 2012 and 2008 election results in two states.

The study is questionable because the GAO itself characterized its works as "a quasi-experimental analysis," something the AP item found at Politico, which characterized it only as "a nonpartisan congressional study," did not disclose. Additionally, GAO noted, "the Kansas, Tennessee, and Arkansas Secretary of State Offices disagreed with GAO’s criteria for selecting treatment and comparison states and Kansas and Tennessee questioned the reliability of one dataset used to assess turnout." Though the GAO claims to have somehow "controlled" for it (how one would do that is a mystery), Kansas Secretary of State Kris Kobach further noted that there was a U.S. Senate contest in his state in 2008, but not in 2012. And of course, no one dares to mention the possibility that many blacks might have been far less enthusiastic about voting for President Barack Obama's reelection in 2012 than they were the first time around in 2008.

Other older studies, including one from the Heritage Foundation, have shown that voter ID laws have "do not reduce turnout."

Voter-ID proponents made a similar contention about the possible "disenfranchisement" effect in Virginia. The Washington Post, to its embarrassment, originally bought into an outlandish claim by Virginia's State Board of Elections that 450,000 Virginians might lack proper ID. Though the claim was quickly debunked, the paper would only back down to 200,000. The actual number is far, far lower. A supposedly helpful Post letter writer breathlessly informed readers that Fairfax County has "over 13,000" adult residents with no driver's license. Projecting that result onto the rest of the state's population, the result would be only about 100,000 — even before considering the fact that other forms of ID are acceptable at the polls.

USA Today's Richard Wolf had no business treating voter-ID opponents' claim that "hundreds of thousands" could be disenfranchised by Wisconsin's law as credible.

Wolf also wrote that the Badger State's law was written to prevent what he called "alleged voter fraud."

Too bad for Wolf that voter fraud isn't just "alleged," it's real.