In his coverage of Friday morning's stellar jobs report, the Associated Press's Chris Rugaber came up with a couple of doozies aimed at curbing readers' enthusiasm.

The AP economics writer half-expected that employers would rein in their hiring over confrontational rhetoric President Donald Trump and other foreign leaders have recently engaged in over trade and tariffs. He also implausibly framed the record-low black unemployment rate of 5.9 percent merely as evidence that employers are just now finally "taking chances" with potential workers "they had previously ignored."

Rugaber waited until his 19th paragraph to get around to introducing black unemployment, thereby treating it as less important than President Donald Trump's protocol-breaking "Looking forward to seeing the employment numbers at 8:30 this morning" tweet (brought up in Paragraphs 10 through 14) posted an hour before the jobs report's release.

He also presented the record-low rate in about the most negative way imaginable:

The black unemployment rate never fell below its previous 2000 low of 7.0 percent until five months ago.

Robust hiring of blacks has occurred since the beginning of 2017, but especially during the past 13 months. May's black unemployment rate was 25 percent lower than it was in April 2017. During those 13 months, black employment has increased by 585,000. That's a very disproportionate 26 percent of the 2.313 million Household Survey jobs added during that period. Roughly 12.6 percent of the total U.S. population is black. 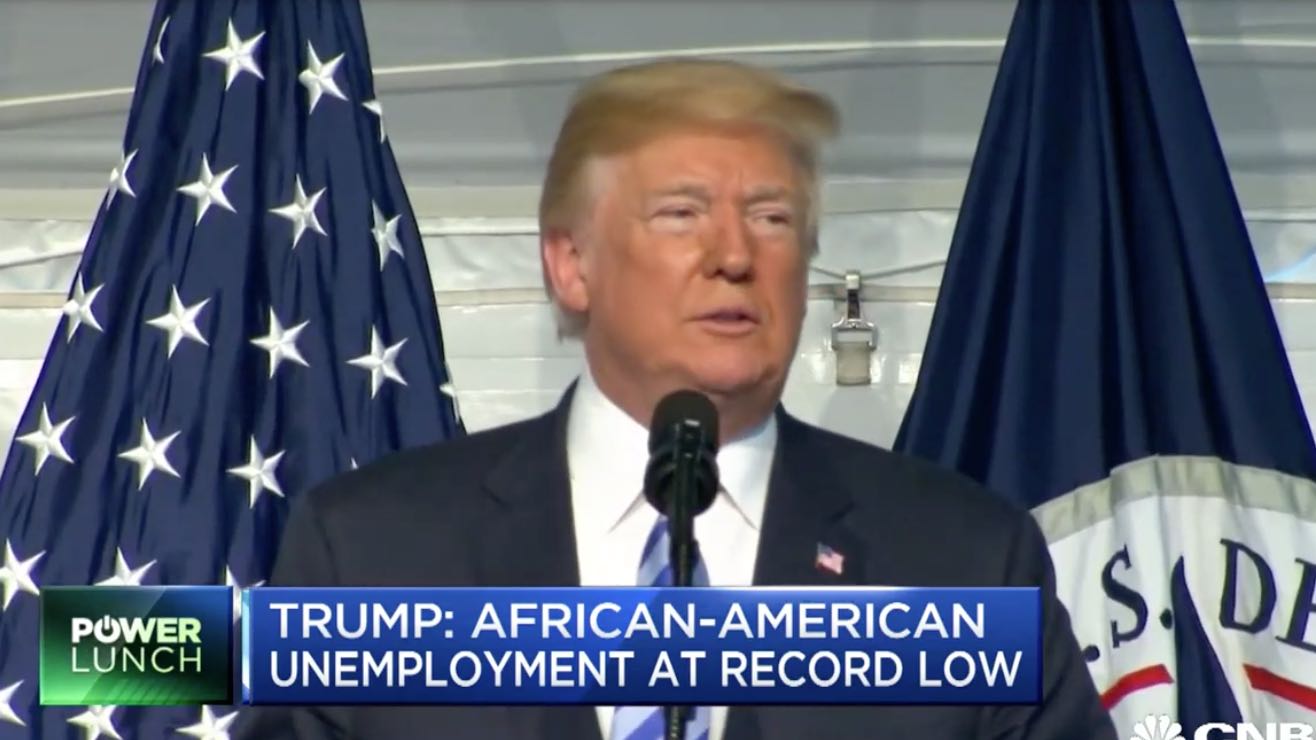 Rugaber also failed to note that the Asian unemployment rate dropped to a record-low, microscopic 2.1 percent. That rate is low enough to lead one to question whether economists' traditional definition of "full employment," which has ranged from about 3.5 percent to 5.5 percent during the past 60 years, is too high. (5.5 percent was the rate Moody's Mark Zandi suggested in early September 2014, perhaps in the interest of making the economy seem better than it really was ahead of that November's congressional elections.)

Rugaber's obsession over trade was present in both the headline and content of his pre-release narrative, where he predicted that Friday's report would be strong "despite uncertainty caused by trade disputes," and carried into his post-release report. Trade maneuvering bears watching, but the distance from the current strident bickering to steep, potentially economy-harming tariffs and trade wars is quite far.

Perhaps the press would be less obsessed with the trade issue if more business journalists had reported on all of what J.P. Morgan CEO Jamie Dimon, a longtime Democrat donor, said at an investor conference on Friday. Many press outlets took note of Dimon's concern about trade — "I do think that this trade stuff is a negative" — but almost all of them missed his crucial point about the impact of last December's U.S. corporate income-tax rate cut and its long-term impact on America's trade position:

CNBC's Rick Santelli understood the significance of Dimon's statement, and brought it up (paraphrased, based on a colleague's earlier tweet) after Friday afternoon's market close:

RICK SANTELLI: Finally, the biggest thing of the day in my opinion, Jamie Dimon.

Here's what he said: "Lower U.S. tax rates are making foreign competitors nervous about keeping up."

You're darned tootin'! And we talked about that when they were working on the tax rate.

You either empower or you discourage. It's about small businesses. They're empowered. The rest of the globe? Not so much.

Of course they're going to come around. Once again, the U.S. is going to turn the global market.