In a Saturday op-ed in the Washington Post, Harvard constitutional law professor Laurence H. Tribe wrote that "The time has come for Congress to launch an impeachment investigation of President Trump for obstruction of justice." Tribe says it should happen now, because "To wait for the results of the multiple investigations underway is to risk tying our nation’s fate to the whims of an authoritarian leader." (Conviction first, trial later.) To make his case, Tribe distorted both past history and current reality, while the Post failed to disclose key matters about the professor's entanglements which readers deserve to know.

Somehow (we know why), Tribe, who was considered a potential Supreme Court nominee in the 1990s, managed to open with what readers would have thought was a recital of U.S. presidents who were impeached or threatened with impeachment, and left out one name (bolds are mine throughout this post):

No American president has ever been removed for such abuses, although Andrew Johnson was impeached and came within a single vote of being convicted by the Senate and removed, and Richard Nixon resigned to avoid that fate.

How interesting that Tribe, by default, treated Johnson's case as more serious than Bill Clinton's in 1998-1999, given that the historical record clearly shows that Johnson's impeachment was a partisan exercise without a genuine basis in "high crimes and misdemeanors." The primary issue during impeachment was the President's firing of his Secretary of War after Congress had passed an act requiring its approval for all cabinet dismissals whose constitutionality had not yet been tested. In reality, the exercise was a pretext for getting rid of Johnson because of his resistance to punishing the South after the Civil War and his vetoes of "legislation that Congress passed to protect the rights of those who had been freed from slavery."

Obstruction of justice was the first count in the articles of impeachment against Nixon and, years later, a count against Bill Clinton. In Clinton’s case, the ostensible obstruction consisted solely in lying under oath about a sordid sexual affair that may have sullied the Oval Office but involved no abuse of presidential power as such.

If you took Tribe's rendition at face value, you would think that the only person who lied under oath was Clinton himself. Sorry, Larry. The obstruction was more than "ostensible," and involved influencing many other people to lie on his behalf or avoid testifying against him, as the related Article of Impeachment, carried for the historical record at the Washington Post itself, clearly shows:

1) ... Clinton corruptly encouraged a witness in a Federal civil rights action brought against him to execute a sworn affidavit in that proceeding that he knew to be perjurious, false and misleading ...

2) ... Clinton corruptly encouraged a witness in a Federal civil rights action brought against him to give perjurious, false and misleading testimony ...

3) ... Clinton corruptly engaged in, encouraged or supported a scheme to conceal evidence that had been subpoenaed ...

4) ... Clinton intensified and succeeded in an effort to secure job assistance to a witness in a Federal civil rights action brought against him in order to corruptly prevent the truthful testimony of that witness ...

5) ... Clinton corruptly allowed his attorney to make false and misleading statements to a Federal judge characterizing an affidavit, in order to prevent questioning deemed relevant by the judge. ...

6) ... Clinton related a false and misleading account of events relevant to a Federal civil rights action brought against him to a potential witness in that proceeding, in order to corruptly influence the testimony of that witness.

7) ... Clinton made false and misleading statements to potential witnesses in a Federal grand jury proceeding in order to corruptly influence the testimony of those witnesses. ...

Thus, Clinton co-opted or misled many individuals in attempts to influence or cause false testimony.

To borrow from Tribe's Saturday piece: "To say that this does not in itself rise to the level of 'obstruction of justice' is to empty that concept of all meaning."

But of course, Tribe instead made that statement about President Trump's actions to date. So let's detail what the professor considers Trump's alleged obstruction of justice, starting here: 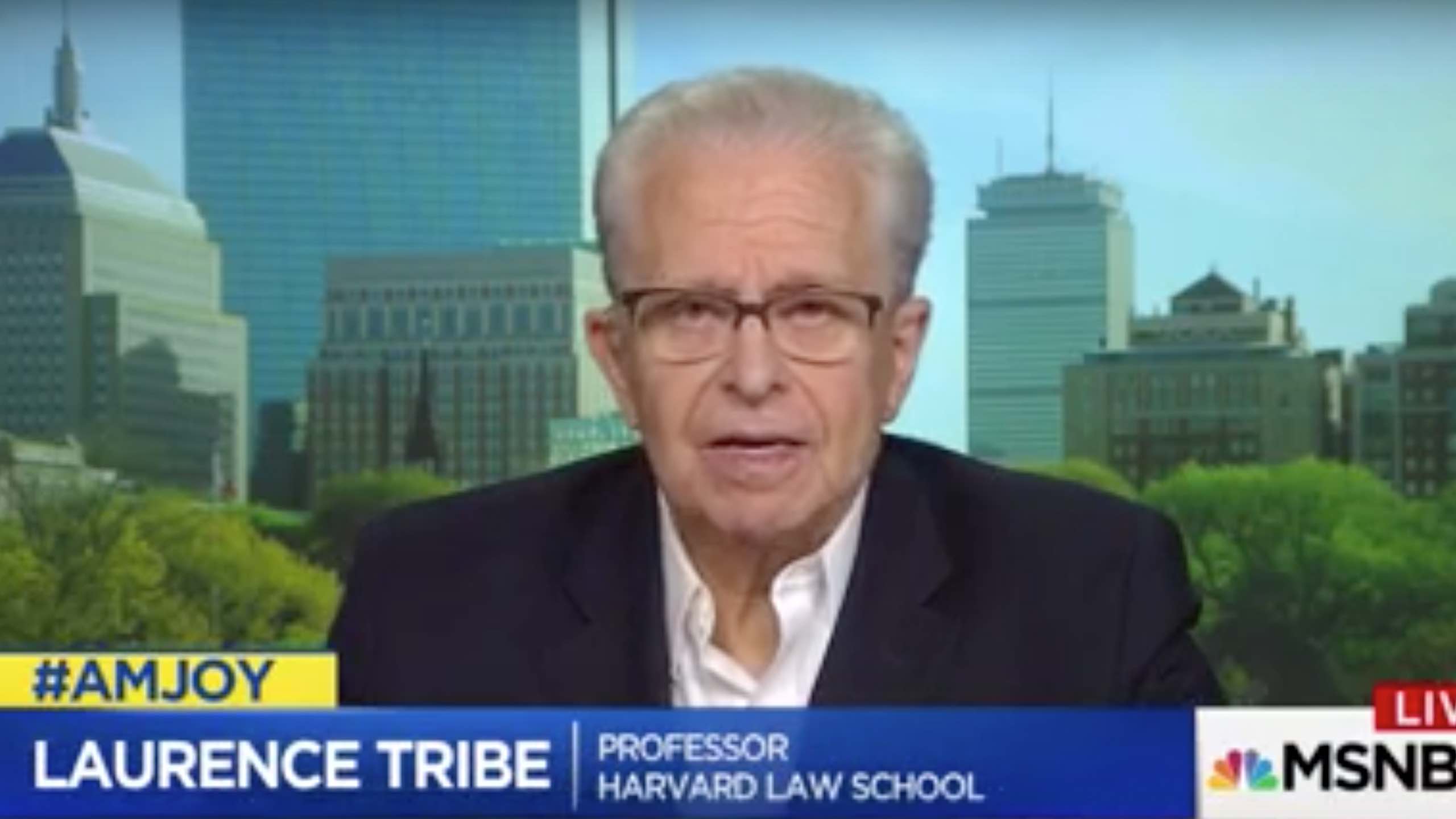 Comey’s summary firing will not stop the inquiry, yet it represented an obvious effort to interfere with a probe involving national security matters vastly more serious than the “third-rate burglary” that Nixon tried to cover up in Watergate.

(On Thursday, FBI Acting Director Andrew) McCabe assured the (Senate Select Intelligence) committee that Comey’s dismissal had not affected any FBI investigation. “The work of the men and women of the FBI continues despite any changes in circumstance, any decisions, so there has been no effort to impede our investigation to date,” he said.

Consider, too, how Trump embroiled Deputy Attorney General Rod J. Rosenstein and Attorney General Jeff Sessions, despite Sessions’s recusal from involvement in the Russia investigation, in preparing admittedly phony justifications for the firing on which Trump had already decided.

Wrong again. The reasons why Rosenstein recommended Comey be dismissed are genuine. A full reading of his letter to Attorney General Jeff Sessions demonstrates broad, bi-partisan support — "shared by former Attorneys General and Deputy Attorneys General from different eras and both political parties" — for his rationale.

Tribe's basis for Rosenstein's work being "phony" also relates to President Trump's assertion that he really wanted to fire Comey anyway. Tribe should know that in the real world, the boss often puts up with subordinates they'd like to fire until they have what they need to irrefutably justify it. Then they put the hammer down. Though it was arguably not the best thing for Trump to have admitted his mindset, there's nothing inherently wrong with it, and it doesn't change the truth of anything Rosenstein wrote. More fundamentally, given that he has the authority to fire the FBI Director at any time, neither Trump's move nor his admitted desire to get rid of Comey is in any way obstructionist.

Trump accompanied that confession with self-serving — and manifestly false — assertions about having been assured by Comey that Trump himself was not under investigation.

Unfortunately for Tribe, as best we can tell at the moment, Trump's assertions are manifestly true, based on this statement from Republican Senator Charles Grassley of Iowa, which is in turn based on Comey's testimony before the Senate Judiciary Committee:

(Democratic) Senator (Dianne) Feinstein and I heard nothing that contradicted the president's statement.

Again, back to Tribe (link is in original):

Further reporting suggests that the encounter was even more sinister, with Trump insisting that Comey pledge “loyalty” to him in order to retain his job.

Trump contends that the "reporting" by the New York Times, which is based on the account of two anonymous sources, is false. Trump told Fox News's Jeanine Pirro on Friday that, although he believes that asking such a question would not be inappropriate, he did not ask it. The story at the Times will have no credibility until the sources have the integrity to identify themselves.

Tribe wrapped up his screed by demanding that the 2018 congressional elections be made a referendum on impeachment:

... the crucial thing is that the prospect (of impeachment) now be taken seriously, that the machinery of removal be reactivated, and that the need to use it become the focus of political discourse going into 2018.

For that prospect to be taken seriously, one needs to make a serious argument. Tribe did not do so, but the Post was still all too willing to give him precious access to its ink and bandwidth.

Predictably, the Post failed to disclose two very important points which would affect readers' understanding of Tribe's lack of objectivity and motivations:

Tribe thus has a vested interest in Trump's impeachment and removal. If it were to happen, he would avoid a likely embarrassing loss in the emoluments action, and he would minimize the potential negative professional repercussions of his unethical August actions.

The Post should have disclosed these matters — and of course, it didn't, thereby aiding and abetting Tribe's effort.

The paper, in the unlikely event it wishes to be intellectually honest, should change its current "Democracy Dies in Darkness" slogan to "Democracy dying in darkness is okay — as long as people we like end up being in charge."