Earth to the Press Which Praised It: Less Than Two Months in, Philadelphia's 'Soda Tax' Is a Disaster

In June, the City of Philadelphia, in what was hailed as a "historic moment for public health," passed a deliberately misnamed 1.5-cent per ounce "soda tax." What anyone with a lick of sense could have predicted would happen is happening, and the national press is mostly ignoring the tragic results.

The "soda tax" is far more than a tax on "sugary drinks," which is how the law was dishonestly packaged by lawmakers and in news reports when it was considered and passed. Its scope also includes drinks with "any form of artificial sugar substitute, including stevia, aspartame, sucralose, neotame, acesulfame potassium (Ace-K), saccharin, and advantame." Even flavored water gets taxed.

The tax is huge, amounting to a 45 percent to 100 percent increase in the final consumer cost of typically affected beverage products.

Despite the tax's size, Margot Sanger-Katz at the New York Times, as seen in a June 17 NewsBusters post, wrote that "If passed on to consumers, the (tax) increase is expected to substantially reduce sales of sweetened drinks." That's right, the reporter actually had some doubt as to whether any of the tax would be added to the final consumer cost of the product.

The tax, which took effect, on January 1, is already causing grocers to plan layoffs, according to a Tuesday story at Philly.com. The story contains a statement by Philadelphia Mayor Jim Kenney which in a sane world would lead to instant calls for his resignation (bolds are mine throughout this post): 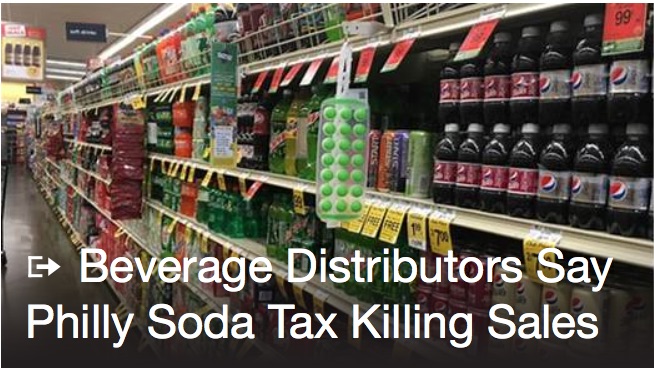 Two months into the city’s sweetened-beverage tax, supermarkets and distributors are reporting a 30 percent to 50 percent drop in beverage sales and are planning for layoffs.

One of the city's largest distributors says it will cut 20 percent of its workforce in March, and an owner of six ShopRite stores in Philadelphia says he expects to shed 300 workers this spring.

... In response, the city questioned the legitimacy of the early figures and predicted that customers responding to the initial sticker shock by shopping outside the city would return.

"I didn't think it was possible for the soda industry to be any greedier," Kenney said in an emailed statement. “ … They are so committed to stopping this tax from spreading to other cities, that they are not only passing the tax they should be paying onto their customer, they are actually willing to threaten working men and women's jobs rather than marginally reduce their seven figure bonuses."

The 1.5-cent-per-ounce tax on sweetened and diet beverages is funding nearly 2,000 pre-K seats this year as well as several community schools. The city hopes it will bring in $92 million per year for the education programs and to in part fund renovated parks and recreation centers.

... The tax, passed in June, went into effect Jan. 1 and is levied on distributors, who have passed it on to retailers.

It's hard to figure who the Mayor thinks should be eating (or in this case, swallowing) the tax, but he apparently just knows that somebody should.

Distributor and grocer margins are usually so thin that there's no realistic way either can be expected to absorb any of it. Based on the 45 percent to 100 percent increase range cited earlier, grocers would have to reduce the pretax retail price of their beverages across the board by percentages in that same range; at the upper end of the increase's impact, they would literally have to give their product away. Of course, that's not happening, and it never will. Thus, consumers who aren't going outside of Philly to buy their beverages — in other words, people who are without transportation and/or are likely poor — are bearing the brunt of the tax.

For those who missed it when it passed, the tax was deliberately sold as a "for the children" revenue-raising measure (i.e., for "nearly 2,000 pre-kindergarten slots and other programs") and avoided direct appeals to alleged public health concerns.

As to the tax take, things are not looking good, though the mayor is claiming all is well, according to a Thursday news report:

New figures released by the city this morning show the Philadelphia beverage tax brought in nearly $6 million in its first month.

That’s more than twice what the city projected but less than what it needs to collect each month to fund Mayor Jim Kenney’s ambitious anti-poverty program.

... Kenney has been irritated by retailers’ and distributors’ complaints that the tax might force them to cut hours or lay off workers– calling it the fear mongering that accompanies any new tax.

Eventually the city needs to collect $7.5 million a month from the tax to pay for universal pre-K, community schools and a facilities rebuild.

The city originally projected that $2.3 million would be collected in January. Why the first month estimate was so low is a mystery. Regardless, there's no good reason to expect that the sales reductions cited above won't continue, and that getting to $7.5 million per month in tax collections will be difficult.

But even if the city miraculously realizes its anticipated tax take, it's clear that the tax was passed fully anticipating a huge sales drop (a reported 27 percent). Yet no one thought (or cared) that grocers might have a harder time keeping the lights on and holding to the same levels of employment after such a huge loss in sales.

And it's not just grocery store employees — Besides the poor, the tax is mowing down another key Democratic Party constituency. A Wednesday report from Philly's local CBS affiliate tells readers:

Sources with Teamsters Local 830 say that layoffs are “imminent” and that some workers have seen their take-home pay drop by 50 to 75 percent because they’re moving less product.

Many readers probably didn't know that drivers' pay, even that of union drivers, is usually almost completely dependent on the amount of product moved. The Mayor and the council members who passed the tax appear not to understand that, and seem not to care at all how much and how obviously the tax is hurting the city's economic growth. In Philadephia, Idiocracy isn't a cautionary tale. It's apparently a user's manual.

When it passed, the tax got lots of favorable national coverage, including several mentions on Big 3 broadcast news shows. Now that its real-world results have become visible, establishment press coverage has been sparse.