AP: Thanks Only to U.S. Reassurance and Help, Brexit 'Leave' Vote Won't Lead to UK's 'Demise'

Saturday at the Associated Press, aka the Admininstration's Press, Josh Lederman ran interference for President Barack Obama's conveniently timed Brexit vote flip-flop. Obama has now reversed his Aoril threat — and yes, it was a threat — that the United Kingdom would go to the "back of the queue" to get a U.S. trade deal if "Leave" supporters won the June 23 vote there on remaining in the European Union.

Well, "Leave" won. So Lederman was tasked, nine days after the vote, with telling the few readers following news not relating to Bill Clinton, Loretta Lynch and Hillary Clinton during the July 4 weekend that "President Barack Obama is backtracking on his warning" — except that he provided no direct quote from Obama to that effect. The most amazing passage from the AP reporter's dispatch is in his second paragraph, which must be read to be believed: 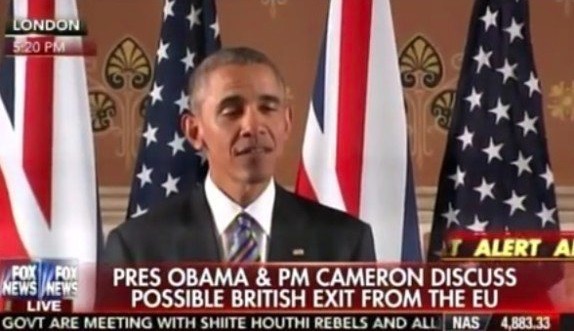 President Barack Obama is backtracking on his warning that Britain would go to the "back of the queue" for a U.S. trade deal, as he tries to contain the fallout of the U.K.'s decision to leave the European Union.

The shift in tone illustrates how Britain's vote has abruptly scrambled Obama's reality. Where the president had tried to encourage the U.K. not to rashly abandon the European bloc, he now must reassure Britain that its decision to do so won't mean its demise. His priority of locking in trade deals before leaving office now becomes a distant second, behind the more urgent task of restoring confidence in the financial markets and in Europe's future.

Let's translate Lederman's text into terms those who have a handle on reality will readily understand:

The final sentence of Lederman's second paragraph begins his process of blaming victorious "Leave" supporters for slowing down world progress. The AP reporter continued that effort in the following subsequent portion of his writeup:

... Before Britain's exit vote, or Brexit, Obama's administration was deep in negotiations toward a sweeping free trade deal with the 28-nation EU. Supporters of the Brexit had argued the U.K. wouldn't lose out on U.S. commerce because it could easily broker a one-on-one deal with the U.S. So during a visit to London in April, Obama sought to correct the record, arguing that wouldn't "happen any time soon."

... So it took many by surprise when, after Britain's referendum, the White House said the U.S. might still pursue a one-off deal with Britain, but it simply might take longer given the legwork that's already been done on the broader EU deal. Secretary of State John Kerry even said that Obama planned to pursue both deals "at the same time."

"He knows how to multitask," Kerry said this week.

In reality, neither is likely to happen before Obama leaves office.

Reeling from a decision many British leaders are already starting to regret, the U.K. will be too preoccupied with negotiating its EU exit to pursue complex trade talks with the U.S.

Darn it, see what all you "Leave" voters have done?

A point to expand on for another time is that if all of these "free trade agreements" require thousands of pages and intense, overarching industry-by-industry regulations, they really don't represent "free trade" as economist David Ricardo explained it, and we should stop pretending that they do.

Fortunately for Obama, he has the establishment press, but especially the Associated Press, at the ready to minimize the "fallout," to use the wire service's word, from his demonstrated impotence. Concerning the lack of a quote from Obama, Lederman either didn't have the guts to write that "The President himself has made no direct comment on this," or had one and decided that it wouldn't help Obama's cause to quote him.

A Republican or conservative President would never get such solicitous media treatment. It's clear that Lederman was given the assignment to present the Obama administraton's reversal in the most favorable possible light. Did he ever.

Obama's attempt to show support for a struggling ally casts him in the role of forceful free-trade advocate at a time when all of the major presidential candidates running to replace him are vocally opposed. Yet current and former Obama administration officials are operating under the assumption that Democrat Hillary Clinton, if elected, would come around to supporting Obama's trade deals after finding ways to reconcile specific concerns she's raised about jobs, wages and national security.

For the past year, Mrs. Clinton has opposed Obama's trade centerpiece, the Trans Pacific Partnership, after expressing support for it 45 separate times while she was the administration's Secretary of State.

The AP is telling readers that Obama's peeps know that Mrs. Clinton is only pretending to oppose TPP and other trade deals for voter consumption during the campaign, and that she doesn't really mean it.