In his second speech on Sunday morning's terrorist massacre in Orlando, Florida, President Barack Obama said  on Monday that "the shooter was inspired by various extremist information that was disseminated over the Internet," that "we see no clear evidence that he was directed externally," and that "this is certainly an example of the kind of homegrown extremism that all of us have been so concerned about for a very long time."

The press, led as usual by the Associated Press, is certainly cooperating with those characterizations. Presumptive Democratic Party presidential nominee Hillary Clinton has clearly made up her mind that Omar Mateen committed a "lone wolf" attack, and that banning "assault weapons" would somehow prevent future such attacks. The problem, of course, is what one means by "homegrown" and "directed."

Omar Mateen's Afghan immigrant father, Seddique Mir Mateen, imported his support for the terrorist Taliban into the U.S. as his son grew up. According to a former high school classmate, as reported Sunday evening in the Washington Post, on September 11, 2001, the teenaged Omar, likely affected by his father's influence, "stood up in class during the 9/11 attack and after the second plane hit the building he started jumping up-and-down cheering on the terrorist."

One influence readers almost definitely won't see in the establishment press — his name couldn't be found in searches at the AP or at the New York Times — is Marcus Dwayne Robertson, even though Fox News's Malia Zimmerman published her disturbing and infuriating dispatch early Sunday evening (link added by me; HT Conservative Treehouse; bolds are mine throughout this post):

The gunman who murdered at least 50 people in a Florida nightclub early Sunday morning was a follower of a controversial gang leader-turned-bank robber who was released from prison last year despite warnings from prosecutors that he would recruit people to carry out violent acts, sources told FoxNews.com. (The current toll of those murdered is 49, with the now-dead Mateen. — Ed.) 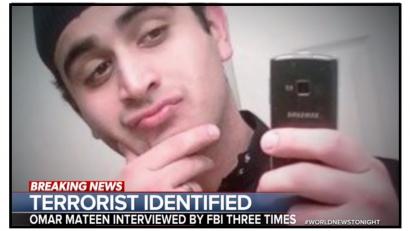 Omar Mateen, whose bloody siege inside a packed Orlando gay nightclub ended when SWAT teams stormed the building and killed him, was a radical Muslim who followed Marcus Dwayne Robertson, a law enforcement source said.

“It is no coincidence that this happened in Orlando,” said a law enforcement source familiar with Robertson’s history of recruiting terrorists and inciting violence. “Mateen was enrolled in [Robertson’s online] Fundamental Islamic Knowledge Seminary.”

... Robertson's school may not have been the only source of Mateen's spiritual guidance. The gunman was at the Islamic Center of Fort Pierce with Imam Shafiq Rahman two days before the nightclub attack, according to The Washington Post.

... FoxNews.com has reported extensively on Robertson, a former U.S. Marine who served as a bodyguard to the Blind Sheik involved in the 1993 World Trade Center Attack and led a gang of New York bank robbers called “Ali Baba and the 40 Thieves” before resurfacing in Orlando, where he started an Islamic seminary.

The Blind Sheik, aka Omar Abdel-Rahman, who clearly influenced Robertson, did not come to the U.S. until 1990 at age 52. The extremism Robertson has promoted and which influenced Omar Mateen is hardly "homegrown" or exclusively "disseminated over the Internet."

(While on the topic, why would we be comforted if Mateen really was a "lone wolf,"even though as seen in this post, he really wasn't in any meaningful sense? Apparently, lib-logic dictates that if we prevent "lone wolves" with "mental stability" problems from getting guns, we'll all be safer. Of course, this would in short order turn into an excuse to prevent any and all gun purchases, because after all, how can we really tell how stable a person is or will be? Next: Confiscation, because how can we trust our neighbors to be mentally stable enough at all times?)

The Fox News report identifies another potential reason besides the apparent desperate need to characterize Omar Mateen as a "lone wolf" why Robertson's name hasn't yet surfaced in the establishment press, and possibly never will:

... Prosecutors said wiretaps from 2011 proved Robertson instructed one of his students, Jonathan Paul Jimenez, to file false tax returns to obtain a tax refund to pay for travel to Mauritania for terror training.

Jimenez studied with Robertson for a year in preparation for his travel to Mauritania, where he would study and further his training in killing, suicide bombing, and identifying and murdering U.S. military personnel. He pleaded guilty in 2012 to lying to authorities and conspiring to defraud the IRS and was sentenced to 10 years in federal prison.

Robertson was arrested on a firearms charge in 2011 and pleaded guilty in January 2012. On March 14, 2012, federal authorities charged him with conspiring to defraud the IRS, which he was convicted of in December 2013.

... efforts by federal prosecutors to tack on another 10 years to his sentence, based on enhanced terrorism charges under the Foreign Intelligence Surveillance Act, were not persuasive enough for U.S. District Judge Gregory Presnell, who freed Robertson in June 2015 with time served.

Judge Presnell, who has since assumed senior status, is a Bill Clinton appointee. A video posted at YouTube of a local TV station's report at the time of Robertson's release describes what the judge did in stark terms: "Judge Gregory Presnell ... basically chose not to believe a would-be terrorist who confessed that Marcus Dwayne Robertson was training him to be a terrorist." The judge bought Robertson's argument that he was just "mentoring" the poor lad.

Finally, there's the elephant in the room, the influence of Islam itself as its adherents believe it is supposed to be practiced in everyday life, according to Islamic law.

The AP's coverage of Hillary Clinton's reaction tried to separate Mateen's antipathy towards homosexuals from his religion as follows:

Despite the 911 call from the club, Mateen's intentions seemed to become murkier when his Afghan immigrant father suggested another motive: anti-gay hatred. The father said his son got angry a few months ago when he saw two men kissing in Miami.

Thus, we're supposed to infer that "anti-gay hatred" really has nothing to do with any aspect of genuine Islam.

If so, why was Sheikh Sekaleshfar, an imam who believes that homosexuals must be put to death, a speaker at the Husseini Islamic Center in Sanford, Florida, a 35-minute drive from Orlando, just two months ago?

For those who think that this situation was a one-off, former federal prosecutor and National Review columnist Andrew McCarthy has news for you — it wasn't. Anyone who truly understands and advocates sharia law believes that gays must die (links are in original):

Killing Homosexuals Is Not ISIS Law, It Is Muslim Law
For nearly 25 years, we’ve been clinging to the fiction that groups such as ISIS are anti-Islamic.

... There are various ways to interpret Islamic scripture in order to attempt to evolve it out of violence. This, of course, does not change the fact that supremacist, fundamentalist Islam is a legitimate, mainstream, virulently anti-Western interpretation of Islam; but it does at least mean that there can be other mainstream versions of Islam that reject violence and Islam’s politico-legal system.

Sharia, on the other hand, is basically set in stone. (Or should I say “stoning”?) Even most Islamic reformers acknowledge that it badly needs reform — not that it can be reinterpreted, but that it needs to be changed. Its provisions and especially its draconian punishments were largely fixed a millennium ago. The mandate that homosexuals be killed is not from ISIS or al-Qaeda. It is from sharia — which draws on Muslim scripture.

... The inspiration for Muslims to brutalize and mass murder gay people does not come from ISIS. It is deeply rooted in Islamic law, affirmed by many of Islam’s most renowned scholars. This is why, wherever sharia is the law, homosexuals are persecuted and killed. See, for instance, this 2014 Washington Post report listing ten Muslim countries where homosexuality may be punished by death (Yemen, Iran, Mauritania, Nigeria, Qatar, Saudi Arabia, Somalia, Sudan, United Arab Emirates, and Iraq — notwithstanding its new, U.S.-supported constitution).

Note, again, that Omar Mateen is the American-born son of immigrants from Afghanistan, where homosexuality may also be punished by death — notwithstanding American nation-building efforts there for the last 15 years.

... The problem with mass immigration from sharia enclaves is not merely that trained terrorists may infiltrate the immigrant population. It is that sharia-adherent, assimilation-resistant Muslims will form sharia enclaves in the U.S., as they have throughout Europe, where young Muslims will be “radicalized” under our noses in the years to come.

Today, we have gotten another glimpse of radicalization, which is not “homegrown” but rather fueled by a foreign, anti-American, anti-liberty ideology.

McCarthy recognizes the folly of calling Omar Mateen a "homegrown terrorist" for what it is. As this post has shown, it's especially odious in this case because: